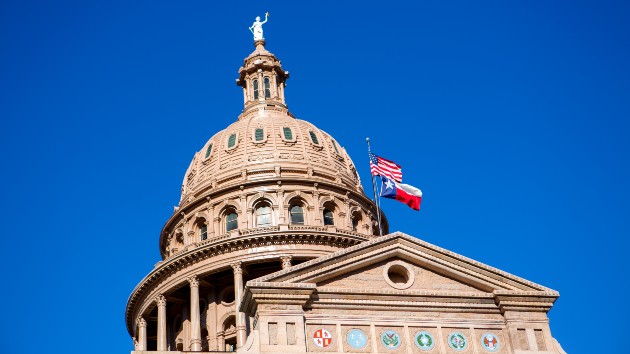 (AUSTIN, Texas) — After weeks of debate and political maneuvering, the nation’s next showdown over state voting rights lands in Texas on Thursday, when the Republican-backed House Bill 6 — which seeks to revise the state’s election laws — heads to a floor vote.

As written, HB 6 states the path to ensuring “election integrity and security” will come through “increasing criminal penalties” and “creating criminal offenses,” which Democrats and voting rights activists said amounts to voter suppression tactics that would disproportionately affect communities of color.

“We predict that if these provisions become law, that you’re going to have Anglo-watchers-slash-vigilantes disrupting polling places in primarily places where people of color vote (from) inside the polling place, and that voters will feel so uncomfortable that they will simply leave without casting their ballot,” said Nina Perales, who serves as vice president of litigation for the Mexican American Legal Defense and Educational Fund, during a Wednesday press call.

In its current form, the bill makes it a state felony for election officials to send out mail-voting applications to voters if they did not individually request the forms.

Additionally, the bill expands the access granted to poll watchers within polling places, and states that a poll watcher can only be removed “if the poll watcher engages in activity that would constitute an offense related to election fraud.”

Voting rights advocates point to this provision as an example of how the bill would promote voter intimidation, and said it sets the bar very high for the expulsion of a poll watcher who could otherwise engage in unsavory behavior. According to the Brennan Center for Justice, a non-partisan, independent organization that analyzes election rules, the bill essentially limits “the ability of election workers to protect voters against illegal disruption and harassment by ‘watchers."”

“If a poll watcher starts screaming, yelling, (or) arguing with a voter, (or) laying down on the floor, (or) banging pots and pans — poll workers would not be able to eject those individuals. That would be a crime. The only recourse for the poll worker would be to call the police and hope that the police would come,” Perales said.

Thursday’s vote is sure to set off a renewed round of backlash from prominent Democrats and voting rights activists who spent weeks decrying state Republicans’ push to advance dual pieces of election legislation in both the House and the Senate. Former presidential candidates and Texas locals, Julian Castro and Beto O’Rourke, as well as voting rights advocate, Stacey Abrams, have all spoken out against the advancement of the bills.

In addition to high-profile political voices, corporate giants like American Airlines, Microsoft, Dell and Unilever weighed in with their opposition to the legislation, which began progressing through the Texas legislature on the heels of the fallout surrounding Georgia’s revised election laws.

On Tuesday, more than 50 companies, business groups and industry leaders signed a letter calling on “lawmakers to uphold our ever elusive core democratic principle: equality.”

“We stand together, as a nonpartisan coalition, calling on all elected leaders in Texas to support reforms that make democracy more accessible and oppose any changes that would restrict eligible voters’ access to the ballot,” the letter said.

The state’s top Republicans have repeatedly voiced their opposition to corporate giants weighing in on the progression of the bills, as many companies continue to dig in on their positions against the legislation. A Republican-backed proposal to financially penalize entities that “publicly threatened any adverse action” against Texas in their opposition to election legislation was even briefly debated during the state’s budget debate in April.

Ultimately, the proposed amendment was not added to the budget, thereby upholding comments made by Texas Lt. Gov. Dan Patrick in April when he was asked if companies who were critical of the state’s election bills should lose financial incentives.

“This is not a quid pro, we don’t punish people because they disagree with us,” Patrick said at the time.

In a recent Wall Street Journal op-ed, Texas Sen. Ted Cruz took a different approach by castigating what he called “watch-me-woke-it-up CEOs” and announcing he would “no longer accept money from any corporate PAC.” He urged Republicans at all levels of government to follow suit.

“Enough is enough. Corporations that flagrantly misrepresent efforts to protect our elections need to be called out, singled out and cut off,” Cruz said.

Across the aisle, in one of the state’s most diverse cities on Wednesday, two of the region’s top Democrats — Houston Mayor Sylvester Turner and Harris County Judge Lina Hidalgo — refused to have their respective “state of the city” and “state of the county” events be produced by the city’s chamber of commerce, the Greater Houston Partnership, over the ongoing voting rights debate.

The pair said the decision was in response to the organization’s lack of expressed opposition to the advancement of the state’s voting bills, including HB 6.

“There is nothing partisan in voting suppression … when there are bills that engage in voter suppression, voter intimidation, restricting access to the polling place — that’s not partisan, that’s just downright wrong,” Turner said at a press conference, while urging business leaders to make greater strides in opposing the bill before it is enacted into law.