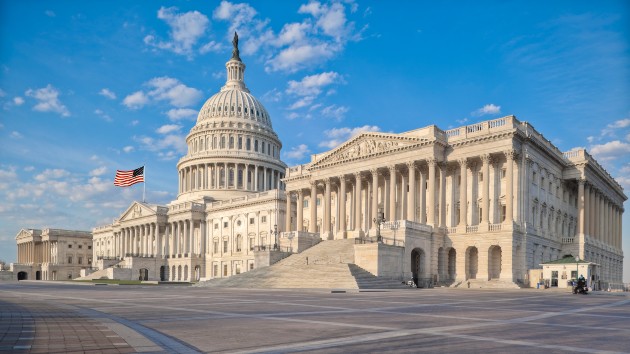 (WASHINGTON) — Republican lawmakers left a meeting with President Joe Biden Thursday optimistic that an agreement can be reached on an infrastructure package, but lawmakers must act quickly if they hope to strike a deal before the president’s fast-approaching deadline.

While Biden has long projected a desire to work across the aisle on an infrastructure plan, he’s also been clear that Democrats will forge ahead without Republicans if bipartisan talks don’t yield swift results. The White House wants to see “significant progress” on an infrastructure deal by Memorial Day and Biden is aiming for final passage by the end of the summer.

Republican Sen. Shelley Moore Capito, who is leading the Republican infrastructure effort, painted Biden as an “honest broker” and said that during Thursday’s meeting, the parties laid out next steps for trying to bridge the substantive divide between their two infrastructure plans.

“He was very open to suggestions as were we. I think it’s the beginning of — a good jump-start I think,” Capito said on Fox News. “We promised to come back with another offer that he will react to and counter offer. We did what we intended to do, which is get next steps, be very cordial and ready to deal.”

The Republican counter-offer, which is expected to be a more detailed version of the framework they presented to Biden Thursday, could come as soon as early next week, said Missouri Sen. Roy Blunt, who also attended the meeting.

Biden is then expected to counter that offer.

“We all know we need to move pretty quickly here,” Blunt said.

There’s limited opportunity to make legislative headway in the summer months because the Senate leaves town for Memorial Day, Independence Day and the August recess. The highway system and surface transportation systems expires in September, compounding the need for lawmakers to act swiftly.

The central sticking point left to be resolved is how broadly infrastructure ought to be defined.

Biden has proposed two infrastructure plans totaling about $4 trillion that fund everything from roads and bridges to a boost in the power grid, electric-vehicle charging stations, in-home care and public buildings, such as schools.

The administration branded some items in the package, like childcare and home care as “human infrastructure.” Republicans scoffed at that and offered a counter proposal, led by Capito, that focuses on “core” infrastructure. Their original framework would fund roads, bridges, ports, waterways, airports and broadband at about $568 billion.

To reach an agreement with Republicans, the White House is signaling it is willing to split its package and allow funding for traditional infrastructure to pass with some GOP backing.

It will then pursue use of a procedural tool called reconciliation to pass the more controversial aspects of the Democratic plan.

Biden used reconciliation, which allows the Senate to bypass the usual 60-vote threshold, to pass the $2 trillion COVID-19 relief bill down partisan lines in March — a move that left some Republicans with a bitter taste after they said the president failed to negotiate with them in good faith.

Some were skeptical that infrastructure discussions would play out differently, but Capito signaled Thursday that if Biden chooses to use reconciliation to pass the more controversial aspects of his plan, it won’t prevent Republicans from negotiating on a separate, more narrowly tailored traditional infrastructure bill.

Even if Biden musters a bipartisan success on “core infrastructure” it’s not clear he’d have the support of all 50 Democrats needed to pass the “human infrastructure” aspects.

Sen. Joe Manchin, D-W.Va., has said he supports a smaller, more narrowly tailored package, not unlike the one that Republicans are proposing. And he’s said he’d like to try to find a middle ground between Capito’s $568 billion plan and Biden’s much larger proposal.

Price is not necessarily a sticking point for Republicans, there’s wiggle room so long as the bill is tailored to traditional infrastructure.

Senate Republican Leader Mitch McConnell signaled earlier this week that the price tag could be as high as $800 billion.

“I made it clear that this was not a stagnant offer from us,” Capito said after suggesting she was potentially open to raising the price of the bill. “I didn’t want it to be perceived that way at all and I think that was clear. He made it clear that he’s sincere in wanting to pursue this and in the end we agreed if it doesn’t work, we’ll walk away friends.”

But while Republicans find cost negotiable, there are rigid lines on how to fund the bill.

Biden proposed funding his robust infrastructure plan by hiking the corporate tax rate, a non-starter for Republicans who see this as a referendum on the 2017 Trump tax bill, which some consider the most significant legislative achievement of the former president’s tenure.

“We’re not interested in re-opening the 2017 tax bill. We both made that clear to the president,” McConnell said following a meeting at the White House between Biden and the four Congressional leaders. “That is a red line.”

During their meeting Thursday Republicans tried to convince Biden that there are better ways to fund the package. They’ve proposed repurposing previously allocated unused money from the COVID-19 relief bills, as well as private-public partnerships and user fees, like tolls.

It’s not yet clear whether Biden is receptive to these funding models, but Republican optimism is clear.

“I think we moved the ball forward today,” Capito said.