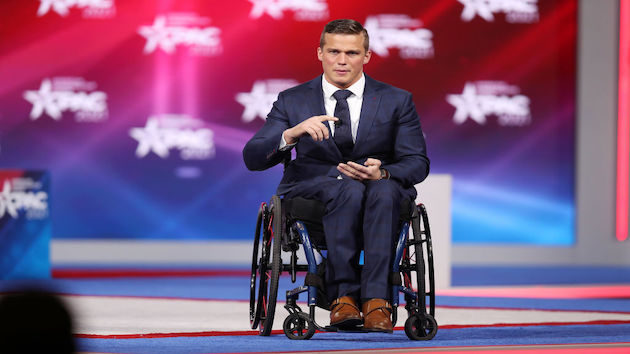 (WASHINGTON) — Republicans on Capitol Hill appeared frustrated with the weeklong controversy sparked by Rep. Madison Cawthorn, who made unsubstantiated claims in a recent interview that some of his colleagues invited him to sex parties and used cocaine.

“It’s pretty clear to me that Madison must have a far more active social life than any other member of Congress that I’m aware of,” Rep. Dusty Johnson, R-S.D., said Friday on Capitol Hill. “What he’s saying can’t possibly be true.”

The 26-year-old freshman Republican lawmaker from North Carolina earlier this month claimed that he had been invited to sex parties by colleagues and had witnessed representatives using cocaine in front of him.

He had been asked by the podcast host if his experience in Washington as a freshman lawmaker comported with the dark drama depicted in Netflix’s “House of Cards,” the story of an ambitious lawmaker’s murderous and cutthroat climb to the presidency.

Cawthorn continued on the podcast: “Or the fact that, you know, there’s some of the people that are leading on the movement to try and remove addiction in our country, and then you watch them do a key bump of cocaine right in front of you. And it’s like, this is wild.”

Cawthorn’s remarks sparked fury among his Republican colleagues on Capitol Hill this week, who angrily confronted the issue during a closed-door conference meeting Tuesday. At this meeting, House Republican Leader Kevin McCarthy pledged to speak to Cawthorn about the racy remarks.

On Wednesday, Cawthorn was hauled into McCarthy’s office to explain himself.

The meeting, which lasted 30 minutes, was attended by Cawthorn, McCarthy, House Republican Whip Steve Scalise and GOP Rep. Mike Johnson, who had been assigned to mentor the freshman lawmaker last year.

McCarthy told reporters following the meeting that Cawthorn “did not tell the truth” and that he had admitted to exaggerating his claims. McCarthy said he told Cawthorn to change his behavior, otherwise there would be consequences.

“This is unacceptable. There’s no evidence to this,” McCarthy said. “That’s not becoming of a congressman. He did not tell the truth.”

“In the interview, he claims he watched people do cocaine. Then when he comes in, he tells me, he says he thinks he saw maybe a staffer in a parking garage from 100 yards away and tells me that he doesn’t know what cocaine is basically,” McCarthy said.

He said he told Cawthorn that he had to “earn his trust” back, or else he could lose his committee assignments or face other punishment.

“He’s got a lot of members very upset,” McCarthy said, adding, “You can’t make statements like that, as a member of Congress; it affects everybody else and the country as a whole.”

A source familiar with details of the meeting with Republican leadership said Cawthorn clarified that multiple individuals were not involved with the sex parties, but that he was invited to a sex party by one colleague. When he was pressed to provide a name, Cawthorn refused and “backpedaled” his claims.

During his remarks to reporters, McCarthy pointed to other transgressions the young lawmaker had committed in recent months, including driving with a suspended license, inviting a congressional candidate on the House floor without permission and then lying about it and referring to Ukrainian President Volodymyr Zelenskyy as a “thug.”

Cawthorn’s office did not return multiple requests for comment to ABC News, nor has Cawthorn provided proof to back up his claims.

Sources familiar with the meeting told ABC News that the Republican leaders asked Cawthorn to issue a public apology and clarify his remarks.

Cawthorn has not done so, but he did send a letter to constituents and even issued a new campaign ad, in which he defiantly said, “I will never bow to the mob.”

“There are many who despise the great work we’re doing to represent western North Carolina, but I promise, I will stay focused on the work that still needs to be done in Washington for my beautiful district,” Cawthorn said.

Rep. Troy Nehls, R-Texas, who appeared visibly frustrated with Cawthorn during an interview with ABC News on Friday, called the allegations “irresponsible.”

“If you say something like that, you corroborate that with other people,” Nehls said. “Listen, we all make mistakes in our lives.”

“Allegations like that, if they’re not true, hurt the whole institution,” Bacon said. “I think the view of the conference is, if they’re true, name names.”

“Congress has got a low favorable rating, we’ve got to do better than this,” he said.

Both of North Carolina’s Republican senators — Richard Burr and Thom Tillis — said they won’t back Cawthorn in his upcoming primary race.

“On any given day, he’s an embarrassment,” Burr told reporters.

Democrats also pounced on the controversy.

“Not sure why Republicans are acting so shocked by Cawthorn’s alleged revelations about their party,” Rep. Alexandria Ocasio-Cortez, D-N.Y., tweeted. “One of their members is being investigated for sex trafficking a minor and they’ve been pretty OK w/ that. They issued more consequences to members who voted to impeach Trump.”

It’s been a dizzying week for Cawthorn, who is thought to have ambitions for higher office after unexpectedly winning a seat in Congress vacated by former GOP Rep. Mark Meadows, who left to serve as former president Donald Trump’s chief of staff at the White House.

Cawthorn has embraced Trump since taking office — saying he has called him up for advice in the last year.

The former president is clearly still on his side.

On Friday, Trump announced Cawthorn would be a guest at his rally in North Carolina next weekend.