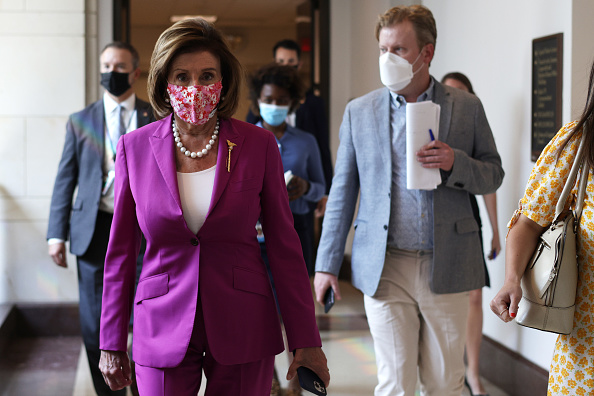 (WASHINGTON) — Republicans and Democrats on Wednesday battled over the new House of Representatives’ new mask mandate, with more than a dozen Republicans voting twice without masks, despite new guidance from the Capitol physician aimed at preventing fast-spreading COVID-19 infections.

House Speaker Nancy Pelosi, D-Calif., called House GOP Leader Kevin McCarthy “such a moron” Wednesday morning when asked about his criticism of the new mask mandate in the House.

“That’s the decision from the Capitol physician, a mandate from him,” Pelosi told reporters. “I have nothing to say about that, except we honor it.”

Asked about McCarthy saying the decision was not “based on science,” she replied, “He’s such a moron,” as she got into her car.

In a directive issued Tuesday night, The Office of the Attending Physician, Dr. Brian Monahan, said it was now required that all members and staff wear “medical-grade” masks throughout the House, unless members are speaking in the halls of the House or individuals are alone.

Members and staff will once again be prohibited from stepping on the floor to vote without a mask, or risk incurring fines.

The directive cited the increasing threat from the delta variant and noted House members travel weekly to and from areas of both high and low rates of disease spread. It also mentioned the new Centers for Disease Control and Prevention mask guidance for vaccinated people to wear masks indoors in where transmission is high or substantial, as well as recommending universal masking in schools.

“The same bureaucratic ‘public health experts’ who completely upended our society by pushing lockdowns and yearlong school closures now want to force Americans to return to pre-vaccine control measures. By forcing vaccinated Americans to return to masks, the Biden administration is not only casting doubt on a safe and effective vaccine, but contradicting why vaccines exist,” McCarthy said in a statement in response. “Make no mistake — the threat of bringing masks back is not a decision based on science, but a decision conjured up by liberal government officials who want to continue to live in a perpetual pandemic state.”

After meeting with the top doctor on Capitol Hill Wednesday afternoon, McCarthy took to the House floor to decry the return of the House mask mandate and to slam Pelosi for calling him a “moron.”

“Today, the Speaker who didn’t know her own science, and said names to people, broke her own rules. Twice today, I saw the speaker in a crowded room without a mask. Less than 24 hours after imposing a mask mandate,” he said.

“You don’t know the facts or the science!” he said. “Do you know what frustrates Americans the most? Hypocrisy.”

McCarthy claimed the vaccination rate for members of Congress is over 85 percent. “And, as of today, the transmission rate on the Capitol campus is less than 1 percent,” he continued. “Well, the facts would tell us this isn’t a hot spot, so the CDC recommendation doesn’t apply to us!”

At one point, the House was forced to vote on a motion to adjourn offered by Republican Rep. Chip Roy of Texas to disrupt proceedings, ostensibly over the mask mandate.

“This sham of an institution is doing nothing for the American people!” Roy yelled.

“We have people infected with Covid coming across the southern border,” he added, demanding that Dr. Fauci appear before Congress to testify about natural immunity. “Which is it? Vaccines or masks?”

“I don’t believe that masks make any difference,” Rep. Bob Good, R-Va., told ABC News when asked why he wasn’t wearing a mask. “If they’ve been vaccinated, what are they worried about a threat from me?”

When asked if he had been vaccinated, he said, “I don’t answer that question because it’s no one’s business.”

Rep. Pat Fallon, R-Texas, another unmasked member, said he had “double immunity” from the vaccine and a prior COVID-19 infection.

Rep. Byron Donalds, R-Fla., another unmasked and unvaccinated member, got into a shouting match with liberal Rep. Jared Huffman, D-Calif., who told him to “get vaccinated,” and continued the feud on Twitter.

“You can’t compel people to put something in their own body. People have to decide to do that for themselves,” Donalds said. “I’m 42, healthy, and I already had COVID.”

Asked about his colleague Rep. Clay Higgins, R-La., who was hospitalized despite believing he already had COVID, he said, “The reality is that people are going to make their own decisions.”

As for the possibility of spreading the disease to vulnerable people with preexisting conditions, he said, “Anybody would be concerned about that.”

Among the Republicans bristling at the return of the mask mandate on Wednesday was longtime opponent Rep. Lauren Boebert, R-Colo., who was seen throwing a mask back at a House staffer who offered her one.

According to two people who saw the exchange, Boebert threw a mask back at a staffer on the House floor and refused to put one on to comply with the latest rules. One person said she threw the mask on the ground.

Boebert’s office did not dispute the exchange, saying in a statement, “Rep. Boebert refuses to comply with Speaker Pelosi’s anti-science, totalitarian mask mandate. When offered a mask, she returned it with a quick slide across the table.”

Boebert could receive a $500 fine for breaking the new mandate. GOP Reps. Roy, Andy Biggs of Arizona and Marjorie Taylor Greene of Georgia, who also appeared on the floor without masks, could be fined as well.

Members can appeal the fines to the ethics committee, and receive $2500 fines for subsequent offenses.