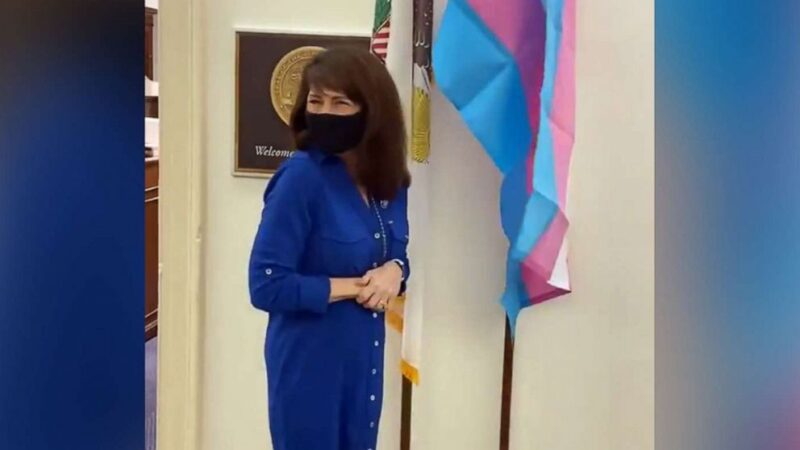 (WASHINGTON) — Illinois Rep. Marie Newman displayed a transgender pride flag outside her Capitol office in a dig against controversial Georgia Rep. Marjorie Taylor Greene, who made transphobic comments about her daughter.

The two lawmakers have clashed over the Equality Act, a bill that the House of Representatives will vote on Thursday that seeks to ban discrimination against the LGBTQ community.

Newman, a Democrat, choked on tears as she spoke on the House floor on Tuesday, saying the bill would offer protections for transgender people, including her daughter Evie.

“My own daughter, who years ago bravely came out to her parents as transgender. I knew from that day on my daughter would be living in a nation, where in most of its states, she would be discriminated against merely because who she is,” Newman said. “And yet it was the happiest day of my life and my daughter has found her authentic self.”

On Wednesday Greene, a Republican and staunch supporter of former President Donald Trump, tried to block the bill’s movement through the chamber claiming it would force her daughter to compete in sports and share locker rooms with “biological” men.

On Twitter, Greene, who is known to espouse debunked conspiracy theories and who has in the past supported QAnon, said: “As mothers, we all love and support our children. But your biological son does NOT belong in my daughters’ bathrooms, locker rooms and sports teams.”

The bill would amend the Civil Rights Act of 1964 to prohibit discrimination based on sexual orientation and gender identity, in addition to the existing categories of race, color, religion, sex or national origin.

The House passed the Equality Act in 2019, and is sending the bill back to the Senate in this new session of Congress in the hopes that the Democrat-controlled chamber can pass the measure, too.

Supporters of the measure say it would end discrimination in housing, education and employment and prevent people who identify as LGBTQ from being denied a locker room or restroom. While some Republicans supported the bill in the House last year, many Republicans claim the measure would threaten religious freedoms and women’s rights.

Following Greene’s comments, Newman put up the blue and pink transgender pride flag outside her office, located directly across the hall from Greene’s.

She claimed Greene “tried to block the Equality Act because she believes prohibiting discrimination against trans Americans is ‘disgusting, immoral, and evil."”

Greene fired back by putting up her own sign that said: “There are TWO genders: Male and Female “Trust the Science!”

Thursday morning, Newman said Facebook took down her video as “hate speech” but allowed Greene’s to remain up. Facebook soon after replied to Newman in a tweet saying the removal was a mistake and her video was restored.

“It was never meant to be a fight. It was a statement I felt was very necessary … I felt as though she needed to hear from us. I just wanted to make a statement so she sees LGBTQ people,” Newman said on CNN.

On Thursday, as she did the day before, Greene forced another floor vote on a motion to adjourn the House to stall the vote on the Equality Act. The motion was voted down, but halted business by an hour.

Greene’s comments drew public scorn from fellow members of Congress, who denounced her actions as transphobic.

Washington Rep. Pramila Jayapal defended Newman, saying, “From the mom of one trans kid to another, we will pass the #EqualityAct —for Evie, for Janak, for thousands more to be able to fully be who they are.”

Republican Illinois Rep. Adam Kinzinger, said, “This video and tweet represents the hate and fame driven politics of self-promotion at all evil costs. This garbage must end.”

Kinzinger was one of 11 Republicans who voted to strip Greene of her committee assignments earlier this month.

In a press conference Thursday, House Speaker Nancy Pelosi called Greene’s actions a “sad event … demonstrating the need for us to have respect” for the LGBTQ community.