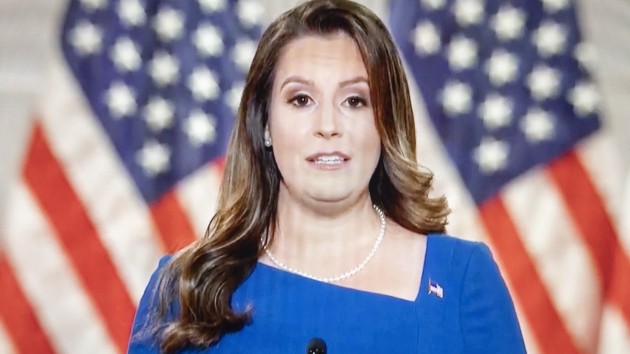 (WASHINGTON) — In 2016, Rep. Elise Stefanik, R-N.Y., was one of a handful of prominent Republicans to skip the GOP convention in Ohio and later refused to mention former President Donald Trump’s name when asked if she would vote for him.

Four years later, after becoming one of his staunchest defenders, Stefanik delivered a keynote speech at the Republican National Convention, calling Trump “the only candidate who is capable of protecting the American dream,” and voted to challenge the results of the election in two states on Jan. 6.

Now, she’s on the verge of joining Republican leadership, as a growing number of lawmakers call for Rep. Liz Cheney, R-Wyo., to be replaced as the No. 3 House Republican amid her repeated criticisms of Trump for falsely claiming the 2020 election was stolen.

“My vision is to run with support from the president and his coalition of voters,” Stefanik, 36, said Thursday of Trump in an interview with former Trump adviser Steve Bannon.

While allies say Stefanik’s relationship with Trump and position in the party is reflective of support for Trump among GOP voters and her district, some former colleagues don’t recognize the New York Republican today.

“It’s hard to square the two,” said Barbara Comstock, a former Republican congresswoman from Virginia and an ABC News contributor. “Dealing for Trump was a challenge, and everyone had a different way of dealing with it.”

Stefanik’s office declined to make her available for an interview or respond to messages seeking comment on the record.

“She’s doing exactly what she is supposed to be doing as an elected official,” Carl Zeilman, the chairman of the Saratoga County Republican Committee, told ABC News. “She’s changed [with] the way the constituency wants her to represent the district.”

After graduating from Harvard University in 2006, Stefanik, who volunteered for the state GOP party in high school, worked in former President George W. Bush’s White House, serving on the Domestic Policy Council and in the office of Josh Bolten, Bush’s then-chief of staff.

She soon set her sights on Congress after moving back to New York and working in her family’s lumber and plywood business.

Local Republicans and political observers recall Stefanik outworking her competition in the 2014 GOP primary for New York’s 21st Congressional District, one of the largest in the eastern United States that was carried by former President Barack Obama in 2008 and 2012.

“She made a point to come and meet with each chairman and introduce herself and what she was running for. She attended large meetings, small meetings, firehouse meetings, whatever it was she made sure to be here,” Fulton County GOP Chairman Susan McNeil told ABC News.

Pledging to bring fresh ideas and a new generation of leadership to Congress, Stefanik, with endorsements from Romney, Ryan and other GOP leaders, won her primary and easily defeated her Democratic opponent in November, becoming the youngest woman ever elected to Congress.

A moderate wary of Trump

Beginning her career on Capitol Hill as a moderate, Stefanik initially endorsed and voted for former Ohio Gov. John Kasich in the 2016 GOP presidential primary. She later backed Trump for president as the GOP nominee against Democrat Hillary Clinton.

But Stefanik, like Romney and other prominent establishment Republicans, skipped the party’s nominating convention in Cleveland that summer, with her office saying she would remain at home to focus on constituent work.

She criticized Trump after the release of the Access Hollywood tape in October 2016, but later confirmed she would support her party’s nominee for president, declining to mention Trump by name.

At the start of Trump’s term in office, Stefanik was a leader of the centrist GOP Tuesday Group caucus, voted against Republicans’ 2017 rewrite of the tax code and criticized Trump’s controversial ban on refugees from seven Muslim countries.

Like Cheney, she also criticized his posture toward Russia and NATO, and defended special counsel Robert Mueller’s investigation.

According to FiveThirtyEight’s “Trump Score,” which tracked how often Republicans voted for the former president’s agenda, Stefanik scored a 77.7%, roughly 15 points lower than Cheney’s 92.9%.

“There are areas where I disagree with the president, but if there are areas I agree with, then I am going to work with him,” she told the Post-Star newspaper of Glen Falls, New York.

Stefanik was among the Republicans who later stood on stage with Trump at Fort Drum — the large Army installation in her district and the home of the 10th Mountain Division — in August 2018 when he signed the annual defense policy bill into law.

“That was a pivot or fulcrum type moment,” Jeff Graham, the former mayor of Watertown and a longtime Stefanik supporter, told ABC News.

The next year, Stefanik emerged as one of Trump’s staunchest defenders as a member of the House Intelligence Committee, working closely with conservative Trump allies such as Rep. Jim Jordan, R-Ohio, to rebuff Democrats’ impeachment investigation into whether the president improperly withheld foreign aid to Ukraine.

Stefanik later served as a top surrogate for Trump and spoke in prime time on the third night of the Republican National Convention in Washington in the summer of 2020.

“This district was considered for a long time a moderate district, filled with Rockefeller Republicans, but that seems to have changed,” former Rep. Bill Owens, a Democrat who retired in 2015 after representing the area, told ABC News. “It’s clearly moved far to the right, and she’s followed that trend.”

Stefanik has used her new platform and profile in Republican circles to help support and recruit GOP women to run for Congress — an effort that grew out of frustrations following the party’s 2018 midterm losses.

With her political action committee, E-PAC, Stefanik raised millions of dollars for GOP candidates in 2020 and supported the record number of GOP women elected to Congress last year.

Stefanik was among the 147 Republicans who voted to overturn the election results in Arizona and Pennsylvania on Jan. 6, after a mob of pro-Trump protestors stormed the Capitol in a clash that left several people dead — and defended questioning the results in two other states in a floor speech after the riot.

On Thursday, one day after Cheney wrote a Washington Post op-ed calling for Republicans to reject Trump’s “cult of personality,” Stefanik told Bannon she fully supported the controversial Republican-backed audit of election results in Arizona, which election experts have worried will further undermine confidence in the electoral process.

But she also said she would work on “sending a clear message that we are one team, and that means working with the president and working with all of our excellent Republican members of Congress.”

House Republicans can vote to remove Cheney from their leadership team as early as next week and install Stefanik in her place in a subsequent vote.

While some conservative groups have questioned Stefanik’s voting record, a broad swath of the GOP conference — a mix of freshmen and veteran lawmakers, as well as centrists and some conservatives — has publicly endorsed her to succeed Cheney in the No. 3 leadership position.

More importantly, she has the support of Trump, who called her a “smart and tough communicator” in a statement on Wednesday.

Stefanik “is an ambitious politician who sees her future in the Republican Party in one leadership role or another and has worked out that the potential for the party to move in a more moderate direction is not there — and given that, has thrown in with [Trump],” Tim Weaver, a political science professor at the State University of New York at Albany, told ABC News.

Assuming Stefanik can keep her seat through the upcoming redistricting cycle in New York — controlled by Democrats in Albany — her rise to House leadership with Trump’s support could put her “in a prime position” for a leading role in the party, he added.

Graham, the former Watertown mayor, praised Stefanik’s rise in Washington and her representation of upstate New York — and said her relationship with Trump was reflective of her constituents and many GOP voters.

“Nobody quite knew where the whole Trump thing was going to go,” Graham said. “She was cautious. As they say in politics, she evolved.”