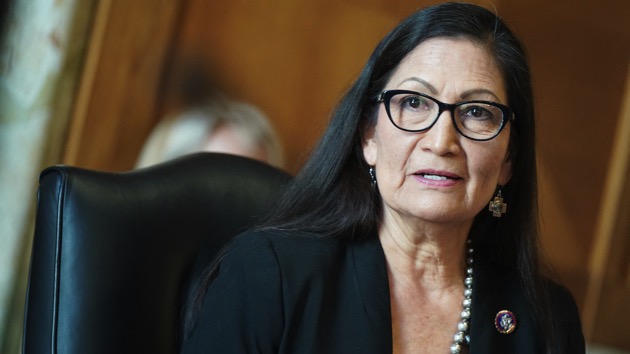 (WASHINGTON) — The Senate is expected to confirm Rep. Deb Haaland as interior secretary Monday in a historic vote that will make her the first Native American to serve as in a president’s Cabinet.

Haaland, elected to the House of Representatives in 2018, has earned the support of several key Republican senators despite early GOP opposition to her nomination, and is expected to sail to confirmation.

This won’t be the first time Haaland has made history. She was also one of the first two female Native Americans in Congress. Haaland worked in New Mexico state politics before seeking federal office and is an enrolled member of the Pueblo of Laguna tribe.

Haaland was seen as a vulnerable nominee early in her confirmation process. Republicans rejected her because of comments she made opposing fossil fuels and supporting the Green New Deal.

The top Republicans on the Senate Energy Committee, John Barrasso, who represents Wyoming, opposed Haaland from the start, attempting to brand her as a “radical selection” and suggesting, during a committee meeting to vote on her nomination earlier this month, that Haaland would support policies that will take a “sledgehammer” to Western jobs.

Haaland has opposed pipeline projects, like the Keystone XL pipeline, and was an original sponsor of the House’s Green New Deal.

During the 2016 protests of the Dakota Access pipeline, Haaland camped with the Standing Rock Sioux in opposition to the pipeline.

Haaland faces a confirmation vote as the Biden administration looks to set an early record of combatting climate change.

In the earliest days of his administration, Biden issued executive orders that revoked permits for the Keystone Access Pipeline, places a temporary moratorium on oil and gas activity in the Arctic National Wildlife Refuge, and aims for other sweeping energy reform. Republicans have tried to paint Haaland as a guarantee that the administration will continue enacting policies that threaten jobs in fossil fuel, gas and coal.

“This vote is to represent those families in Louisiana being ignored by this president, whose jobs are being sacrificed for a political agenda,” Sen. Bill Cassidy, R-La., said in a statement after voting against Haaland in committee. “The Biden administration’s energy policies are not guided by science or logic. They will push production overseas to countries with worse environmental standards and ultimately increase global emissions.”

But during her confirmation hearing, Haaland looked to assuage concerns from Republicans by recognizing the role that fossil fuels play in the American economy. She promised to work with more conservative members.

“As I’ve learned in this role, there’s no question that fossil energy does and will continue to play a major role in America for years to come. I know how important oil and gas revenues are to fund critical services,” she said in her opening statement. “But we must also recognize that the energy industry is innovating, and our climate challenge must be addressed. Together we can work to position our nation and all of its people for success in the future, and I am committed to working cooperatively with all stakeholders, and all of Congress, to strike the right balance going forward.”

Haaland focused particularly on concerns from moderate Republican Sen. Lisa Murkowski of Alaska, promising to listen to the senator who voiced concerns about the impact of Biden’s early executive orders on Alaska.

“I know that President Biden doesn’t want to cripple any state,” Haaland told Murkowski during her confirmation hearing. “I do want to work with you. I do want to make sure that I understand the unique issues in Alaska and to make sure that we are doing all we can to ensure that your constituents have the opportunities that they need.”

Murkowski ultimately decided to support Haaland’s nomination despite some “very real misgivings,” breaking with the other Republican members of the Senate Energy Committee.

“I have really struggled with this one how to reconcile a historic nomination with my concerns about the individuals and an administrations conception of what Alaska’s future should be,” Murkowski said earlier this month. “Representative Haaland if you’re listening know that I intend to work with you because I want you to be successful and quite honestly we need you to be successful, but I am also going to hold you to your commitments to ensure that Alaska is allowed to prosper. “

Haaland was backed by both Alaskan Senators in a test vote last week. Sen. Dan Sullivan, R-Ala., voted alongside Murkowski, and two other GOP Senators, Sens. Susan Collins, R-Maine, and Lindsey Graham, R-S.C., to move Haaland’s nomination to the floor.

“While we do not agree on every issue, she reaffirmed her strong commitment to bipartisanship, addressing the diverse needs of our country and maintaining our nation’s energy independence,” Manchin said. “In addition, she reiterated the position of the Biden Administration that our country will continue to use fossil fuels for years to come, even as we transition to a cleaner energy future, through innovation not elimination.”

“Given the long and troubled relationship between the federal government and tribal nations, the ascension of Rep. Haaland to the top of the Interior Department is a profoundly important moment for America as we advance on the long road — still not fully traveled at all — of equality, or towards equality,” Schumer said. For too long, tribal nations have been denied a seat at the table where decisions were made that impacted their lives and their land. Not only will a Secretary Haaland ensure that they get a seat, she will bring her own lived experiences to the table alongside them.”