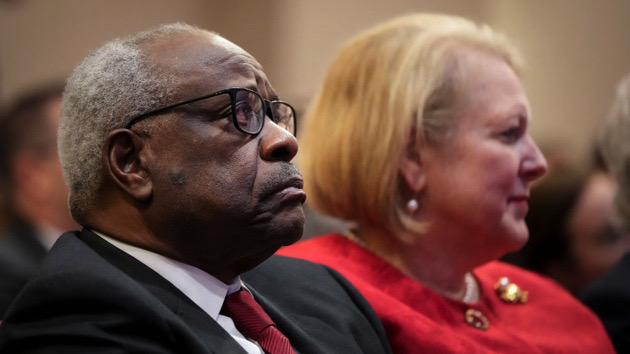 (WASHINGTON) — Rep. Alexandria Ocasio-Cortez has called on Supreme Court Justice Clarence Thomas to resign from the nation’s highest court as a growing number of Democrats demand he recuse himself from some cases following revelations that his wife urged then-White House Chief of Staff Mark Meadows to help overturn the 2020 election results.

Ocasio-Cortez, D-N.Y., called on Democrats to explore impeachment if he doesn’t step down — noting that Thomas was the lone dissenting vote on the court earlier this year to block the Jan. 6 committee from obtaining Trump White House records.

“Clarence Thomas should resign. If not, his failure to disclose income from right-wing organizations, recuse himself from matters involving his wife, and his vote to block the Jan 6th commission from key information must be investigated and could serve as grounds for impeachment,” she wrote in a tweet Monday morning.

“Congress must understand that a failure to hold Clarence Thomas accountable sends a loud, dangerous signal to the full Court – Kavanaugh, Barrett, & the rest – that his acts are fair game,” she added. “This is a tipping point. Inaction is a decision to erode and further delegitimize SCOTUS.”

The call from Oscaio-Cortez comes on the heels of two dozen other congressional Democrats sending a letter to Supreme Court Chief Justice John Roberts and Justice Thomas on Monday evening requesting the justice recuse himself in all cases related to Jan. 6 and the 2020 election. The letter, spearheaded by Sen. Elizabeth Warren, D-Mass., and Rep. Pramila Jayapal, D-Wash., also asks Roberts to create a binding code of conduct for the Supreme Court by April 28, “that includes (1) enforceable provisions to ensure that the Justices comply with this Code and (2) a requirement that all Justices issue written recusal decisions.”

While it’s unlikely that Thomas would resign or Democrats would have enough support to impeach him, calls from Ocasio-Cortez and other high-profile Democrats could pressure more to pressure party leaders to take up the issue ahead of the midterms.

“I think Justice Thomas could make his decisions like he’s made…every other time. It’s his decision based upon law,” McCarthy said.

On Monday, the top Democrat on the Senate Judiciary Committee, Chair Dick Durbin, D-Ill., also called on Thomas to recuse himself from Jan. 6-related cases, telling reporters it would be “for the good of the court” and added that the committee might take action after Judge Ketanji Brown Jackson’s confirmation.

Sen. Amy Klobuchar, D-Minn., who also sits on the Senate Judiciary Committee, called the situation “a textbook case for” recusal in an interview with This Week co-anchor Jonathan Karl in an interview on Sunday.

Sources familiar with text messages sent from Virginia “Ginni” Thomas to Meadows, which were obtained by the House Select Committee investigating the Jan. 6 Capitol attack, confirmed their authenticity to ABC News. The content of the messages was first reported by The Washington Post and CBS News.

“Help This Great President stand firm, Mark!!!” Thomas wrote to Meadows on Nov. 10 after the election was officially called for Joe Biden. “You are the leader, with him, who is standing for America’s constitutional governance at the precipice. The majority knows Biden and the Left is attempting the greatest Heist of our History.”

“Evil always looks like the victor until the King of Kings triumphs,” Meadows wrote. “Do not grow weary in well doing. The fight continues. I have staked my career on it. Well at least my time in DC on it.”