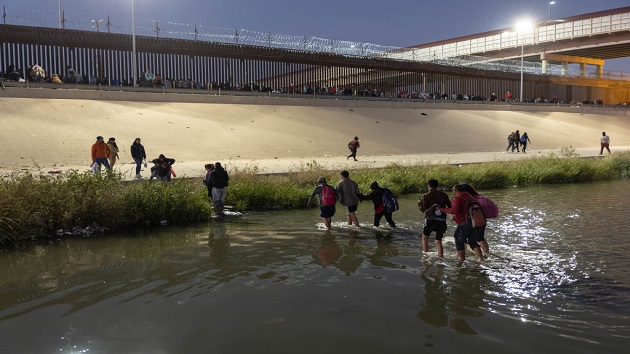 (NEW YORK) — There were 233,740 migrants apprehended along the U.S. southern border in November, according to U.S. Customs and Border Protection- a 1% increase from October’s record – breaking apprehensions and marked the highest ever number of border crossings ever recorded for the month of November.

Title 42, the Trump era policy which expelled migrants under the auspices of the pandemic, is halted until the Supreme Court hears arguments on the case.

The timing of the release of the November border numbers, on the Friday before Christmas, irked some Republicans who have been critical of the way the Biden administration has handled the issue of immigration.

“November had the most illegal border crossings ever for the month with 233,740 known crossings — enough to fill SoFi Stadium more than twice over,” Rep. Young Kim (R-CA) tweeted. “This is only getting worse. I urge VP Harris & President Biden to visit the border firsthand so we can work in earnest on solutions.”

CBP touts the Venezuelan asylum program as working – going from nearly 1,100 Venezuelans a day to 100 at the southwest border.

Announced in October, the Department of Homeland Security said Venezuelans presenting themselves at the southern border would be returned to Mexico. They also said Venezuelans will need a sponsor in the United States to enter the country legally. That can be done online, a senior administration official told reporters on a conference call at the time of the announcement.

Fentanyl and heroin seizures, according to the data, both increased more than 50% according to CBP from the previous month.