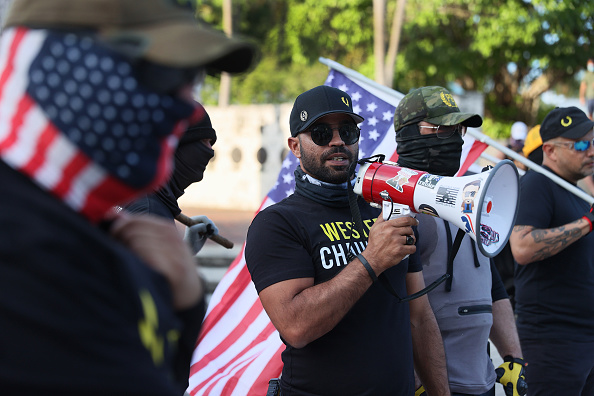 (WASHINGTON) — The former leader of the far-right Proud Boys group and four associates go on trial this week, with jury selection beginning Monday, as they face allegations of conspiracy to disrupt the certification of President Joe Biden’s 2020 election victory, among other charges related to the Jan. 6 riots at the U.S. Capitol.

Pezzola faces an additional charge of felony robbery, because prosecutors allege he stole a riot shield from U.S. Capitol Police.

All five men have pleaded not guilty and their attorneys have argued some of their conduct was constitutionally protected speech.

Tarrio was not at the Capitol on Jan. 6. Earlier this year, his lawyer criticized “weak” evidence in the case and he said he didn’t agree with the rioting.

The case is a major test for the Justice Department as it continues to prosecute rioters at the Capitol on Jan. 6, 2021, and those who authorities say had a hand in organizing what ultimately became a violent uprising to try and stop then-President Donald Trump from leaving office.

Jurors, however, returned a mixed verdict in that trial, with three other defendants being found not guilty of seditious conspiracy.

“Breaking the law in an attempt to undermine the functioning of American democracy will not be tolerated,” FBI Director Christopher Wray said in a statement, in part, after Rhodes and Meggs were convicted. “The FBI will always uphold the rights of all citizens who peacefully engage in First Amendment protected activities, but we and our partners will continue to hold accountable those who engaged in illegal acts regarding the January 6, 2021, siege on the U.S. Capitol.”

As national chairman of the Proud Boys, Tarrio frequently made speaking appearances at rallies and political events to promote the group’s extremist, far-right ideologies.

Members of the group are known to espouse white supremacist rhetoric. Tarrio himself has disavowed racism and ethnic prejudice.

“No Trump … No Peace,” Tarrio said in one November 2020 social media post, according to prosecutors.

The government alleges that his Proud Boy members reciprocated with violent calls to action in the weeks following the 2020 election and that these statements were the building blocks of their Jan. 6 conspiracy.

“It’s time for f—— War if they steal this s—,” Biggs wrote in an online post, according to the indictment.

Another Proud Boys member, Jeremy Bertino, pleaded guilty in October to seditious conspiracy and agreed to cooperate with prosecutors.