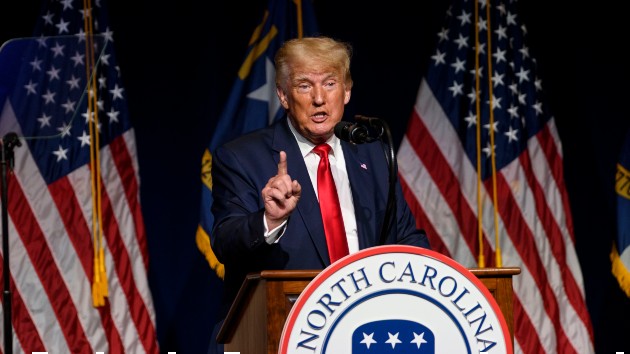 (WASHINGTON) — For the GOP incumbents who broke with their party earlier this year by casting votes to impeach or convict Donald Trump for inciting the Jan. 6 insurrection, the former president looms large over their 2022 reelection campaigns, inspiring a slew of primary challengers determined to oust the Republicans who turned on the president.

“My biggest motivation was David Valadao’s vote to impeach President Trump. … He’s consistently worked against [Trump] as a Republican against a Republican president. It doesn’t get any worse than that,” said Chris Mathys, the only Republican challenger in California’s pro-Biden 21st Congressional District.

Eleven of the 17 Republicans who supported Trump’s second impeachment — the 10 representatives and one senator — face voters again in 2022, and 10 of them are facing challengers from within their own party.

“This impeachment vote, to me, was simply the last straw in what has been a political career full of choices abandoning his duty to protect our Constitution and the people’s individual liberties,” said Jonah Schulz, who is challenging Ohio Rep. Anthony Gonzalez despite Trump throwing his weight behind a different candidate.

Candidates don’t file to get on the ballot with their state’s department overseeing elections until an election year, but across the 11 races, 40 Republicans have filed candidacies with the Federal Election Commission, a requirement to raise and spend campaign cash.

To put that figure into perspective, in 2020, eight of the 10 Republicans ran as incumbents. Across those eight districts, only four non-incumbent Republicans were on the primary ballots.

While not all of these campaigns will materialize — some candidates don’t even have a website or have raised little to no money — several candidates are waging serious campaigns, and the kingmaker, Trump, has been sparing with his endorsements so far.

Incumbents rarely lose primaries. In the post-World War II era, 98% of House members who sought reelection won their party’s nomination, according to an analysis by Sabato’s Crystal Ball. But Trump is a chronic disrupter of norms, and when it comes to the Republicans who defied him, he wants to “get rid of them all,” as he said at this year’s Conservative Political Action Conference.

If he makes his preferred candidate known, these primary races will test how firm the former president’s grip still is on the GOP.

“When the former president, who is the most popular person in the Republican Party, is … getting involved in some of these challenger races, that’s not generally the case when you see challengers to incumbents,” said Taylor Budowich, a senior adviser to Ohio congressional candidate Max Miller.

Miller is one of two challengers Trump has already endorsed, and the former president is holding a rally outside Cleveland Saturday night to support him. A former White House staffer and veteran of the former president’s campaigns, Miller is running against Gonzalez in Ohio’s 16th Congressional District. Trump’s endorsement — received on the day he announced his campaign — is prominently displayed on Miller’s website.

Liz Cheney, the former House Republican Conference chair who was voted out of leadership for continuing to refute Trump’s false claims about a stolen election, is the lone House member representing the most pro-Trump state, Wyoming. While Trump has not endorsed in her race yet, Cheney is one of his most frequent targets.

Two others are Rep. Adam Kinzinger of Illinois and Sen. Lisa Murkowski of Alaska.

“It’s not fair to his constituency and the people who elected him,” Lauf said. “This is exactly how you hold them accountable — by primarying them.”

Lauf, who was featured on the first night of the 2020 Republican National Convention, said she didn’t identify with the Republican Party until Trump. He’s yet to endorse in the race, but Lauf is confident he’ll back her.

In Alaska, Trump gave Republican Kelly Tshibaka his “Complete and Total Endorsement” in a statement last week, saying she’s “the candidate who can beat Murkowski — and she will.”

Not only does she have his endorsement, but Trump’s 2020 campaign communications director, Tim Murtaugh, is a senior adviser to her campaign.

“The endorsement of Donald Trump is more highly coveted than any other endorsement that has ever existed,” Murtaugh told ABC News, just two days before Tshibaka scored Trump’s support.

Trump has promised to campaign against Murkowski on her home turf. But Alaska’s politics and Murkowski’s electoral history suggest she may be hard to beat. Not only was her father a longtime senator and governor, but in 2010, Murkowski lost the Republican primary — only to later become the first senator in half a century to forge a successful write-in campaign. Another potential challenge: Alaska’s recent election overhaul. In 2022, all candidates will compete on the same primary ballot and the top four vote-getters, regardless of party, will advance to the general election.

The one pro-impeachment Republican who has yet to get a primary challenger is John Katko, who represents New York’s 24th Congressional District. After Valadao’s district in California, where Mathys is running, Katko represents the second-most pro-Biden district among the 10 pro-impeachment House Republicans.

Trump is reportedly hunting for the right challenger to take on Katko. According to Syracuse.com, Trump sent a handwritten letter to two county Conservative Party chairmen, calling Katko “bad news” and saying he would “help with campaign — find a great candidate.”