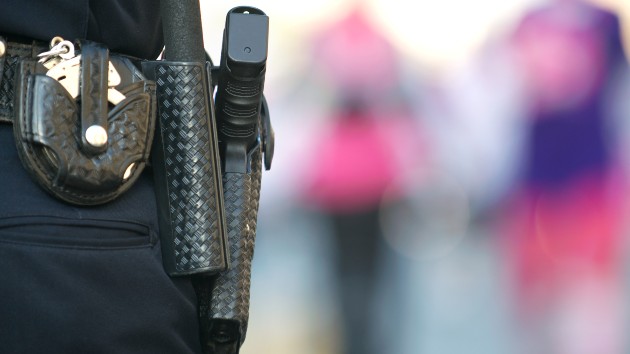 (WASHINGTON) — One day after President Joe Biden called for Congress to deliver compromise legislation on policing reform to his desk by May 25 — the anniversary of George Floyd’s death — the families of victims of police violence, including Floyd’s brother Philonise Floyd, met with key lawmakers on Capitol Hill and went to the White House to talk about moving legislation forward.

Amid palpable, bipartisan energy and desire on the Hill to produce results, they met with a group of lawmakers on Thursday, including key Republicans Sens. Tim Scott, R-S.C., and Lindsey Graham, R-S.C. and lead Democratic negotiators, Sen. Cory Booker, D-N.J., and Rep. Karen Bass, D-Calif.

Philonise Floyd told reporters Thursday the families were there to tell lawmakers they are “still in pain.”

The families emerged from the meetings with their attorney, Ben Crump, who told reporters the sessions were an opportunity for the aggrieved families to push for “meaningful reform” and that any legislation will bear the blood stains of their loved ones.

Dr. Tiffany Crutcher, the sister of Terence Crutcher, who was fatally shot by police in Tulsa, Oklahoma, in 2016, said even though she cannot bring her brother back, she and the other families “can make sure that no one else has the same fate.”

“I came to Capitol Hill a year before George Floyd was killed fighting for this same thing,” Crutcher said. “And here we are again, you know, a year later, two years later, and I believe we have a huge opportunity to push this across the finish line.”

House Democrats, led by Bass and Jackson, last year passed the George Floyd Justice in Policing Act of 2021, which would establish a national standard for the operation of police departments, mandate data collection on police encounters, streamline federal law to prosecute excessive force and ban chokeholds and no-knock warrants. It passed the House in March on a party-line vote of 220-212.

But Democrats in the Senate blocked a competing measure in June by Scott that they said did not go far enough. That bill, the Justice Act, focused on using federal dollars to incentivize police departments to drop controversial practices, like the carotid chokehold that was used on Floyd, employing more body cameras, making lynching a federal hate crime, increasing training particularly in deescalation tactics and establishing a commission to study the use of no-knock warrants in drug cases — a move that could, Scott said at the time, eventually lead to an outright ban.

Now, those same lawmakers have been drawn together by new momentum in the wake of the Derek Chauvin trial where that officer was found guilty of murdering George Floyd using a carotid chokehold, or knee to the neck.

But many of the same disagreements remain, despite the bipartisan spirit to find common ground.

One major sticking point in the bill is whether or not to strip or modify the legal immunity protections police are afforded called “qualified immunity.” Some, like Scott and Graham, have suggested a possible compromise wherein a police department, rather than an individual officer, would be held accountable, though a number of progressives and activists find that unacceptable.

Another sticking point concerns the criminal intent standard for prosecuting a law enforcement officer. Instead of showing a specific intent to willfully deprive someone of their constitutional rights, activists and many Democrats want to lower that threshold to “reckless disregard.”

One attorney for the families, Bakari Sellers, told reporters that the group is insisting on seeing the threshold for criminal intent lowered and civil protections stripped from police officers.

And those are just some of the points of contention during negotiations.

Graham said Thursday that he sees a “sweet spot” for negotiations, particularly around qualified immunity, though it’s unclear what that would be.

But on Thursday afternoon, with a sense of momentum in the air on Capitol Hill, an expanded bipartisan group of lawmakers sat down for the first time this year on the issue.

The group emerged after an hour behind closed doors saying they were buoyed by the positive energy and determined to keep at the negotiations, but the path forward is unclear.

“There is a positive spirit in the room, we still have a number of major issues to work on,” Durbin told ABC News.

Biden called on Congress to compromise to get legislation on his desk during his joint address Wednesday night.

“I know Republicans have their own ideas, and are engaged in a very productive discussion with Democrats in the Senate,” Biden said. “We need to work together to find a consensus, but let’s get it done next month by the first anniversary of George Floyd’s death.”

When asked if they could meet Biden’s May 25 deadline, Durbin demurred, but Graham interjected, “We’re going to try.”

Booker told reporters Thursday he is not thinking about the president’s deadline, but is “thinking about getting this done as quickly as I possibly can.”

House Speaker Nancy Pelosi was optimistic about the negotiations but said Thursday lawmakers “will bring it to the floor when we are ready.”

“I think every time we meet, we have more information that allows us to work toward a result that’s positive,” Scott said, though he, too refused to commit to a deadline adding, “Nothing happened in the meeting that deters me from being optimistic that we can get there.”

Still, when asked if he remains opposed to lowering the criminal intent threshold for officers, Scott said emphatically, “That’s my position.”

“What the family members who spoke to me want is progress that they can measure in a meaningful way. We are going to continue to work on what that looks like. And I’m glad that they were willing to stay engaged. It is informative and educational, and that’s good news,” Scott said.

Other family members who attended Thursday’s meeting were Gwen Carr, the mother of Eric Garner, who died in 2014 after being put in a police chokehold on Staten Island, New York, and Allisa Findley Jean, the sister of Botham Jean, who was shot by an off-duty officer in his Dallas, Texas, apartment in 2018.