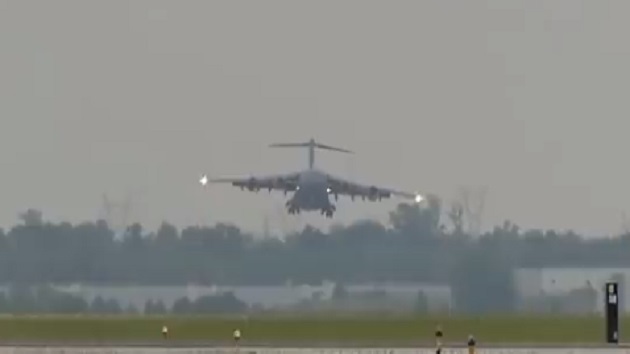 (NEW YORK) — The first batch of imported baby formula under “Operation Fly Formula” arrived in the United States on Sunday as the Biden administration tries to alleviate the nationwide baby formula shortage.

Military aircraft transported the shipment of three formula brands, the equivalent of up to half a million 8-ounce bottles, from Ramstein Air Base in Germany to Indiana. The shipment included Nestlé Health Science Alfamino Infant and Alfamino Junior as well as Gerber Good Start Extensive HA, all of which are hypoallergenic formulas for children with cow’s milk protein allergies.

The Department of Agriculture said Saturday that “additional flights will be announced in the coming days.”

“Typically, the process to transport this product from Europe to U.S. would take two weeks. Thanks to Operation Fly Formula, we cut that down to approximately three days,” White House press secretary Karine Jean-Pierre said.

This shipment is the first of multiple planes of imported formula expected to arrive in the U.S. in the coming weeks.

“Folks, I’m excited to tell you that the first flight from Operation Fly Formula is loaded up with more than 70,000 pounds of infant formula and about to land in Indiana. Our team is working around the clock to get safe formula to everyone who needs it,” President Joe Biden tweeted Sunday ahead of the plane’s arrival.

The Access to Baby Formula Act of 2022 ensures families can use benefits from the Special Supplemental Nutrition Program for Women, Infants, and Children — also known as WIC — to buy formula products outside what is normally designated for the program during times of crisis.

The program purchases about half of all infant formula supply in the U.S., with some 1.2 million infants receiving formula through WIC.

Typically, each state relies on a contract with a single manufacturer to supply products for WIC participants. But a recall from Abbott, one of the nation’s largest manufacturers, highlighted flaws within the federal nutrition program.

“When we became aware of all of this we came together very quickly to do what we could,” Sen. Debbie Stabenow, D-Mich., said in remarks from the floor after the legislation passed, though she said she wished it would’ve never gotten to this point for families.

“The reality is that half of the baby formula in this country goes to moms and babies that are on a very important program that is called the Women, Infants, and Children’s program,” Stabenow continued. “We know that we’ve got to do anything humanly possible to take away any barrier available for them to get this important food for children.”

Now, the United States Department of Agriculture will have authority to amend WIC program rules during a shortage, recall or other emergencies and allow families to buy whatever products are available in the store.

The law also requires formula manufacturers that provide products for WIC participants to have a contingency plan for responding to shortages or recalls in the future.

Biden signed the baby formula bill into law during his five-day trip to Asia, according to the White House. He also signed a $40 billion aid package to Ukraine as Russia’s invasion stretches into its fourth month.

The Access to Baby Formula Act of 2022 had overwhelming bipartisan support in Congress, passing the House in a 414-to-9 vote and the Senate via unanimous consent.

“It’s rare that we have unanimity in the Senate on important measures, and I wish we had more, but this is one of these important issues and I’m glad we’re acting with one voice,” said Schumer, calling the shortage “stuff of nightmares” for parents.

The House also tried to give $28 million in emergency assistance to the Food and Drug Administration to enhance safety inspections and prevent fraudulent products from getting into stores. But the bill failed to move forward in the Senate, as Republicans on Capitol Hill remain opposed to giving the agency more funds.

FDA chief Robert Califf was grilled by lawmakers this week on the agency’s response to the formula shortage. He said it will the situation is “gradually” getting better, but that it “will be a few weeks before we’re back to normal.”