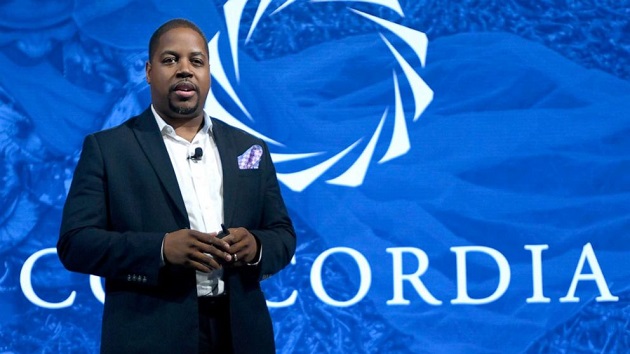 (NEW YORK) — A physicist launched his Democratic campaign for governor of Arkansas last week with a video that has gone viral.

Jones’ campaign announcement video has been retweeted over 10,000 times and has over 30,000 likes on Twitter as of Friday morning.

Dr. Chris Jones, who is also an ordained minister, announced his campaign last week with a cinematic video where he holds a graduation stole emblazoned with the numbers of various years, starting at 1819.

“Imagine that this stole represents time; not just my lifetime, but my ancestors and my children,” he says in the clip. “As a Christian, I thank God every day for that time. As a physicist, I also know that time is also relative. And with the right amount of energy, you can bend it and be anywhere.”

My family has been in this state for 7 generations. If there’s one thing that’s clear: Arkansas deserves better than division and discord.

After he bends the stole to juxtapose 1819 and 2022–when the election will occur–he goes on to speak about his generations-long family history in Arkansas, and his own background.

That includes how he earned a NASA-sponsored scholarship to attend Morehouse College, before going to MIT for his Ph.D. in urban planning and to study nuclear engineering. Afterward, he led the Arkansas Regional Innovation Hub, a center run by economic development nonprofit Winrock International.

In an interview with ABC News, Jones said that as governor he would plan on focusing on improving the state’s infrastructure, mentioning the recent crack found in a bridge on Arkansas’ Interstate 40, as well as access to rural broadband and economic development. But he is also hearing out what Arkansans want.

“One of the things about me … is that I can’t hear out of my right ear,” he said, echoing a detail he shared in the video. “As a part of that, I’ve had to lean into listening, so it actually builds up not only my physical muscles of listening in my left ear, but also the psychological muscle, understanding the importance of listening.”

Jones is facing three other Democratic challengers for governor, all of whom hope to flip the state blue as current Republican Gov. Asa Hutchinson nears his term limits. The other Democrats running, according to ABC News affiliate KATV, are Anthony Bland, a Baptist minister; Supha Xayprasith-Mays, a businesswoman; and James Russell, a business owner.

If elected, Jones or Bland would be Arkansas’ first Black governor. Xayprasith-Mays would be the state’s first woman to govern.

But any Democratic candidate faces a tough race in Arkansas, where 62% of voters voted for former President Donald Trump, a Republican, in the 2020 presidential election.

“If any outsider candidate were going to upend the current environment in Arkansas politics, it would appear to be Dr. Jones,” University of Arkansas professor Janine Parry told ABC News. Parry directs the university’s Arkansas Poll project.

While she has no polling data yet on Jones, she said that he is running as a Democrat in a state where there seems to currently be a “cap” on Democratic votes, with only around a third of voters choosing Democrats in recent elections. The state was a Democratic stronghold until around 2010, she said.

“To no one’s surprise,” Parry said, “her approval ratings [in Arkansas], which I have tested, are almost identical to President Trump’s,” above 50%.

But Jones is under no illusions about the challenge.

“It’s clear this is going to be a tough road ahead,” he said. But he believes that “Arkansans have a way of doing the hard stuff through grit and pushing through … and I think you don’t go from Arkansas to NASA if you’re afraid of hard work.”