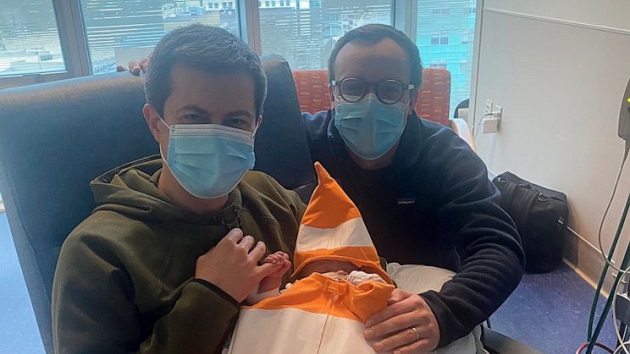 (WASHINGTON) — Pete and Chasten Buttigieg tweeted about their son’s return home after a three-week hospitalization Saturday, including a week on a ventilator.

“Thankful, relieved, and reflecting a great deal on the mixture of joy, terror, and love that is parenting,” Pete Buttigieg, U.S. Secretary of Transportation, said in a tweet responding to his husband.

Chasten Buttigieg first tweeted about his son’s hospitalization on Halloween saying, “Gus has been having a rough go of it but we’re headed in the right direction.” The transportation secretary retweeted the message.

The baby also traveled 125 miles in an ambulance, but the family is grateful for the medical professionals’ care, according to Chasten Buttigieg’s Twitter post.

“We’re so relieved, thankful, and excited for him and Penelope to take DC by storm! Thank you so much for all of the love and prayers,” tweeted Chasten Buttigieg.

The infant, Joseph “Gus” August Buttigieg, and his twin, Penelope Rose, were adopted by the political couple earlier this year, and Pete Buttigieg previously said they were born prematurely.

“The work that we are doing is joyful, fulfilling, wonderful work. It’s important work. And it’s work that every American ought to be able to do when they welcome a new child into their family,” said Pete Buttigieg to Jake Tapper on CNN, responding to criticism that he was taking too much time off for paid family leave.

“The Secretary feels fortunate and grateful to be able to take time to focus on his responsibilities as a father, and believes all American parents deserve the same,” the spokesperson said via a statement in late October.

Chasten Buttigieg also tweeted his thanks for everyone who shared their stories of Gus in the neo-natal intensive care unit.

“Those were so comforting during such a scary time. Thank you for helping us feel less-alone amidst all of the anxiety and uncertainty,” tweeted Chasten Buttigieg.

One out of every ten infants were born prematurely in 2020, according to the Centers for Disease Control and Prevention. Complications related to preterm birth complications are the leading cause of death among children and were responsible for around 1 million deaths in 2015, according to the World Health Organization.