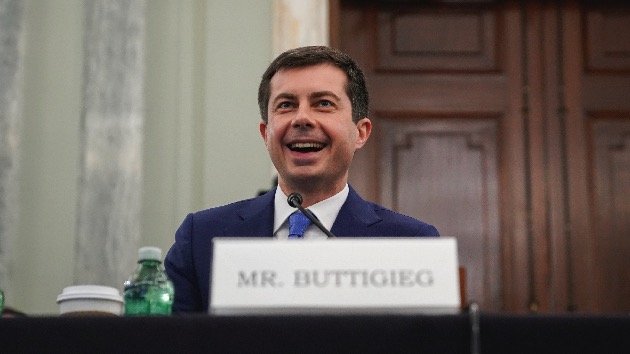 (WASHINGTON) — Former 2020 presidential candidate and South Bend, Indiana, Mayor Pete Buttigieg has made history as the first openly gay Cabinet member in U.S. history to be confirmed by the Senate.

At age 39, Buttigieg also represents another “first” as a millennial and the youngest person nominated to Biden’s Cabinet.

Arizona Sen. Kyrsten Sinema, the country’s first bisexual senator, was presiding over the Senate Tuesday and announced the 86-13 final vote.

As transportation secretary, Buttigieg has pledged to recognize how infrastructure has the power to bridge racial and economic disparities in America, as well as to keep in lockstep with Biden’s agenda of fighting climate change and address systems reeling from plummeting ridership amid the coronavirus pandemic.

He will assume a department with 55,000 employees and a budget of tens of billions of dollars.

Buttigieg tweeted shortly after the confirmation vote that he’s “honored and humbled” and “ready to get to work.”

I'm honored and humbled by today's vote in the Senate—and ready to get to work @USDOT.

In a speech from Wilmington, Delaware, Buttigieg reflected on what the moment means for all LGBTQ Americans when Biden announced his nomination late last year.

“I can remember watching the news — 17-years-old in Indiana, seeing a story about an appointee of President Clinton named to be an ambassador attacked and denied a vote in the Senate because he was gay — ultimately able to serve only by a recess appointment,” he said. “And I learned something about some of the limits that exist in this country when it comes to who is allowed to belong. But just as important, I saw how those limits could be challenged.”

Buttigieg was referring to the nomination of James Hormel to be ambassador to Luxembourg under then-President Bill Clinton in 1998. Senate Republicans held up the nomination in protest for two years until Clinton made the appointment himself, without confirmation, while the Senate was in recess. He connected the memory to his own confirmation hearing last month in an interview with ABC’s The View.

“As I was in that hearing taking those questions from senators, you could see my husband, Chasten, over my shoulder, and that is something that has never happened before for a Cabinet nominee,” Buttigieg said. “My hope is that, in turn, makes it easier for the next person to come along, so that this is never even viewed as a barrier by a future generation.”

During his hearing, some Republican senators pressed Buttigieg on the cost of Biden’s infrastructure plan, which redirects money for green initiatives, before he cleared the Senate Commerce Committee with a 21-3 vote last month.

Following his quick ascent during the 2020 primary, the rising star in the Democratic Party was the only formal rival Biden picked to join his administration after he announced Vice President Kamala Harris as his running mate in August.

Buttigieg endorsed Biden in March one day after ending his own presidential campaign, and both he and his husband, Chasten Buttigieg, took an active role during the general election, campaigning on Biden’s behalf.

“I don’t think I’ve ever done this before, but he reminds me of my son Beau. And I know to — that may not mean much to most people, but to me, it’s the highest compliment I can give any man or woman,” Biden said of Buttigieg last March.

LGBTQ rights organizations have praised Buttigieg’s nomination as a major step in ensuring the incoming administration reflects the country’s diversity.

The former mayor came out publicly in 2015 through an essay in the South Bend Tribune while seeking reelection. He was elected with 80% of the vote, more than he received during his previous election. He served in the role from 2012 to 2018.

Buttigieg is the fifth Cabinet level official of Biden’s to be confirmed by the Senate.