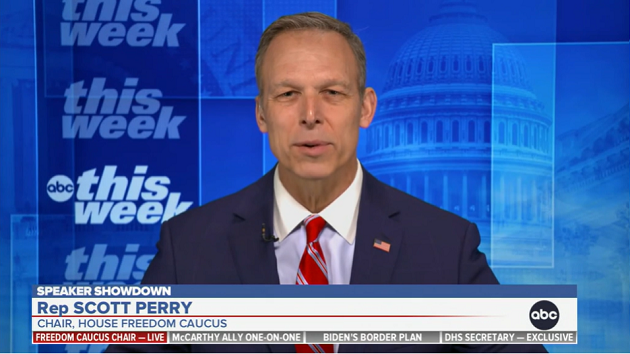 (WASHINGTON) — Rep. Scott Perry, R-Pa., would not commit on Sunday to recusing himself from a possible House GOP investigation of the Justice Department’s Jan. 6 investigation, even though federal investigators have looked at his role in the larger effort leading up to the insurrection and previously seized his cell phone.

“Why should I be limited? Why should anybody be limited just because someone has made an accusation? Everybody in America is innocent until proven otherwise,” Perry told ABC “This Week” anchor George Stephanopoulos.

“We’re gonna investigate, and we need to we need to make sure that that these agencies aren’t running amok and aren’t out of control, which clearly they are,” said Perry, the leader of the hard-right Freedom Caucus.

On Monday Republicans will vote to approve a package of rules governing the 118th House of Representatives that would establish a new panel to investigate what they call the “weaponization” of the federal government.

If approved, the rules package would give the special judiciary subcommittee broad authority to investigate how any part of the federal government gathers and analyzes information about Americans — including “ongoing criminal investigations.”

Democrats contend those provisions could be used to undermine sensitive law enforcement investigations, such as the one into former President Donald Trump and the Jan. 6 Capitol attack, in direct conflict with longstanding policy that the Justice Department does not share information with Congress related to ongoing criminal investigations.

The rules would also grant the special panel access to the same highly sensitive classified information provided only to the House Intelligence Committee.

Perry has said he believes election security was compromised in 2020 — despite no evidence of widespread fraud — and was in touch with like-minded allies of Trump in the run up to the insurrection. He’s said his phone was seized by the FBI in August but his attorney said the Department of Justice said he wasn’t a target of their investigation.

Perry sued to stop the DOJ from accessing the contents of his phone and separately refused a request for his records from the recently ended House Jan. 6 committee, but he met with the committee along with his attorney in November 2021 after being subpoenaed.

According to the Jan. 6 committee, Perry had played an “important role” in efforts to install former Justice Department official Jeffrey Clark — who pushed questionable claims of election fraud — as acting attorney general amid Trump’s push to overturn the 2020 presidential results.

On “This Week,” Stephanopoulos pressed Perry on whether his hypothetical service on a new House panel would serve as a conflict of interest given Jan. 6 investigators’ interest in him.

Perry did not answer directly but suggested he didn’t see a problem.

“Should everybody in Congress that disagrees with somebody be barred from doing the oversight and investigative powers that Congress has? That’s our charge. And again, that’s appropriate for every single member, regardless of what accusations are made,” he said. “I get accused of all kinds of things every single day, as does every member that serves in the public eye.”

Perry appeared on “This Week” one day after helping elect Kevin McCarthy as House speaker — a historically contentious vote that took 15 rounds and saw McCarthy make a number of concessions to critics like Perry in order to win their vote.

Those changes — such as ensuring single-subject bills, making it easier to remove a sitting speaker and a focus on lowering spending — are intended to decentralize power in the chamber to increase the public’s representation, Perry argued.

Stephanopoulos asked if McCarthy had conceded certain terms around the country’s debt limit, which will need to be raised later this year to cover spending that was already approved — or risk defaulting, which would upend financial systems.

Perry declined to say whether McCarthy had promised to tie a debt ceiling increase to a balanced budget. But he said that “the American people are sick and tired of this endless debt increasing.”

Stephanopoulos followed up, noting President Joe Biden has said he won’t negotiate on that front. He asked if Perry was prepared to allow the country to default over a push for spending cuts.

The protracted speakership battle in the House last week put a spotlight on the divisions in the Republican Party and raised questions about what McCarthy agreed to in order to win the gavel.

Appearing alongside Perry on “This Week,” McCarthy ally Rep. Andy Barr, R-Ky., told Stephanopoulos that he did not think McCarthy had shrunk his power, saying the rules changes would offer room for more debate.

“I understand the American people’s frustration with the delay in electing a speaker. Certainly, it’s going to be a challenge to have a conference full of independent thinkers with a thin majority,” Barr said. “But not only did the framers of our Constitution expect us to debate the operations of the House and the House rules and how we’re going to function, that’s what a healthy democracy actually requires.”

Barr said he felt the sometimes dramatic back-and-forth over speaker “was quite healthy from the standpoint of getting all of these issues resolved now, so that we can have a template going forward to come together as a conference.”

“We proved to ourselves, George, that we can, with perseverance and a lot of hard work and a never-give-up attitude, we can come together and unify to advance our agenda,” Barr said.

“I actually think this is going to strengthen us and not weaken us as a conference. It’s going to bring us together,” he said.