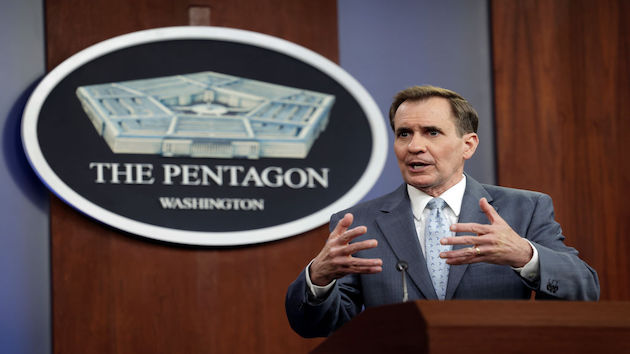 The White House announced “Operation Fly Formula” on Thursday as an effort to transport baby formula from abroad that meets U.S. health and safety standards. The first shipment — said to be the equivalent of up to 1.5 million 8-ounce bottles — will come from Nestlé S.A. in Zurich, Switzerland and arrive in Plainfield, Indiana.

“I don’t have a specific update for you in terms of exactly what carrier it’s going to be and exactly what time and date but obviously this isn’t classified information and as soon as we have it properly sourced and all the details worked out, we’ll get that to you,” Kirby said during a press briefing.

Kirby added he doesn’t think it’s “going to be very long” before the flight is actually in the air. “We’re talking days at most,” he said.

The mission will likely use chartered commercial aircraft arranged by U.S. Transportation Command, but military “gray tail” planes could also be used if it is deemed to be the most efficient solution.

Nestlé told ABC News the first shipment will include 132 pallets of Nestlé Health Science Alfamino Infant and Alfamino Junior, as well as 114 pallets of Gerber Good Start Extensive HA — all of which are hypoallergenic formulas for children with cow’s milk protein allergies, one of the most common food allergies in babies.

The administration has been under intense scrutiny for its response to the crisis, which had been building for months.

In another effort to diffuse the situation, President Joe Biden on Wednesday invoked the Defense Production Act to prioritize ingredients needed for formula production. The 1950 law — first used to build up arms supplies following North Korea’s invasion of South Korea — compels suppliers to provide needed raw materials to formula manufacturers ahead of other customers ordering those goods.

But administration officials on Thursday struggled to say exactly how the Defense Production Act will help in this scenario, sidestepping questions on what raw ingredients formula companies need that they’ve said they’re not able to get.

The out-of-stock percentages have worsened for formula products, according to the data racking firm Datasembly. For the week ending May 15, nearly 45% of products were unavailable in stores across the U.S.

Coronavirus-related supply chain issues plagued the industry but a recall and plant closure from Abbott — one of the nation’s top manufacturers — exacerbated the shortage.

Food and Drug Administration Commissioner Robert Califf was grilled by lawmakers during a hearing Thursday on the agency’s handling of Abbott. Inspection reports and a whistleblower document suggest the FDA became aware of potential problems at the Abbott plant last fall.

Califf told lawmakers the Abbott plant is on track to reopen within two weeks. Once the facility is reopened, the company has said it would take an additional six to eight weeks before product is back on the shelves.

“We know many parents and caregivers are feeling frustrated,” Califf said. “This crisis has shown us the impact of having a single manufacturer cease production for a brief period, and unless we strengthen the resilience of our supply chain, we could be one natural disaster or quality mishap or cyber attack from being here again.”