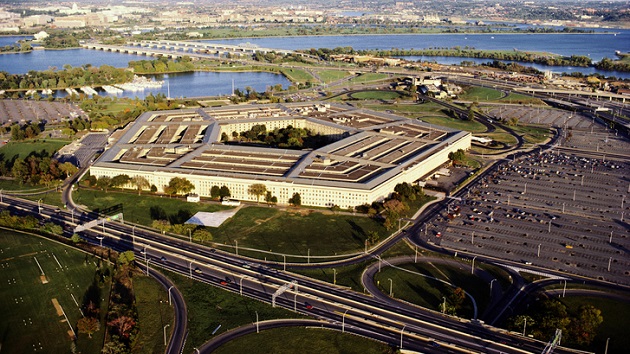 (WASHINGTON) — The Pentagon is seeing “small numbers” of Russian troops repositioning to the north of Kyiv but is not labeling it a withdrawal as Russia has characterized it. Instead, it believes the troops might be used in an offensive elsewhere in Ukraine, possibly into the Donbas region of eastern Ukraine.

After holding talks with Ukrainian negotiators in Turkey, Russia’s defense ministry said it was withdrawing forces from around Kyiv and Chernihiv as “a good faith” measure in the talks. However, the move coincided with the Russian military’s lack of success in its moves on the two northern cities.

“We’re seeing a small number now that appears to be moving away from Kyiv,” John Kirby, the Pentagon’s top spokesman, told reporters Tuesday. “This on the same day that the Russians say they’re withdrawing, but we’re not prepared to call this a retreat, or even a withdrawal. What they probably have in mind is a repositioning to prioritize elsewhere.”

“It’s certainly not a significant chunk of the multiple battalion tactical groups that Russia has arrayed against Kyiv,” Kirby said. “It’s not anywhere near a majority of what they have arrayed” around Ukraine’s capital.

He noted the Russians have said in recent days that it has made the Donbas area a priority.

“We believe that it is likely more repositioning to be used elsewhere in Ukraine. Where exactly we don’t know,” he said. “We all should be prepared to watch for a major offensive against other areas of Ukraine. It does not mean that the threat to Kyiv is over. “

“We’re not taking anything they say at face value,” Kirby said. “We’re not we’re not prepared to buy the Russian argument that it’s a withdrawal. Again, our assessment is that their intention is to reposition forces and bolster their efforts elsewhere.”

Though Kirby said Russian troops had repeatedly failed in their military objectives in Ukraine, particularly in taking Kyiv, he declined to characterize the Russian move as a defeat.

Earlier on Tuesday, Gen. Tod Wolters, the top U.S. military commander in Europe, told the Senate Armed Services Committee that Russia’s invasion was “a pivotal moment in Europe with generational implications” that had strengthened the NATO alliance.

Wolters said American troop levels in Europe had risen from 60,000 to 100,000 due to the invasion and said more troops might be needed.

“My suspicion is we’re going to still need more,” Wolters said. “And obviously, there’s always a mix between the requirement of permanent versus rotational and there are pluses and minuses of each one. We’ll have to continue to examine the European contributions to make a smart decision about where to go in the future.”

During his press conference Tuesday, Kirby announced some Marine forces that had recently participated in NATO’s Cold Response exercise in Norway would be redirected to Lithuania and Eastern Europe. The Marine units included a command and control unit being sent to Lithuania along with 10 FA-18 fighters and several C-130 transport planes.

Wolters praised Ukraine’s military and its ability to stall Russian military operations throughout the country, especially through the weapons systems being provided by the U.S. military.

“I think we can, and we will continue to maintain our support for the Ukrainian Armed Forces,” Wolters said. “… We’ve made dramatic improvements in our information and sharing and intelligence sharing.”

That support has included the key delivery of American-made Javelin anti-tank weapons and Stinger anti-aircraft missiles that have helped the Ukrainian military stall the progress of Russian troops throughout Ukraine.

Wolters said the supply line of weapons to the Ukrainians had been successful and had not come under attack. “They’ve been delivering right to the right location at the right time,” Wolters said.