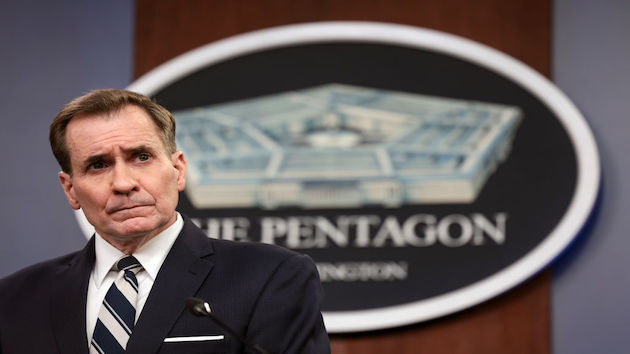 (WASHINGTON) – The Pentagon on Wednesday, for the second day in a row, rejected a plan by Poland to provide Ukraine with its Soviet-era warplanes through U.S. hands, saying the proposal would risk wider war between Russia and NATO.

But Poland’s proposal essentially punted the responsibility to the U.S. by calling for America to take control of the MiG-29 fighter jets at a U.S. air base in Germany and then provide them to Ukraine — an idea the Pentagon roundly rejected as “not tenable.”

Hours after the White House left the door open to a deal Wednesday, saying “logistical and operational” details were being discussed among the U.S., its NATO allies, and Ukraine, there was another surprise: The Pentagon roundly rejected the idea altogether.

“We do not support the transfer of additional fighter aircraft to the Ukrainian Air Force at this time and, therefore, have no desire to see them in our custody either,” Pentagon spokesperson John Kirby said Wednesday.

The back-and-forth by both NATO allies has sparked confusion and exasperation. Poland originally opposed a transfer while the U.S. backed it — until Poland suddenly proposed doing so through the U.S., which now opposes it.

“This is not pingpong. This is about people’s lives. We ask again — make the decision faster. Don’t throw the responsibility. Send us the jets,” Zelenskyy said in a speech Wednesday.

Russia has warned any country from allowing Ukraine to use its airfields to support military aircraft, with Kremlin spokesperson Dmitry Peskov saying Wednesday, “This is an extremely undesirable and potentially dangerous scenario.”

U.S. intelligence has concluded the same thing, according to Kirby, who added that sending Ukraine additional fighter jets is not what Kyiv needs now in its fight against invading Russian forces and their overwhelming bombardment.

“There are alternative options that are much better suited to support the Ukrainian military in their fight against Russia. We will continue to pursue those options,” Kirby told reporters Wednesday.

Ukraine’s air force already has “several squadrons of fully mission capable aircraft,” he added, and the U.S. instead plans to continue providing “the systems that they need most to defeat Russian aggression — in particular, anti-armor and air defense.”

The U.S. has provided Ukraine with Stinger missiles — shoulder-fired anti-aircraft missiles that previous administrations had viewed as too escalatory to provide. The United Kingdom announced Wednesday it would provide its similar system known as Starstreak.

But for now, the U.S. is drawing the line against fighter jets, which U.S. officials say would be logistically difficult to deliver to Ukraine without risking Russian retaliation.

“The intelligence community has assessed the transfer of MiG-29s to Ukraine may be mistaken as escalatory and could result in significant Russian reaction that might increase the prospects of the military escalation with NATO,” Kirby said.

Just days ago, however, Secretary of State Antony Blinken said the U.S. had given “a green light” to Poland to provide the planes directly to Ukraine, although he said it was Poland’s choice.

But two days later, Poland stunned the U.S. by saying it would provide over two dozen MiG-29 fighter jets to the U.S. “immediately and free of charge,” sending them to Ramstein Air Base and “at the disposal of the Government of the United States of America.”

“That actually was a surprise move by the Poles,” Victoria Nuland, Under Secretary of State for Political Affairs, told the Senate hours later, adding, “It wasn’t pre-consulted with us.”

Surprise turned to opposition, with the Pentagon calling the plan “not tenable” for the risk it would pose to U.S. service members.

Western countries have significantly escalated their military aid to Ukraine, providing thousands of anti-tank missiles in recent weeks alone, according to a U.S. official.

But warplanes now seem to be a step too far, along with a no-fly zone. U.S. and NATO officials have repeatedly warned their forces will not get involved in the conflict in any way, fearing a Russian attack that could quickly spiral into war between nuclear-armed states.

Calls for a “limited” no-fly zone — over western Ukraine to allow for refugees to exit and aid to enter, or over humanitarian corridors — have fallen flat, too.

“Introducing, in our case, American service members in Ukraine, on Ukrainian territory or soil, or American pilots into Ukrainian airspace, whether on a full or on a limited basis, would almost certainly lead to direct conflict between the United States, between NATO and Russia, and that would expand the conflict. It would prolong it. It would make it much more deadlier than it already is,” Blinken said Wednesday.

To some analysts, a no-fly zone would not be a silver bullet here either, with the Kremlin using long-range artillery, even indiscriminate shelling, to grind Ukrainian forces and civilian targets down. Russia has now launched more than 710 missiles against Ukraine — about half of which have been launched from within Russian territory, according to a senior U.S. defense official.

“The best way to help protect the skies is through anti-air weaponry, which the U.K. is now going to be supplying to Ukraine,” British Foreign Secretary Liz Truss said alongside Blinken at the State Department.

While the Biden administration has said repeatedly it’s consulting with allies and partners on what other military aid to provide, it’s unclear what else it could be. Some 75 percent of a $350 million package approved by Biden late last month has already made it into Ukrainian hands, according to officials.

But beyond individual missiles, the U.S. may be considering anti-missile batteries like the Patriot system. Nuland declined to speak publicly about that option, but told a Senate panel Tuesday there are “other things” on Ukraine’s “list that we think we can do, and I’ll leave it at that.”

ABC News’s Luis Martinez and Matt Seyler contributed to this report from the Pentagon, Sarah Kolinovsky, Molly Nagle, and Justin Gomez from the White House and Benjamin Siegel from Capitol Hill.