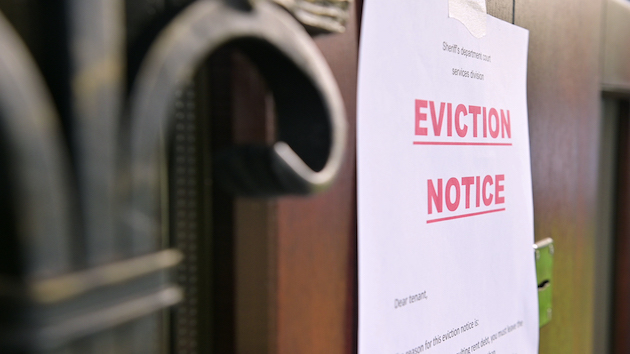 (WASHINGTON) — With 3.6 million Americans at risk of being evicted as soon as Monday, House Speaker Nancy Pelosi repeated her call to the Biden administration to immediately renew the now-lapsed eviction moratorium on Monday after House Democrats over the weekend failed to pass legislation via unanimous consent to extend it to Oct. 18.

“As they have called upon the American people to mask up, to be vaccinated and to take other public health precautions, it is critical, in recognition of this urgency, that they extend the eviction moratorium,” Pelosi said of the Centers for Disease Control and Prevention in a new letter to Democratic colleagues Monday morning. “Putting people on the streets contributes to the spread of the virus.”

It comes after freshman Rep. Cori Bush, D-Mo., who highlights how she was once homeless herself, spent her third night sleeping on the Capitol steps to protest the end of the moratorium even as most House lawmakers had already headed home for the August recess.

As Pelosi says she now awaits a new response from the administration, the White House said last week that it can’t unilaterally extend the moratorium because of a Supreme Court ruling in late June when Justice Brett Kavanaugh, writing for the 5-4 majority, said he would block additional extensions unless there was “clear and specific congressional authorization.”

But Democratic leaders have put the responsibility to extend the measure — which they’ve called a “moral imperative” — back on President Joe Biden and the CDC, which first implemented the moratorium last September, after the Biden administration on Thursday, one day before the House adjourned for August recess, called on Congress to pass legislation.

Despite the 11th-hour scramble by lawmakers, the moratorium expired on Saturday.

With the Senate back in session to focus on unprecedented infrastructure legislation, the chances senators would pivot to a moratorium extension are slim.

“Action is needed, and it must come from the Administration,” Pelosi said in a joint statement with Majority Leader Steny Hoyer, D-Md., Whip Jim Clyburn, D-S.C., and Assistant Speaker Katherine Clark, D-Mass, on Sunday evening. “As the CDC doubles down on mask-wearing and vaccination efforts, science and reason demand that they must also extend the moratorium in light of the delta variant.”

The Democratic leaders also called on the Treasury Department to indicate how state and local governments can more efficiently deliver the billions in rental assistance Congress has authorized since last December. Of the $47 billion available, only $3 billion has been sent out so far.

Pelosi on Monday also announced House Democrats will have a presentation Tuesday from Treasury Secretary Janet Yellen, whose department transferred the funds earlier this year, which were intended to help renters and landlords with payments during the moratorium catch up — but dispersing those out has been a slow process.

While the House adjourned for its August recess, Pelosi has teased that she could call members back to bring legislation. However, without a desire in the Senate to pass an extension, she’s putting the onus back on Biden.

The president, who was leaving Camp David for the White House Monday, has not yet directly responded to Pelosi’s latest letters, but he has also called for the acceleration of congressionally-approved rental assistance funds.

“There can be no excuse for any state or locality not accelerating funds to landlords and tenants that have been hurt during this pandemic,” Biden said in a statement Friday.

Progressive lawmakers including Bush, who has been homeless, and Alexandria Ocasio-Cortez, D-N.Y., have called on their colleagues to do more.

“We cannot in good faith blame the Republican Party when House Democrats have a majority,” Ocasio-Cortez said on CNN’s “State of the Union” Sunday. “Now, there is something to be said for the fact that this Court order came down on the White House, a month ago, and the White House waited until the day before the House adjourned to release a statement asking on Congress to extend the moratorium.”

She and other progressive Democrats, who also penned a letter to urge the Biden administration to take action, joined Bush and activists outside the Capitol over the weekend to draw awareness to what they call a public health emergency.

“Extending the eviction moratorium is a matter of life and death for the communities we represent,” they said in the letter.

Bush, who was still on the Capitol steps Monday, told ABC News over the weekend that she was “frustrated” and “disgusted” that the moratorium was not extended and didn’t have plans to leave.

According to the latest U.S. Census Bureau survey from late June and early July, about 7.4 million adult tenants reported they were behind on rent.