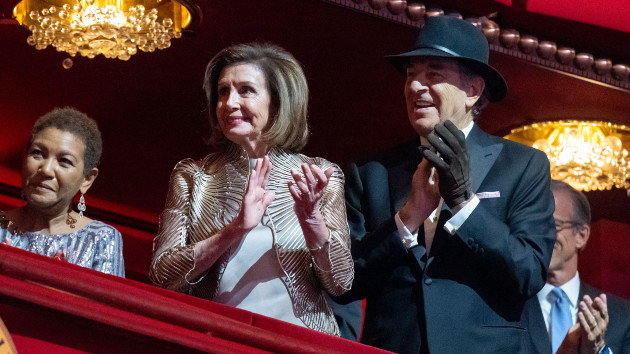 (WASHINGTON) — Paul Pelosi, alongside his wife, House Speaker Nancy Pelosi, made his first public appearance on Sunday since being attacked with a hammer in his home in October, receiving a warm welcome at the high-profile Kennedy Center Honors in Washington.

Pelosi, 82, who is still recovering from his injuries to his head and hands, wore a black hat and a single black glove at the John F. Kennedy Center for the Performing Arts, where he rose to his feet several times to applaud the event. President Joe Biden, seated near him and Vice President Kamala Harris in the mezzanine, threw a fist pump in the air toward Pelosi when he saw him present.

Kennedy Center Chairman David Rubenstein also shouted out the Pelosis’ presence, prompting thunderous applause, a standing ovation, and the couple to raise their clasped hands up together.

“I would like to single out one member of Congress who has been, for more than several decades, really devoted to the Kennedy Center — and her husband of 60 years who’s here with us as well — Nancy Pelosi,” Rubenstein said.

The public appearance comes about five weeks after Paul Pelosi was attacked with a hammer when an intruder broke into the couple’s San Francisco home on Oct. 28, looking for the speaker, sources said. He underwent surgery to repair a skull fracture and “serious injuries” to his right arm and hands, according to the speaker’s spokesperson, and stayed in the hospital for six days.

David DePape, the man accused of assaulting Pelosi, pleaded not guilty to all charges, including attempted murder and attempted kidnapping of a federal official, last month in federal court.

Nancy Pelosi has said the attack affected her thinking on whether to run for Democratic leadership. She announced last month that she would not seek reelection to leadership, as Republicans narrowly took the House majority in midterm elections.

“For my dear husband, Paul, who has been my beloved partner in life and my pillar of support, thank you,” she said in her farewell speech on the House floor. “We’re all grateful for all the prayers and well wishes as he continues his recovery. Thank you so much.”

Earlier Sunday, Biden recognized the 45th class of Kennedy Center Honors — including the band U2, singers Amy Grant and Gladys Knight, composer Tania León and actor George Clooney — in a reception at the White House. Actress Julia Roberts even donned a dress covered in photos of Clooney to support her friend.