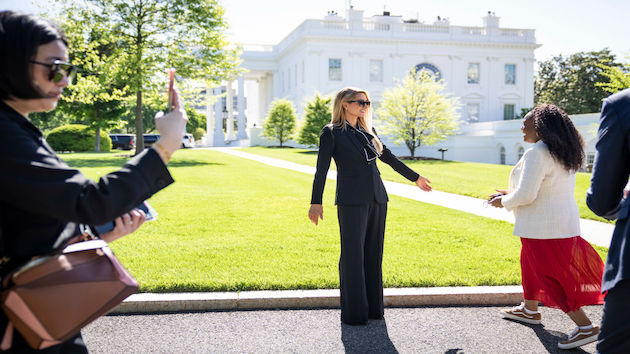 (WASHINGTON) — Paris Hilton walked up a 4-by-4 imitation cinder-block solitary confinement cell erected on the National Mall in Washington, D.C., on Wednesday morning, zipped on a black Juicy Couture sweatshirt with the word “warrior” bedazzled on the back and shut herself in — her knees curled into her chest as she wiped away tears.

The Hilton Hotel heiress, who for more than a year has been advocating for reform in congregate care facilities and residential treatment programs for “troubled” minors, stayed in the box — an art installation with the phrase “prevent the abuse, neglect, & death of institutionalized youth in America” scaled across the side — for about five minutes.

Hilton’s performance preceded a press conference held by survivor-led nonprofit advocacy groups Unsilenced.org and Breaking Code Silence that gathered nearly 200 survivors in D.C. this week to urge federal action on abuse and neglect in these facilities.

Hilton, an entrepreneur, model and actress, said during the press conference that her few minutes in the solitary confinement box were reminiscent of her time at a teen treatment program in the 1990s.

She said she had experienced “firsthand” how traumatizing solitary confinement can be from her stay at Provo Canyon School in Utah and described taking sedatives before getting thrown into confinement.

“Men much larger than me would grab me by my arms, drag me down the hall and physically push me into that 4-by-4 dirty cement room that you see here today,” she said, pointing to the solitary confinement art installation.

“It’s still so difficult for me to speak about all the extremely painful physical, emotional and even sexual abuse out loud,” she added, choking up.

She said she couldn’t recount the sexual abuse she endured at Provo, referring the audience instead to read a USA Today op-ed published on Wednesday morning. In the editorial Hilton chronicled repeated, middle-of-the-night gynecological “exams.”

“On my first day, I was forced to remove all my clothes, squat and cough, and submit to a gynecological exam — all watched closely by male staff,” Hilton wrote.

“I was repeatedly awakened by staff shining a bright flashlight in my face, pulled out of bed and told to be quiet as I was ushered down my dorm’s hallway to an ‘exam room,"” she wrote in the op-ed. “Sleep-deprived and heavily medicated, I didn’t understand what was happening. I was forced to lie on a padded table, spread my legs and submit to gynecological exams.”

Wednesday’s press conference included speeches from a number of others who had been in congregate care facilities and their families, including Nehemiah Wood, the brother of 17-year-old Naomi Wood, who spoke out about his sister’s death from medical neglect at a girls’ facility in Florida that is now permanently closed.

“Naomi’s death is a heartbreaking example of hundreds of preventable deaths due to neglect and physical abuse at the hands of the troubled teen industry staff who claim to care for and provide mental health treatment to over 120,000 youth every year,” Hilton said.

“For too long, our government has allowed these deceptive industries to operate in the shadows without any real transparency or accountability,” she said.

Republican Utah state Sen. Mike Mckell, who previously joined with Hilton in creating Utah legislation to reform the “troubled teen” industry, attended the press conference. That bill was signed into law by Utah’s governor in March 2021.

On Tuesday, Hilton met with a number of lawmakers and was seen at the White House to promote a bill, yet to be introduced, that will further protections for minors in the industry.

The Stop Institutional Child Abuse Act is being pioneered by Democratic Rep. Ro Khanna of California and Sen. Jeff Merkley of Oregon. Breaking Code Silence on its Instagram account wrote that the bill’s introduction was halted this week for lack of sufficient bipartisan support.

“That legislation was set to be introduced to Congress this week, but after consulting with our advisors and sponsors, we’ve come to the difficult decision to postpone the introduction of the federal bill,” Breaking Code Silence wrote, adding, “In today’s political climate, to pass a bill of any kind, it needs to have bipartisan support. Right now, we’re looking to get conservative members of Congress to sign on to our bill.”

Hilton was also seen meeting with Republican Sen. Chuck Grassley of Iowa. A spokesperson for the senator told Axios that “the meeting was genial and went well, concluding with their Twitter picture.” She also met with Sen. Tim Scott, R-S.C.

Hilton has previously come to the nation’s capital to advocate for congregate-care reform. She was in Washington last year in support of the Federal Accountability for Congregate Care Act, introduced in October 2021, led by Khanna, Merkley and Rep. Rosa DeLauro, D-Conn., and Rep. Adam Schiff, D-Calif. The bill is still making its way through Congress.

Before her visit last year, Hilton had opened up about her 11-month experience at Provo Canyon school in her 2020 documentary, “This is Paris,” and in a Washington Post op-ed.

“It was the most painful, traumatic experience of my life… I would wake up and it was a nightmare, being physically abused, yelled at, restrained, locked in rooms, forced medications, being watched by male staff while I took a shower — I had basically no human rights,” Hilton told ABC’s Kaylee Hartung on “Nightline” last year.

The Provo school in Utah is still operating today. In September, the school in a statement to ABC said it had changed ownership shortly after Hilton’s stint at the school and could not comment on the situation but do not “condone or promote any form of abuse.” ABC has reached out for further comment.

“We deserve to be treated like human beings. These kids are treated worse than someone would be in prison. It’s horrifying,” Hilton told Hartung last year.