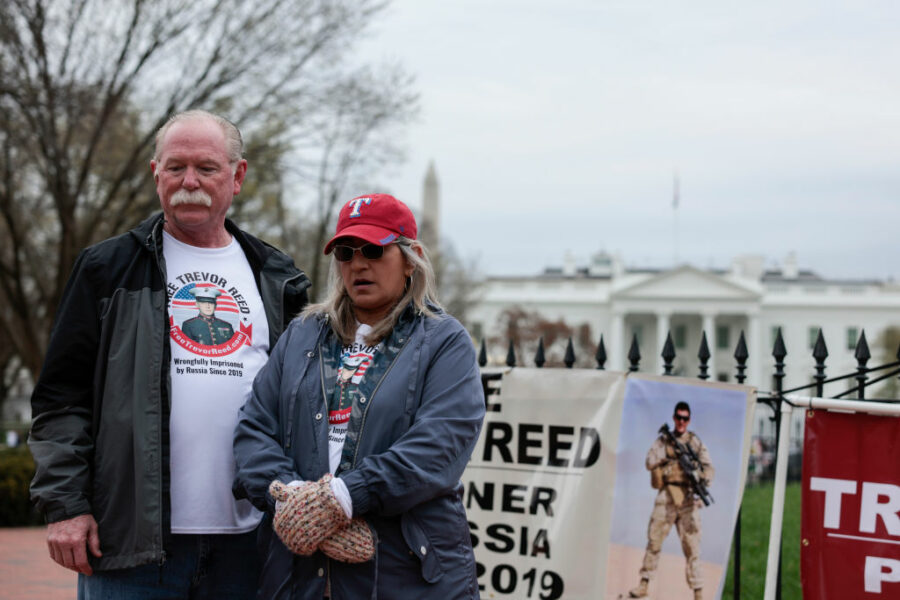 (WASHINGTON) — The parents of Trevor Reed, a 30-year-old U.S. citizen and former Marine currently who has been imprisoned in Russia since 2019, demonstrated outside the White House on Wednesday to urge President Joe Biden to do more to bring their son home amid Russia’s violent invasion of Ukraine.

When asked by ABC News what they would say to Biden, Joey and Paula Reed said they wanted to remind him of their son’s service to the county and to him personally, highlighting his experience as a presidential guard at Camp David.

“We want to tell him about our son — a little bit that he hasn’t gotten from a report from someone. Remind him that our son added time to his Marine Corps service so he could be a presidential guard,” Joey Reed said.

The parents’ pleas come as the State Department announced a new advisory Wednesday warning Americans not to travel to Russia or Ukraine and making it explicit that U.S. citizens in Russia could be singled out “including for detention.”

Trevor Reed has been imprisoned for 956 days and is on the third day of his second hunger strike in the last six months in a prison in Mordovia, Russia, his parents say. Reed suspects he has tuberculosis and a broken rib but has not received “meaningful medical care,” they said, so they staged a protest outside the White House to raise awareness about his case. They said he spends most of his days in solitary confinement, constantly getting punished for mundane things like not making his bed properly.

“During the day because the room has no real heating and there’s cracks in the windows you see your breath all day long. He coils up on the floor next to a hot water pipe to stay warm and then he’s given violations for laying on the floor during the daytime,” his father told reporters.

The Reeds repeatedly told reporters that they want a prisoner swap in exchange for their son.

“Our son was willing to give his life for President Biden and his family. And so it’s not just that he served his country, he served this president in particular. And not that all of the Americans that are held around the world shouldn’t get everything that our government can give — if that means prisoner trades then so be it, let’s get our Americans home,” he said.

Trevor Reed has been detained in Russia since the summer of 2019 and was sentenced in 2020 to nine years in a Russian prison colony, convicted on charges of violently assaulting two police officers in Moscow following a drunken party in Moscow where he was visiting his girlfriend. Reed’s family and U.S. officials say those charges and ones brought for former Marine Paul Whelan, also being detained in Russia, were fabricated in order to seize them as bargaining chips.

When Biden was in Reed’s home state of Texas earlier this month, his motorcade drove past Reed’s parents as they demonstrated a speech he was giving in Fort Worth about helping veterans. Biden called an hour later to apologize for not stopping and promised to meet them in person, according to the White House.

“After his event in Fort Worth, the President called Joey and Paula Reed to reiterate his commitment to doing everything he can to bring their son home, to staying in close touch with them through his national security team, and to finding a time to meet in person,” a White House official said on March 8.

But in the 22 days since that phone call, the Reed family says they have not received any follow-up from a Biden official.

The White House had not responded to repeated questions from ABC News since Thursday about why it hasn’t yet reached out to Reed’s parents until it provided a statement about an hour before the Reeds planned to speak with reporters outside the White House.

“The president cannot imagine the pain the Reed family is going through every day,” a senior Biden administration official said in a statement. “The president is committed to bringing Trevor and every American unjustly detained overseas home. It is the State Department’s highest priority.”

Asked after prepared COVID-related remarks Wednesday whether he would see Reed’s parents while they were in Washington, Biden said: “I’m gonna see if I can get to see them. They’re good people.”

Pressed on whether that meant he would see them Wednesday, Biden said, “We’re trying to work that out.”

“Each day, we worry that our son will become the next Otto Warmbier,” the Reed parents said in a statement, referring to an American student who died after detainment in North Korea. “We hope the President will be able to find the time to see us. We need his Administration to stop deliberating and start acting. We believe the President (whom we voted for) is the only person who can save our son’s life.”

The Reeds have also used the moment to raise awareness about other Americans detained in Russia, including WNBA star Brittney Griner and Whelan, who was sentenced to 16 years in prison in what the U.S. ambassador to Russia called a “mockery of justice.”

“The time is now to bring home Trevor, Paul Whelan and Brittney Griner. As we have said for more than a year, we continue to worry escalating tensions, or rhetoric, could lead to Russian authorities inventing additional false charges against Trevor,” they said in the statement.

Trevor’s parents’ said they had asked their son, in one of the few times they’ve been able to speak since his imprisonment, what he would tell the president — but said he had nothing to say.

“I think that he’s forgotten about me,” Reed allegedly said.

ABC News asked Joey if he thought Biden’s comment that seemed to imply he wanted a regime change in Russia hurt their chances of getting their son home.

“You’d have to ask Putin,” he said. “We believe that — the comments about Putin — we don’t want to comment on them but obviously they’re not helpful. But I guess they speak for themselves,” he added.

They said they plan to stay in Washington through Friday.