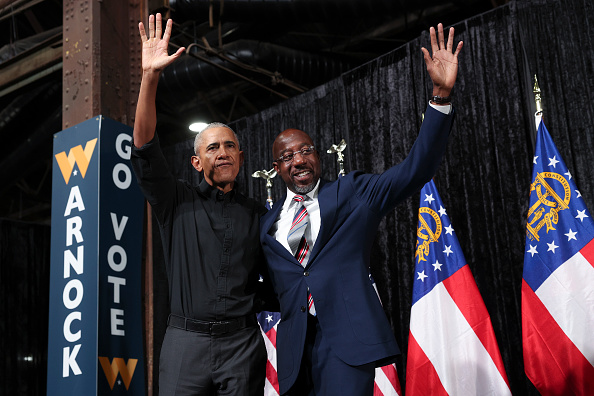 (ATLANTA) — Visiting Georgia on Thursday to campaign for Democratic Sen. Raphael Warnock, former President Barack Obama urged the crowd to turn out at the polls, laying out why the state’s Tuesday runoff is significant despite a decided Senate majority, touting Democratic accomplishments and taking multiple jabs at Republican Herschel Walker, who has lobbed his own criticisms at Warnock.

“Some folks are asking, ‘Well, if Democrats already have control of the Senate, why does this matter? What is the difference between 50 and 51?’ The answer is a lot. Let me break it down for you: An extra senator gives Democrats more breathing room on important bills. It prevents one person from holding up everything,” Obama said at a rally in Atlanta.

“The biggest reason 51 is better than 50 because it means Rev. Warnock will keep representing you in Washington,” Obama said to cheers.

“As your senator, Rev. Warnock hasn’t been off chasing wacky conspiracy theories, he hasn’t been drumming up fear and division. They talk about some folks being show horses and some folks being workhorses — and you’ve got a workhorse here. He’s been working,” Obama said, pointing to Warnock.

After Walker recently went viral for his campaign speech comments about vampires and werewolves, Obama joked that he also had those debates … when he was 7 years old.

“When you spend more time thinking about horror movie fantasies than you do thinking about the people you want to represent, that says something about your priorities,” Obama said.

“Mr. Walker decided he wanted to be a werewolf, which is great as far as I’m concerned. He can be anything he wants to be … except United States Senator,” the former president said.

Obama also echoed Warnock’s closing campaign pitch, which has largely revolved around what Warnock called a contrast in character — rather than just politics — between him and Walker. (Walker, in turn, has said Warnock has controversies of his own and said Warnock doesn’t believe in “redemption.”)

Giving a midterm report card, Obama celebrated that many election deniers had lost.

“You may be feeling pretty good, because a few weeks ago people turned out to vote. And as a result, Democrats still have control of the Senate. And because of some of other concerted efforts, in a lot of important states, many of the most egregious, potentially dangerous and — let’s face it — somewhat crazy folks, election deniers, got beat. That’s the good news,” he said. “It turns out that most Americans prefer leaders who want to bring people together, to solve real problems as opposed to conspiracy theorists and fear mongers. That makes me somewhat optimistic. It’s good to know that folks would prefer normal to lunatics.”

When Warnock took the stage ahead of Obama on Thursday, he emphasized a common throughline in his campaign: “This is about character and competence.”

“I don’t mind giving credit where credit is due: Herschel Walker was an amazing athlete,” he said of the University of Georgia football legend. Warnock added, “He was an amazing running back, and come next Tuesday we’re gonna send him running back to Texas.”

Talking about how he fought for Saturday voting, Warnock told the crowd that the record-breaking turnout in the runoff so far had “inspired” him but for supporters not to become complacent.