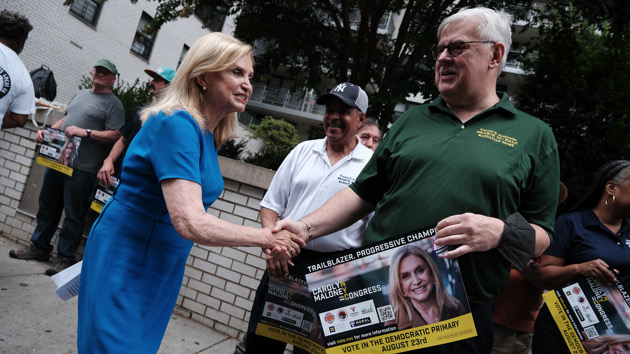 Nadler, who chairs the judiciary committee, and Maloney, who helms the committee on oversight and reform, were drawn into the same seat, the 12th, in an unexpected twist in the redistricting process that now leaves New York voters deciding between two city titans with established power bases.

Attorney and former Obama staffer Suraj Patel, a 38-year-old progressive, is also running on a generational argument against the two septuagenarians.

Nadler has emerged as the front-runner of the trio in the lead-up to Tuesday’s primary, but Election Day will cap off a frustrating and nasty stretch of the race for city residents, observers say.

“The loser in this is New York. New York voters have been forced into this messy situation of being forced to make a choice that they never planned to and never intended. These are two members in good standing with the electorate,” said New York City-based Democratic strategist Jon Reinish. “If you’re a New York City voter, it really sucks to have to make this choice.”

Nadler and Maloney, both elected in 1992, have longstanding ties to different parts of Manhattan.

Nadler for years represented a district anchored in the Upper West Side and Maloney’s old seat covered the Upper East Side, two wealthy enclaves in New York City.

Patel hasn’t held public office but came within 4% of beating Maloney in a primary in 2020.

Nadler and Maloney have long been allies in the House and lamented the circumstances they were handed when a Democratic-drawn House map for New York, after the last census, was tossed in favor of one lumping their districts together. Yet once the race got underway, barbs started to fly.

Nadler has torn into Maloney’s long voting record on high-profile issues, including her past support for the Iraq War and Bush-era Patriot Act and opposition to the Iran nuclear deal during the Obama administration. Nadler also sought to characterize Maloney as a COVID-19 vaccine skeptic, a particularly sharp elbow to be thrown during the pandemic. (Her website states that she believes “vaccines are safe, effective, and absolutely essential for public health.”)

Maloney, meanwhile, has seemingly gone after Nadler’s age. While Nadler, 75, is one year Maloney’s junior, she appeared to pour jet fuel on chatter about his stamina, particularly after he sat at a primary debate while Maloney and Patel stood.

Earlier this month she expressed concerns about “if for some reason someone will not serve their term,” citing “tons of rumors out there.” She later reportedly said she thinks Nadler would finish another term.

Patel has argued that it’s time for a change in Congress while also hitting Nadler and Maloney for wishy-washy answers over whether President Joe Biden should run for reelection in 2024.

“This is not 1992 anymore,” Patel said in a press conference on Monday. “From abortion rights to gun control to climate change, we need energetic, new leaders, optimists with hope and ideas and energy, and we are incredibly proud of the way we have conducted this campaign.”

Early in the race, it was speculated that Nadler and Maloney would split the so-called establishment vote and that Patel could win on his fresh-faced message.

“My thought was that Patel could benefit from that being from a new and younger generation. However, maybe it has benefited Nadler and to an extent Maloney that Washington Democrats over the past couple of weeks have some wind at their backs, seem to have opened up their eyes, realized that they’re in the majority and have delivered. And maybe that has benefited these two institutionalists,” Reinish said, referring to recent major legislation congressional Democrats have sent to Biden’s desk.

Nadler has enjoyed a burst of momentum in the final stretch, winning the coveted endorsements of The New York Times’ editorial board and Senate Majority Leader Chuck Schumer — support that led Maloney to decry the influence of the “old boys’ network that sticks together.”

Regardless of the outcome Tuesday, New York City will be losing a senior member of Congress who’s built up a career’s worth of chits in the Capitol.

Democrats lament that as a self-inflicted loss after their heavily gerrymandered House map was challenged by Republicans and ultimately scrapped by a state court, handing the map-drawling process to an outside special master who did not take Democratic priorities into account.

“I think that they naively thought that there would never be a lawsuit that could effectively overturn their maps and render their process moot,” said Reinish, the strategist. “And I think that they did not plan at all well for that. And I think it was very easy for the Republicans to find a judge to do it. They did it very successfully.”