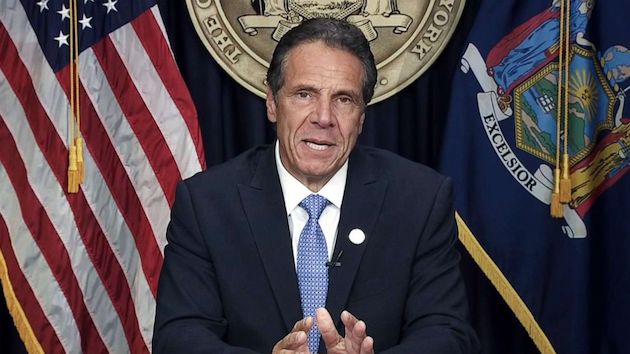 Office of the Governor of New York

(NEW YORK) — New York Gov. Andrew Cuomo has announced he will resign from office following accusations of sexual harassment and inappropriate conduct from a number of women, including former staffers and one current staffer.

His resignation will be effective in 14 days, Cuomo said.

“Specifically, we find that the Governor sexually harassed a number of current and former New York State employees by, among other things, engaging in unwelcome and nonconsensual touching, as well as making numerous offensive comments of a suggestive and sexual nature that created a hostile work environment for women,” the report said.

In announcing his resignation, Cuomo said his instinct was to fight through the controversy, which he said is politically motivated.

“This is about politics, and our political system today is too often driven by extremes,” Cuomo said.

However, Cuomo said, the situation on its current trajectory would create months of controversy, consume government, and cost taxpayers millions of dollars.

As a result, he said, “the best way I can help now is if I step aside.”

Cuomo, the son of legendary former Gov. Mario Cuomo and the heir to his deep political legacy, gained renewed national attention during the pandemic with his daily COVID-19 briefings.

But his image took a hit with the drumbeat of allegations from women surfacing as well as questions about his administration failing to fully disclose the nursing home deaths caused by the virus.

The governor admitted that the state miscategorized the nursing home data but said it was because it had not been verified.

Cuomo, however, has vehemently denied the allegations of sexual harassment and inappropriate conduct, including a reported sexual assault. In a March 12 press conference he told reporters, “I did not do what has been alleged,” but defended the right of his accusers to come forward and tell their stories.

At Tuesday’s press conference, employment discrimination attorney Anne Clark, one of the investigators assigned to lead the probe, presented findings from the report, including specific examples of the governor making suggestive comments and engaging in unwanted touching that 11 women found “deeply humiliating and offensive.”

In at least one instance, the investigation determined that the governor sought to retaliate against a woman who leveled accusations against him, identified in a report released by the AG’s office as Lindsey Boylan.

In February, Boylan, a former special adviser to the governor, and Charlotte Bennett, a former health policy adviser, both detailed examples where Cuomo allegedly spoke inappropriately while they were both employed by the governor’s office. Boylan initially made the allegations in a series of tweets in December, and Cuomo denied the accusations.

In an instance involving one of Cuomo’s unnamed executive assistants, the governor was found to have “reached under her blouse and grabbed her breast,” according to the report.

The same woman also recounted a circumstance in which “the governor moved his hand to grab her butt cheek and began to rub it. The rubbing lasted at least five seconds,” the report said.

After allegations were first made against Cuomo, other women began accusing the governor of various forms of inappropriate conduct.

Anna Ruch claimed Cuomo touched her and asked if he could kiss her during a wedding reception in September 2019.

Karen Hinton, a former press aide to Cuomo when he was the secretary of the U.S. Department of Housing and Urban Development, told The Washington Post that while later working as a consultant, Cuomo had summoned her to his hotel room.

Hinton said she pulled away from Cuomo, but he pulled her back toward his body, holding her before she backed away and left the room.

Another woman alleged the governor groped her during a visit to the executive mansion in 2020, the Albany Times Union reported March 10.

Sherry Vill, came forward with allegations that the governor inappropriately touched and kissed her in 2017.

Cuomo met with her during a tour of flood damage near her town in Greece, New York, she said. The governor took her by the hand, pulled her in and kissed her on both cheeks, Vill said.

“That’s what Italians do, kiss both cheeks,” the governor allegedly told Vill.

Vill said at the time she was not pressing charges or filing suit for this incident but was planning to meet with the state attorney general to discuss the matter.

“During times of crisis, the governor has frequently sought to comfort New Yorkers with hugs and kisses,” Cuomo’s attorney, Rita Glavin, said. “As I have said before, the governor has greeted both men and women with hugs, a kiss on the cheek, forehead or hand for the past 40 years.”

After a back and forth on Feb. 28 between the governor’s office and the New York attorney general’s office over who would oversee an investigation into the allegations, Cuomo gave James the approval to look at the case.

State Assembly Leader Carl Heastie announced on March 11 that he authorized the Assembly Judiciary Committee to begin an impeachment investigation. On Tuesday, in the wake of the attorney general’s report, he said the Democratic majority had lost confidence in the governor.

“After our conference this afternoon to discuss the Attorney General’s report concerning sexual harassment allegations against Governor Cuomo, it is abundantly clear to me that the Governor has lost the confidence of the Assembly Democratic majority and that he can no longer remain in office,” Heastie said in a statement. “Once we receive all relevant documents and evidence from the Attorney General, we will move expeditiously and look to conclude our impeachment investigation as quickly as possible.”

Cuomo initially denied the allegations from the first two victims but acknowledged on March 3 that he “acted in a way that made people feel uncomfortable.”

“It was unintentional, and I truly and deeply apologize for it. I feel awful about it and, frankly, I am embarrassed. And that’s not easy to say,” he said.

After more women came forward, he made similar statements and insisted he was not going to resign during news conferences in March.

Cuomo was elected governor in 2010 after serving as New York’s attorney general for three years. He won re-election in 2014 and 2018 and served the state during many major moments, including Superstorm Sandy.

The governor began his political career working as a campaign manager for his father and also worked under New York City Mayor David Dinkins as the chair of the New York City Homeless Commission.

Cuomo served as the assistant secretary for Community Planning and Development under the Clinton administration and was later appointed as the secretary of the Department of Housing and Urban Development during former President Bill Clinton’s second term.

He first attempted to run for New York governor in 2002 but dropped out before the Democratic primary. Four years later, he won the election for the state’s attorney general.