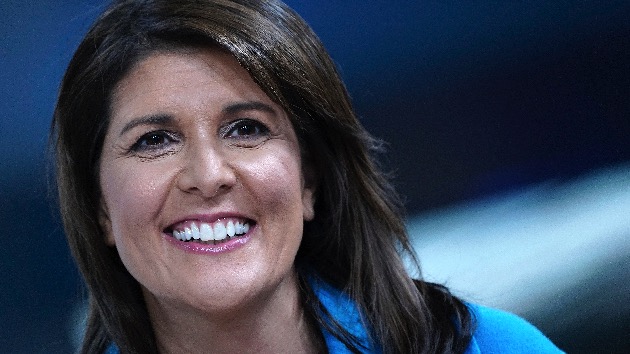 (NEW YORK) — Nikki Haley, who served as U.S. ambassador to the United Nations during the Trump administration, will hit the campaign trail next week with Virginia’s Republican gubernatorial nominee, Glenn Youngkin, a sign of how seriously Republicans are taking what’s likely the most competitive statewide race of the year.

“Glenn Youngkin has what it takes to get Virginia moving again. He’s an experienced businessman and problem solver who will create jobs and opportunity, improve schools and deliver results for the people of Virginia,” Haley said in a statement to ABC News.

“Her visit shows that Virginia really is ground zero this year — we have to get our economy moving again, fix our schools, support law enforcement and take care of our veterans,” said Youngkin, who added he’s honored to have Haley on the trail with him. “When voting starts in September we have a huge opportunity to bring a brighter day to our commonwealth.”

Excluding Texas Sen. Ted Cruz, who’s a friend of Youngkin’s and who endorsed him ahead of the GOP nominating convention in May, Haley, South Carolina’s first female governor and a potential 2024 presidential candidate, will be the most high-profile Republican to stump for the former investment firm CEO, and it marks her first time on the trail with a candidate this cycle.

Only Virginia and New Jersey hold off-year elections for their top executive posts, and while both states have trended blue in recent years, neither race is a done deal for Democrats. In Virginia specifically, November’s election will test whether the commonwealth has completely lost its battleground status or if Democrats’ dominance in statewide and legislative elections over the last four years was more a rejection of former President Donald Trump than the Republican Party altogether.

Haley and Youngkin will campaign together on Tuesday in Richmond and Wednesday in Northern Virginia. Stopping in two reliable Democratic regions underscores the nominee’s approach to the general election campaign, painting himself as moderate candidate while Democrats accuse him of hiding views they are casting as “extremist.” In Richmond, they plan to meet with volunteers and give remarks, and in Northern Virginia, they will hold events with two Youngkin campaign coalitions, Women for Glenn and Veterans for Youngkin, to discuss veterans and economic issues. Youngkin announced his plan to support Virginia’s veterans earlier Thursday. Over the past two weeks, he’s also unveiled the first part of his comprehensive education plan, which focuses on schools, students and studies, and his plan to combat human trafficking in the commonwealth.

Youngkin is facing Democrat Terry McAuliffe, who is also a former businessman.

But McAuliffe, also a former chairman of the Democratic National Committee, has already been elected governor of Virginia before. In 2013 he broke the so-called “Virginia curse” of candidates losing the commonwealth’s off-year gubernatorial race if they had the same party affiliation as the current occupant of the White House. With his friend President Joe Biden in the White House now, McAuliffe is aiming to do that again.

In Virginia, incumbent governors cannot seek consecutive terms. McAuliffe, who beat out four other Democrats in June’s primary, is pitching himself as the candidate who can build on progress that started in his first term and continued under current Gov. Ralph Northam’s administration.

While in Richmond next week, Youngkin and Haley may come face-to-face with newly unveiled billboards, paid for by the Democratic Governors Association, accusing Youngkin of “hiding from debates” with McAuliffe.

The McAuliffe campaign announced in mid-June he had accepted invitations for five general election debates. Youngkin has so far accepted one debate invitation, at the Appalachian School of Law sometime in August or September. A campaign spokesperson said he accepted the invitation back in March. In a statement to ABC News, the spokesperson said Youngkin “can’t wait to debate career politician Terry McAuliffe,” but plans to participate in three debates total with him, not five.

“Only weak incumbents like McAuliffe need to debate five times in the hopes of making up lost ground,” the spokesperson said.

In the DGA-sponsored billboards, announced Wednesday, Youngkin is seen ducking in the corner, and a photo of Trump is prominently displayed. Tying Youngkin to Trump, who has endorsed the Republican candidate, has been a recurring play by Democrats and the McAuliffe campaign.

One billboard says Youngkin is “hiding from debates to hide his extreme views (and that he’s endorsed by Donald Trump),” while the other says, “Hey Glenn Youngkin, scared to debate? (We would be too. But we’re not Donald Trump’s hand-picked candidate for governor).”

While Trump has endorsed Youngkin, calling the nominee his “hand-picked candidate” is misleading, as the former president did not back him until Youngkin had already secured the nomination. Trump has not sent a statement about Youngkin or the Virginia gubernatorial campaign since the endorsement.

Haley endorsed Youngkin, along with the current Republican governors of Texas, Maryland, North Dakota and Tennessee on June 16. Considered a White House hopeful, she added to the 2024 speculation with a late June multi-stop visit to Iowa, which has held the first Republican nominating contest of the presidential primary calendar every four years since the 1970s.

Haley gave the keynote address at the Republican Party of Iowa’s annual Lincoln Dinner in Des Moines and also participated in a few other events and fundraisers for Republicans, according to the Des Moines Register. While Haley, who founded the Stand For America PAC, insisted during that visit that her focus is on helping Republicans take back control of the House of Representatives and U.S. Senate in the 2022 midterms, trips to the Midwest state, or the other three early primary states — New Hampshire, Nevada and South Carolina — even three years prior to a presidential election year, don’t go unnoticed.

She’s not the only potential GOP contender fueling speculation. Arkansas Sen. Tom Cotton was in Iowa last week, and South Carolina Sen. Tim Scott made a trip in mid-April. Former Vice President Mike Pence’s first post-administration speech was in South Carolina in late April, and he’s since gone to New Hampshire, too, where he said he and Trump may never “see eye to eye” on the events of Jan. 6. Former Secretary of State Mike Pompeo, another Trump administration alum, has already made at least one trip to Iowa, but will be there again next week, along with Pence and South Carolina Gov. Kristi Noem, another possible candidate. At the end of the month, Pompeo will be giving the keynote speech at the South Carolina Republican Party’s signature fundraiser.

Looming over all of these visits, however, is the former president, who has repeatedly teased a comeback bid in 2024 while continuing to baselessly claim that he was the real winner in November’s election. Haley has said she would not run if Trump does.