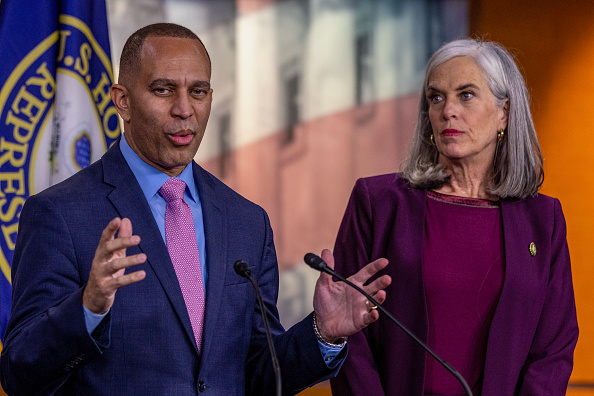 (WASHINGTON) — The start of the 118th Congress may be remembered for the already historic, and ongoing, vote to elect a new House speaker — which, for the first time in a century, is taking multiple rounds and multiple days.

But there were other “firsts” as the members-elect of the House and Senate gathered in Washington, D.C.

Below, a look at some of the most notable — though there are more.

Jeffries, of New York, was first elected in 2012 and previously served in other posts in Democratic leadership.

He took the top spot after Speaker Nancy Pelosi announced in November that she would step down from her role.

Most women lawmakers ever

According to the Pew Research Center, 28% of the incoming lawmakers in Congress are women, which is the most ever. Those 153 members, which include some non-voting roles, compare to 96 in the Congress that ended in 2013.

There are 128 women in the House and 25 in the Senate, both of which set or tie records.

Among those lawmakers is Rep. Marcy Kaptur, D-Ohio, who is now the longest-serving woman in Congress’ history. She was first elected in 1983 — 40 years ago.

In the Senate on Tuesday, another woman broke a barrier when Sen. Patty Murray, D-Wash., was sworn in as president pro tempore, the second highest-ranking official in the chamber. Murray has served since 1993 and succeeds Vermont Sen. Patrick Leahy, who retired.

“It’s not lost on me the significance of what it means to be the first woman to serve in this role. This is another sign that slowly but surely, Congress is looking more like America,” Murray wrote on Twitter after being sworn in by Vice President Kamala Harris, who is the first woman, first Black person and first person of Asian descent in her role.

Before Tuesday, the last time a vote for House speaker took multiple rounds and multiple days was 1923, when Frederick Huntington Gillett was elected in late December of that year.

House Republican leader Kevin McCarthy, who unsuccessfully sought the speakership in 2015, has been stymied so far by a minority of his conference but insists he will ultimately win a majority to lead the chamber.

Most GOP members support him, but some hardliners have alternatively backed Reps. Andy Biggs and Jim Jordan instead, leaving the speaker’s chair unfilled.

The House adjourned late Tuesday and will resume business on Wednesday at noon.

Among the newly elected representatives is Maxwell Frost, a 25-year-old Florida Democrat, who is poised to be sworn in as the first Gen Z member of Congress.

“I think we’re in this politics now where people are scared to talk about their North Star,” Frost told ABC “This Week” co-anchor Jonathan Karl recently. “And I think it’s important that we not lose sight of that — health care for everybody, ending gun violence, combating the climate crisis. These things are really important. And even though we’re not going to get it next year, you can’t take a first step in a journey if you don’t know where you’re going.”

In Vermont, former state Sen. Becca Balint is about to become the first woman and first openly LGBTQ person sworn in to represent the House from her state.

Meanwhile California and Oregon saw or will soon see the swearing-in of their first Latino and Latina lawmakers elected in Congress: Democratic Sen. Alex Padillo and Reps. Andrea Salinas, a Democrat, and Republican Lori Chavez-DeRemer, respectively.

And in New York, George Santos, who won the first congressional race between two openly gay people, has said he plans to soon take his seat representing his state’s 3rd Congressional District despite a cloud of controversy and legal troubles.

While newly elected senators were sworn in on Tuesday, the House cannot swear in its members until after a speaker is chosen.