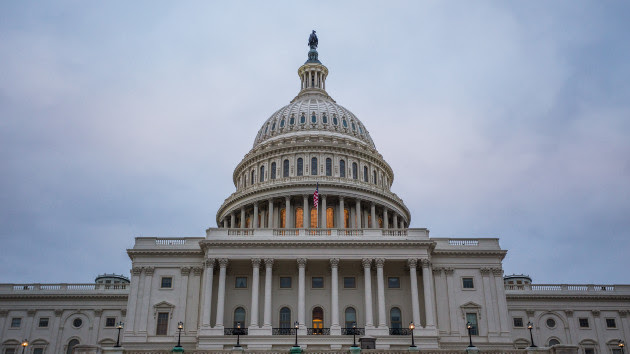 (WASHINGTON) — Republicans are facing a leadership drama as they take control of the House Tuesday.

As the 118th Congress convenes, the first order of House business is the election of a new speaker — and current Republican leader Kevin McCarthy could be stymied by a group of hardliners demanding concessions.

Because the GOP holds only a slim majority, a small number of defections could stop McCarthy from gaining the office he’s long sought.

Here’s how the story is developing. All times Eastern:

McCarthy told ABC News, after stepping off the House floor, that the current vote against him was “exactly what we thought it’d be.”

McCarthy added that this vote could go on for days and that “we got a number of members who are trying to fight for their own personal items” instead of for the country.

When asked how he what he can do to persuade the large number of members who voted against him by voting for others, McCarthy said he needs to convince them that “they don’t win gavels by trying to threaten or leverage somebody … I don’t think that’s what their constituents elected.”

After the first round of voting, no member obtained the 218 votes needed to become House speaker, but Democrat Hakeem Jeffries earned more votes than Kevin McCarthy — on the first day of a new Republican-controlled House.

Jeffries received 212 votes to McCarthy’s 203. Far-right Republican Andy Biggs of Arizona received 10 votes, and there were nine votes for others, including six for Rep. Jim Jordan, and, in a surprise move, Rep. Chip Roy of Texas voted for Florida’s Byron Donalds.

Nineteen Republicans broke from McCarthy, who could only afford to lose four, marking a stunning defeat by 15 votes. Despite having a majority this Congress, McCarthy got fewer votes this time than the last time he ran for speaker against Nancy Pelosi.

While McCarthy has signaled he’s up for more voting rounds, he faces a steep hurdle in a second vote with so many lawmakers to win over — and the potential for Republicans to nominate another member, such as No. 2 Steve Scalise.

Jan 03, 1:37 PM EST
McCarthy gets quick standing ovation after voting for himself

After standing to cast a voice vote for himself, Kevin McCarthy smiled as he got a round of applause from his GOP supporters – even as it appeared that he would lose the first ballot for speaker.

McCarthy faced enough defections from his conference – with some voting for Rep. Andy Biggs of Arizona or Rep. Jim Jordan of Ohio – to likely not prevail in the first tally.

But the quick standing ovation for McCarthy was both indicative of the support he still has in the House Republican Conference and the challenges of a slim Republican House majority.

Jan 03, 1:41 PM EST
Appears McCarthy will not have votes on first ballot to be elected

The majority of House Republicans applauded when Rep. Elise Stefanik rose to nominate Kevin McCarthy — but more than a dozen, most of them sitting by the center aisle in the second to last row of the chamber, sat on their hands. The applause for McCarthy was hardly thunderous.

And with every vote against McCarthy, the sounds of murmuring in the chamber grew, as it also grew more obvious that McCarthy will not have the votes on the first ballot to be elected speaker.

In contrast, Rep. Pete Aguilar, D-Calif., had a sustained standing ovation when he nominated Rep. Hakeem Jeffries, D-NY. Once the applause died down, Aguilar declared, “Today, House Democrats are united” — prompting even louder and more sustained applause from Democrats — while McCarthy sat silently and stone-faced on the other side of the aisle.

As McCarthy entered the rear of the chamber through the center door about 15 minutes earlier, he did so quietly and with little fanfare. Most people on the floor seemed not to notice. He walked all the way down to the area in front of the clerk before somebody went to talk to him, and it was a staffer for Rep. Tom Cole, R-Okla.

A tense roll call vote for speaker is beginning.

In alphabetical order, members are being asked to say aloud whom they are voting for as speaker.

Jeffries has made history as the first Black leader to be elected leader a congressional caucus. He was elected by Democrats in late November after Rep. Nancy Pelosi announced she was stepping down from the role.

“Today, madam clerk, House Democrats are united by a speaker who will people over politics,” Aguilar declared, an apparent dig at Republicans as the party struggles to unite behind a candidate for speaker.

“Hakeem Jeffries has worked his entire life to improve economic opportunity for all people. He’s committed to strengthening the American dream by lowering costs for working families, building safer communities by taking weapons of war off streets and by creating good-paying jobs in industries of the future.”

“He does not traffic in extremism,” Aguilar continued. “He does not grovel to or make excuses for a twice impeached so-called former president. Madam clerk, he does not bend a knee to everyone who would seek to undermine our democracy because, madam clerk, that’s not what leaders do.”

Jeffries and Pelosi greeted each other on the House floor on Tuesday morning.

Stefanik, a McCarthy ally, touted the Californian’s efforts to bolster House Republicans’ ranks by campaigning for diverse candidates from coast to coast.

“Since the day Kevin was elected as our leader, House Republicans have only gained seats and won,” she said. “Kevin knows what we stand for, he knows when to engage in the fight, and he knows how to build consensus.”

And while her speech was mostly focused on building up McCarthy, Stefanik also offered a dig at his detractors, boasting that “Kevin McCarthy has earned this speakership of the ‘People’s House."”

Ahead of the vote for speaker, the magnetometers placed outside the doors of the House chamber in the wake of the Jan. 6 attack on the U.S. Capitol have been removed, as the new GOP majority demanded.

The GOP’s new proposed House rules had called for removing the magnetometers.

As House Republicans enter the 118th Congress in disarray over who will hold the speaker’s gavel, the Democrat-controlled Senate opened with Vice President Kamala Harris swearing in new members and those who won reelection in November.

Among the new faces in the chamber are Pennsylvania’s John Fetterman, Alabama’s Katie Britt and Missouri’s Eric Schmitt.

Arizona’s Mark Kelly and Georgia’s Raphael Warnock were sworn in for their first full, six-year terms.

Despite losing majority control in the House, Democrats expanded their advantage in the Senate by one seat.

In a closed-door meeting with House Republicans, Kevin McCarthy made a last-ditch case for speaker.

“I’m not going to go away. I’m going to stand until the last four friends stand with me,” he told the GOP members, according to a source in the room.

“I earned this job,” McCarthy said. “We earned this majority, and goddammit we are going to win it today.”

Rep.-elect George Santos, who has faced controversy and national attention for lying about or embellishing details of his background, was spotted by reporters in Congress Tuesday morning.

Santos was walking toward his office in the Longworth House Office Building, accompanied by a staffer, when he stopped and turned the other way once he saw reporters.

He declined to answer most questions, but told ABC News’ Lalee Ibssa he will vote for Kevin McCarthy for speaker.

Santos faced calls for accountability from some Republicans, but not from current Republican House leadership. He has said he will serve out his term in the House.

New members of the House will not be sworn in until a speaker is elected.

As Republicans met behind closed doors ahead of the speaker vote, it appeared Kevin McCarthy still did not have the votes needed to be elected.

Sources close to the Republican leader say he’s ready to battle it out. It could go into multiple rounds of votes — something that hasn’t happened in 100 years — and the floor fight could drag on for hours, if not days. The longest battle for speaker was in 1856, and it took two months and 133 votes to resolve.

Rep. Matt Gaetz, who opposes McCarthy’s bid, has warned, “We may see the cherry blossoms bloom in Washington, D.C. before a speaker is elected.”

All of this overshadows the start of the new Congress where Republicans have a majority in the House for the first time since 2018.

Rep. McCarthy has arrived for a closed-door meeting with his fellow Republicans.

“We are going to have a good day today,” McCarthy said as he walked by reporters, who asked if he had the votes for speaker.

The California congressman then laughed as a reporter asked if he’d support Rep. Steve Scalise for speaker should he fail to get enough votes.

Hours before the vote to elect a new House speaker, a sign has appeared in front of the speaker’s office with the message: “Follow Kevin McCarthy.”

McCarthy was set to shore up more support for his speaker bid in a closed-door meeting with the Republican caucus this morning. He faces opposition from a group of hard-line conservatives, who could sink what is his second attempt to hold the gavel.

The California congressman’s belongings have been brought into the speaker’s suite, but if he doesn’t get enough votes, he’ll have to move out.

The House Republican conference will meet behind closed doors at 9:30 a.m., just hours before the speaker vote begins at noon.

While McCarthy might be able to garner more support in a last-ditch appeal, his detractors have boasted that they’ll be able to muster the necessary opposition to block his bid.

“In his 14 years in Republican Leadership, McCarthy has repeatedly failed to demonstrate any desire to meaningfully change the status quo in Washington,” Perry said.

Kevin McCarthy began his career as a staffer to then-Rep. Bill Thomas before chairing the California Young Republicans and later the Young Republican National Federation.

He was first elected to office in 2002, serving in the California state Assembly until 2007, when was elected to the U.S. House of Representatives. At the time, he was dubbed one of the “young guns” of the next generation of conservative leadership.

McCarthy tried to become speaker in 2015 but his chance evaporated after resistance from the same kind of conservatives who are trying to block his path Tuesday. When Democrats took control of the House in 2018, McCarthy was elected House minority leader.

Rep. Kevin McCarthy’s bid to become the next speaker of the House is still clouded in uncertainty as lawmakers head to Capitol Hill for the first day of the 118th Congress.

McCarthy and his staffers spent the day Monday setting up the speaker’s office but he may have to move his belongings out if he fails to clinch the votes needed to secure the position.

Rep. Marjorie Taylor Greene, a McCarthy supporter, told ABC News Congressional Correspondent Rachel Scott, “the problem is the people need to realize the art of the deal. They are all Trump supporters, and you can’t be successful if you’re not willing to take the wins when you get them” when asked about those in her party who are trying to tank McCarthy’s bid.

Rep. Jim Jordan, whose name has been floated around as a potential speaker candidate, said he believes McCarthy “can get there.”

McCarthy, however, didn’t directly answer reporter’s questions about how the vote could go, telling them, “I hope you all have a very nice New Year’s” as he exited the Capitol on Monday night.