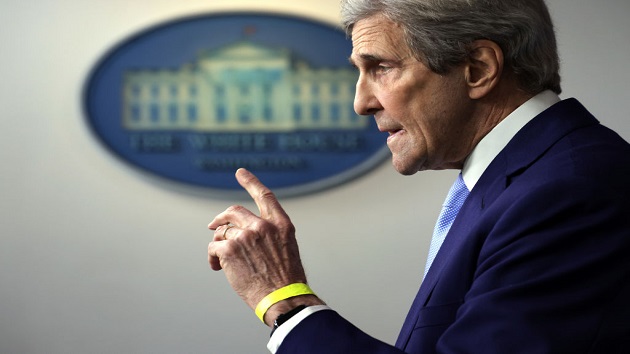 (WASHINGTON) — Financial disclosures released by former Secretary of State John Kerry indicate that until March of this year he held hundreds of thousands of dollars of investments in energy-related companies that may end up being affected by policies he’ll help shape as President Joe Biden’s new climate envoy.

An ABC News analysis of his assets show that in recent years, Kerry held stakes in at least three dozen companies related to the energy industry, including firms dealing in electric, oil and gas, and nuclear energy, with shares worth between $204,000 and $960,000. Kerry had also recently held high-ranking positions within firms and entities that could end up being regulated by his climate action policies, filings show.

A certificate of divestiture issued by the Office of Government Ethics on March 8 shows Kerry’s plan to divest from companies that could pose a conflict of interest for his new role as U.S. Special Presidential Envoy for Climate, a common measure that newly appointed public officials take to ensure their government duties don’t overlap with their personal interests. New filings obtained by ABC News show that on March 11, he divested between $4 million and $15 million in assets from more than 400 companies, including those energy-sector interests.

“The State Department’s Ethics Office reviewed Special Presidential Envoy Kerry’s assets and investments upon his appointment to identify holdings that could pose a significant risk of a conflict of interest,” a State Department spokesperson wrote in a statement to ABC News. “Special Presidential Envoy Kerry agreed to divest the assets identified by the Ethics Office and has done so.”

Ethics and good-government advocates have warned that even past ties and financial interests may create the appearance of impropriety in an industry that’s so highly regulated by federal guidelines. But experts say divesting from those interests helps mitigate or resolve concerns about conflicts of interests that may arise.

“Conflicts arise when someone acts in a way that affects their financial interest; divesting removes the financial interest part of the equation,” said Delaney Marsco, senior legal counsel of ethics at the Washington-based good government group Campaign Legal Center.

Marsco said it’s not unusual for concerns to arise when a public servant has complex financial holdings, and that Kerry “should be recusing anytime even the appearance of a conflict arises” and “should be constantly consulting with ethics officials when he thinks there could be an issue.”

“He should also be mindful of all the ethics rules that may apply to any former client he may have from his previous work,” Marsco said. Kerry’s disclosure report shows that he served as the chairman of the advisory board for Climate Finance Partners and as the president of the Vietnam Sustainable Energy Corporation.

Among the energy-related companies in which Kerry and his family had held investments prior to March were multinational hydrocarbon exploration company ConocoPhillips, international petroleum refinery company Valero Energy and major gas and electric utility provider Southern Company.

The latest disclosures show that Kerry has significantly reduced his financial interests in the energy sector over the years. Past disclosure filings from his time in Congress and in the Obama administration show that Kerry had owned millions of dollars’ worth of holdings in the oil and gas industry and in other energy-sector companies.

Beyond his stake in the energy industry — which accounts for only a small fraction of his total net worth — disclosures show that Kerry has a diverse portfolio of income and holdings that make him one of the wealthiest members of Biden’s administration.

The bulk of Kerry’s income from the past year came from Bank of America, where he earned a $5 million salary for his role as chair of its Global Advisory Council.

The disclosures indicate Kerry also took in speaking fees of more than $300,000 from an array of corporations, foundations, and educational institutions across the globe, from Deutsche Bank in Germany to Hong Kong-based investment capital firm CSLA Limited. He also made $125,000 in consulting fees from the Rise Fund, a $2 billion “social impact” investment project founded by musician-turned-activist Bono and philanthropist Jeffrey Skoll.

Kerry also reported earning at least $15 million to $65 million from his other investments in the past year, much of it dividends and capital gains from divesting his financial assets, including big shares in major corporations like Alphabet Inc., Amazon, Facebook, Microsoft, Comcast and Goldman Sachs.

The vast majority of Kerry’s holdings, however, lie in a trust belonging to the family of his spouse, Teresa Heinz — an heir to the Heinz food processing empire. The disclosure form notes that neither Kerry nor Heinz exercise any control over the management of the family trust.

In his filing first signed in late January and last revised on March 8, Kerry reported owning at least $41 million in assets with his family, but his current net worth is unclear due to the substantial reallocation of his assets over the past few months and because government disclosure reports only require officials to report their holdings within general numerical ranges.