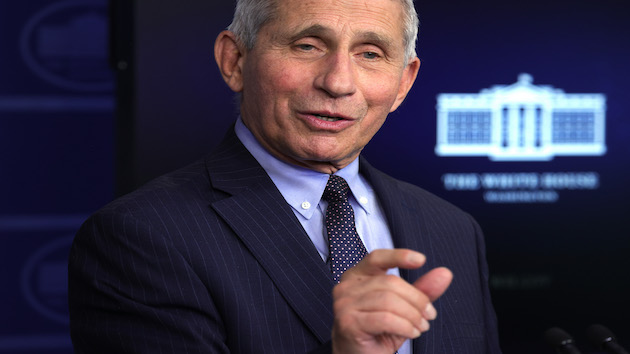 (WASHINGTON) — White House chief medical adviser Dr. Anthony Fauci said Sunday on ABC’s “This Week” that new Centers for Disease Control and Prevention (CDC) guidelines for schools outline “a lot of things” that can be done to protect teachers, adding that vaccinating them is only just “part of it.”

Fauci appeared on “This Week” after the CDC introduced new COVID-19 guidelines for schools that set out a color-coded system based on levels of infection with ranges for how facilities can reopen safely. The guidelines, however, do not require that teachers get vaccinated before their schools reopen.

ABC Chief Anchor George Stephanopoulos questioned the National Institute of Allergy and Infectious Diseases director on the guidelines, asking, “What do you say to teachers who are concerned about going back into the classroom without being vaccinated?”

“There’s a lot of layering to the mitigations, George,” Fauci responded. “And I think the point to make, it’s totally understandable, teachers’ concern. I mean, we appreciate that. The issue is that there are a lot of things that can be done. And they are really delineated pretty clearly in … the guidelines that are coming out that would make the risk less.”

“So, vaccinating teachers are part of it, but it’s not a sine qua non. It’s not something that you can’t open a school unless all the teachers are vaccinated. That would be optimal, if you could do that,” he added. ”When you balance the benefit of getting the children back to school with the fact that the risks are being mitigated if you follow the recommendations and these new guidelines from the CDC, hopefully, I think that will alleviate the concerns on both sides.”

While many leading teachers unions and advocacy groups have praised the new guidelines, several have raised concerns about how the CDC standards are still not being met in many schools in underprivileged communities.

When pressed by Stephanopoulos how confident he was that school districts have the resources they need to reopen safely, Fauci said, “Schools really do need more resources. And that’s the reason why the national relief act that we’re talking about getting passed, we need that. The schools need more resources.”

The CDC guidance comes as new coronavirus variants — particularly strains first observed in the United Kingdom and South Africa — reach the United States, testing the efficacy of new vaccines and the response from the Biden administration. In fact, British government scientists said in a new report Sunday that the U.K. variant is likely more deadly than other strains of the virus.

Although Fauci acknowledged that the U.K. variant has already reached the U.S., he told Stephanopoulos, “The somewhat comforting news is that vaccine that we are now currently distributing, the Moderna vaccine and Pfizer vaccine, clearly work against the (U.K.) variant.”

Despite the efficacy of vaccines on the British variant, the White House chief medical adviser sounded more cautious on the South African strain of the virus. “The data that we got from South Africa is really quite sobering,” Fauci said.

“We do know that it evades the protection from some of the monoclonal antibodies and it diminishes somewhat the capability and the effectiveness of the vaccine to block it,” he added.

With new reports that the first known patient to catch the South African variant after previously contracting COVID-19 is in critical condition, Stephanopoulos pressed Fauci about the risk of reinfection with the new strain.

Still, the White House chief medical adviser said the vaccines do present a degree of efficacy against the South African variant. “Somewhat good news is it looks like the vaccine is better than natural infection in preventing you from getting reinfected with the South Africa isolate,” he said.