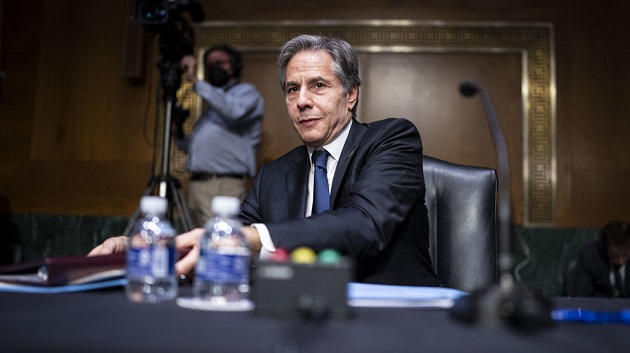 (WASHINGTON) — Speaking publicly about his visit to Ukraine for the first time since returning home, Secretary of State Antony Blinken on Tuesday asserted “the Ukrainians have won the battle for Kyiv,” while calling for additional aid to help the country weather the war as the fighting shifts eastward and to the south.

“As we took the train across the border and rode westward into Ukraine, we saw mile after mile of Ukrainian countryside, territory that just a couple of months ago, the Russian government thought that it could seize in a matter of weeks. Today — firmly Ukraine’s,” he recounted, testifying before the Senate Foreign Relations Committee about his secretive visit to heart of the war-torn country with Secretary of Defense Lloyd Austin.

Blinken said that on the trip, the highest-level visit to Ukraine’s capital by U.S. officials since the invasion, evidence of its military success abounded.

“In Kyiv we saw the signs of a vibrant city coming back to life. People eating outside sitting on benches, strolling. It was right in front of us,” he said. “For all the suffering that they’ve endured, for all the carnage that Russia’s brutal invasion continues to inflict, Ukraine was and will continue to be a free and independent country.”

During the hearing, convened to review the State Department’s budget for the coming fiscal year, Blinken argued that fulfilling the funding requests would prove critical to Ukraine’s defense and curbing Russian aggression.

“I felt some pride in what the United States has done to support the Ukrainian government and its people and an even firmer conviction that we must not let up. Moscow’s war of aggression against Ukraine has underscored the power and purpose of American diplomacy,” he said. “We have to continue to drive that diplomacy forward to seize what I believe are strategic opportunities, as well as address risks presented by Russia’s overreach.”

Blinken argued support from the U.S. and its allies had already played a decisive role.

“[The Ukrainian people’s] success is primarily because of their incredible courage and determination, but it’s also because we were able to equip them with what they needed,” Blinken said. “For every tank that the Russians have had in Ukraine, we’ve managed with 30 allies and partners, in one way or another, to provide about 10 anti-armor systems. For every plane that the Russians have flown in the skies, there have been about 10 anti-aircraft munitions of one kind or another.”

But Blinken acknowledged that as the battleground shifted to other regions of the country, the Ukrainians’ strategy needed to evolve well.

The secretary said while in Kyiv, he discussed what assistance Ukraine required for the next phase of the fighting with its President Zelensky and top military leader.

“I think we’re largely aligned in what they say they need and what we think we’re able to provide,” he said.

While the committee largely projected bipartisan support for Ukraine, the most contentious round of the hearing came during Sen. Rand Paul’s line of questioning on what he called the “reasons” behind Russia’s invasion of Ukraine.

Paul, a Republican more aligned with former President Donald Trump’s “America First” stance than the other members of his party on the committee, blamed the attack in part on President Joe Biden’s and other officials’ public support for Ukraine’s eventual NATO membership.

“Russia said it was a red line,” Paul stated. “Had they been, or are they to become part of NATO, that means U.S. troops will be fighting in Ukraine and that’s something I very much oppose.”

“My judgment is different,” Blinken countered, pointing out the countries Russia had targeted — like Georgia, Moldova, and Ukraine — were not part of NATO.

“You could also argue the countries they’ve attacked were part of Russia … well, we’re part of the Soviet Union,” Paul replied.

“That does not give Russia the right to attack them,” Blinken responded. “It is the fundamental right of these countries to decide their own future and their own destiny.”

Blinken also said that in the eyes of the department, the alliance was not Russian President Vladimir Putin’s chief concern ahead of the attack.

“This was never about Ukraine being potentially part of NATO,” he said. “It was always about his belief that Ukraine does not deserve to be a sovereign independent country that it must be re reassumed into Russia in one form or another.”

Blinken was also pressed on the State Department’s relatively slow-moving approach to repopulating the U.S. embassy in Kyiv after it was temporarily relocated in February, a step many of its allies have already taken.

“We are sending diplomats back to Ukraine this week, and they will begin to assess how we can most effectively and securely reopen the embassy in Kyiv. I anticipate that we will be in Lviv and then and then head to head to Kyiv, subject to the President’s final decision on that,” he said. “We want to have our embassy reopened and we’re working to do that.”