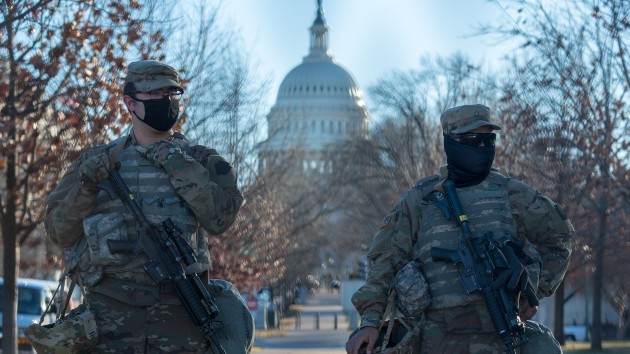 (WASHINGTON) — National Guard troops are returning home this week after deploying to the nation’s capital for nearly five months to safeguard the U.S. Capitol complex in the wake of the deadly insurrection there.

But with security threats after Jan. 6 still a heightened concern, lawmakers are arguing about how to address ongoing security matters and whether a quick reaction force is needed in the future.

House Speaker Nancy Pelosi thanked a group of troops from the speaker’s balcony on Monday and called on the Senate to act on a supplemental funding bill to help secure the Capitol, as well as pass a bill that would set up the Jan. 6 commission to investigate the attack.

“It is imperative that Congress continues to take action to honor the sacrifice of law enforcement and to protect the Capitol,” Pelosi said in a statement. “There is no time to waste or room for partisanship in keeping our Capitol and Country safe.”

Retired Lt. Gen. Russel Honore oversaw a security review of the Jan. 6 attack and recommended a military quick reaction force be established to assist Capitol Police in crisis situations. He said over the weekend that if there was such a force on Jan. 6 the outcome “could have been totally different.”

“The longer they think, the less secure the Capitol will be,” Honore said on CBS’ Face the Nation Sunday, when he was asked about the funding bill’s urgency.

The House of Representatives on Thursday narrowly passed a $1.9 billion Capitol-security funding bill to address costs from Jan. 6. Roughly half a billion would cover expenses from having the National Guard for the extended period. Another $200 million would create a standing force in the D.C. National Guard to assist Capitol police in crisis response — sparking opposition from Republicans and progressive Democrats.

Every House Republican voted no on the bill, arguing it costs too much money or wasn’t appropriate or necessary, while Reps. Alexandria Ocasio-Cortez, Rashida Tlaib, Ilhan Omar, Ayanna Pressley, Jamaal Bowman and Cori Bush all voiced some sort of opposition in line with “defund the police” messaging.

Though their reasons differed, the outcome was all the same.

“We cannot support this increased funding while many of our communities continue to face police brutality while marching in the streets, and while questions about the disparate response between insurrectionists and those protesting in defense of Black lives go unanswered,” Omar, Pressley and Bush, who all voted “no,” said in a joint statement.

While the fate of the supplemental funding and a possible commission looking into Jan. 6 hangs in the balance, Senate Minority Leader Mitch McConnell didn’t make his position any clearer on Monday.

In floor remarks, McConnell gave his warm thanks to the troops departing Monday and warned that “Congress will continue to discuss and debate whether it is appropriate for uniformed military personnel to play an ongoing role in policing the United States Capitol,” before turning to legislation at hand.

If the Senate remains stuck on the bill it’s currently considering, which is aimed at bolstering U.S. competitiveness with China, Democrats won’t get a vote on the Jan. 6 commission before the weeklong Memorial Day recess, as they have been hoping for.

McConnell announced last week that he intends to oppose a bill that would create a Jan. 6 commission — a reversal from a day earlier when he told reporters he was undecided on the plan. Pelosi has criticized Republican opposition as them being “afraid of the truth.”

With the departure of Guard troops, the Capitol Police — which has seen a full change in leadership since the attack — will take back the full responsibility of safeguarding the complex.

“These airmen and soldiers protected not only the grounds, but the lawmakers working on those grounds, ensuring the people’s business could continue unabated,” Austin said in a statement.

The departure was planned as the Pentagon announced last week that an extension for the 2,149 Guard troops in the district had not been requested. Nearly 26,000 troops deployed to the area in the weeks following the Jan. 6 attack and leading up to Biden’s inauguration.

A National Guard official in Washington told ABC News on Monday there are roughly 1,500 Guardsmen still in the district. They’ll be doing out-processing at the D.C. Armory and heading home in groups over the next two days.

“It was an honor and privilege to serve and protect the communities in the National Capital Region,” the National Guard said in a statement.

The decision to keep troops for nearly five months after the attack reflects concerns about the ongoing threat of violence at the Capitol. Just last month a man rammed a vehicle into the Capitol barricade leaving one Capitol Police officer dead and another officer injured.

But the deployment of the Guard has seen controversy from the start. Members were briefly forced to take breaks in a nearby parking garage, sparking outrage from lawmakers and within the newly minted Biden administration. While their presence has become a Capitol Hill staple, Republicans have expressed concern with the financial cost.

District of Columbia Mayor Muriel Bowser told reporters on Monday she was supportive of the planned troop reduction — and that she is ready to see the Capitol barricades come down too, though that timeline is unclear.

“We’re also actively engaged in a larger conversation about coordination among federal parties and the protection of federal facilities including the Capitol,” she said. “So I am pleased to see our National Guardsmen start to cycle off and will be even more pleased to see some of the other harder parts of the perimeter removed or softened as well.”