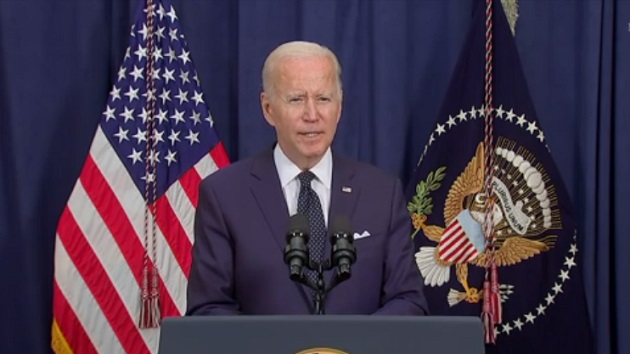 (WASHINGTON) — Connecticut Sen. Chris Murphy on Sunday called for a change in Washington’s ties to Saudi Arabia after the country and other members of the OPEC+ alliance decided to significantly cut production later this year in a move that will likely drive up the slumping cost of crude oil.

Speaking on CNN’s “State of the Union,” Murphy added to the growing number of Democrats arguing that the U.S. should, as he put it, “rethink” the relationship with the Gulf kingdom in light of the announced 2-million-barrel-per-day cut in oil production as well as Riyadh’s human rights record.

The forthcoming restrictions by OPEC+, which will begin in November, come after President Joe Biden traveled to Saudi Arabia this summer seeking, in part, to lower domestic gas prices before the midterms.

But OPEC+ said the cuts announced last week were necessary to help support the international price for oil. The global market has been roiled by Russia’s invasion of Ukraine, the effects of the COVID-19 pandemic and other forces.

“We are here to stay as a moderating force, to bring about stability,” a Saudi minister said Wednesday. The cuts, the minister insisted, were not about “belligerence.”

Biden told ABC News on Thursday he was unhappy with the move. And while he maintained that the trip was not essentially for oil. … It is a disappointment and it says that there are problems.”

On CNN on Sunday, Murphy said that “it’s clear that we didn’t get as much as we needed to.”

“We wanted to know that when the chips were down, when there was a global crisis, that the Saudis would choose us instead of Russia. Well — they didn’t. They chose Russia. They chose to back up the Russians, drive up oil prices, which could have the potential to fracture our Ukraine coalition. And there’s got to be consequences for that,” Murphy said.

Beyond rethinking the U.S. relationship with Saudi Arabia, Murphy also focused on Crown Prince Mohammed bin Salman, the country’s de facto ruler, whom Biden met with in July in negotiations that drew scrutiny given that U.S. intelligence has assessed bin Salman approved the killing of U.S.-based journalist Jamal Khashoggi in the Saudi consulate in Istanbul.

The prince has continued to claim he was not involved, though Biden said he raised the issue at their meeting this summer.

Hatice Cengiz, Khashoggi’s fiancée, sharply criticized Biden’s “heartbreaking” decision to travel to Saudi Arabia. While running for president in 2019, Biden said he would make the country a “pariah.”

Murphy’s comments on Sunday follow similar calls from other Democrats last week for some kind of punishment after the oil production cut. A trio of House Democrats introduced a bill to remove the U.S. military presence from Saudi Arabia.

“Many argued that we had to ‘repair’ our relationship with our Gulf partners to win their cooperation in stabilizing global energy markets following Russia’s invasion, and President Biden made every effort to do so, going so far as to meet the Saudi Crown Prince personally in Riyadh, despite his role in the murder of Jamal Khashoggi,” Reps. Sean Casten of Illinois, Tom Malinowski of New Jersey and Pennsylvania’s Susan Wild said in a joint statement last week.

“It is time for the United States to resume acting like the superpower in our relationship with our client states in the Gulf. They have made a choice and should live with the consequences. Our troops and military equipment are needed elsewhere,” the trio said.

The White House, while disagreeing with the production cuts, is remaining tight-lipped about how it plans to respond to OPEC+, which is unofficially led by Riyadh.

“We will be assessing and consulting closely with Congress around a range of issues on the back end of this,” Brian Deese, a top economic adviser to Biden, told reporters on Thursday. “And beyond that, I don’t want to get ahead of potential announcements by the administration.”