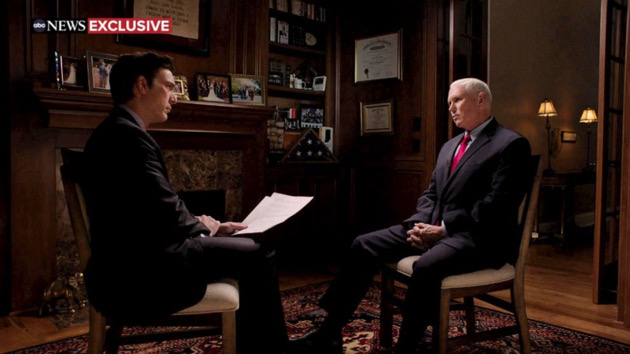 (CARMEL, Ind.) — Former Vice President Mike Pence said in an exclusive interview with ABC’s World News Tonight anchor David Muir that while he was working to connect with military and law enforcement officials during the Jan. 6 riot, he couldn’t speak to then-President Donald Trump’s apparent inaction.

“David, I was at the Capitol. I wasn’t at the White House,” Pence told Muir. “I can’t account for what the president was doing that day. I was at a loading dock in the Capitol where a riot was taking place.”

Muir pressed Pence on reports that Trump was watching the riot unfold on television at the White House.

“But why wasn’t he making these calls?” Muir pressed.

Pence responded: “That’d be a good question for him.”

In an exclusive interview at the former vice president’s home in Indiana, Muir also pressed Pence on whether Trump should ever be in the White House again, whether Pence will run for president, whether Trump hurt Republicans in the midterms, and what Pence makes of authorities saying classified documents were taken from the White House.

Trump, who has insisted he did nothing wrong, ultimately told the rioters to leave but only after berating Pence for not blocking the certification — which Pence noted he couldn’t legally do — and repeating baseless conspiracy theories about widespread fraud in the 2020 election.