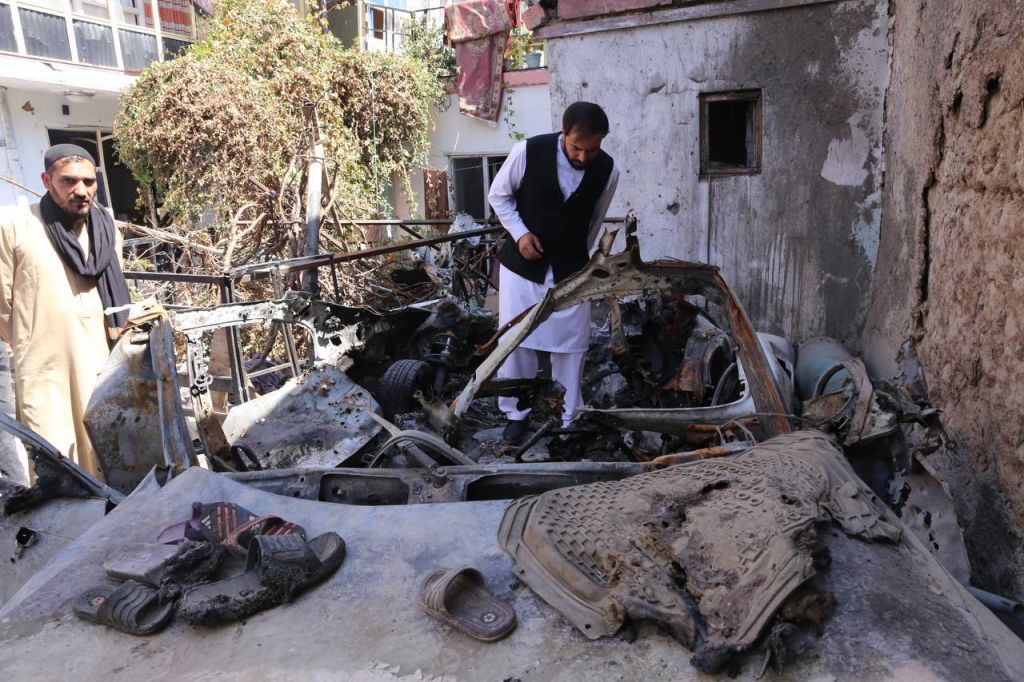 (WASHINGTON) — One year after a deadly U.S. drone strike in Kabul killed 10 civilians, including seven children, 133 family members and co-workers of the Afghan aid worker mistakenly targeted remain outside of the United States despite an American commitment they would be brought to the U.S.

According to ACLU attorney Brett Max Kaufman who represents the family of Zemari Ahmadi, the aid worker whose vehicle was mistakenly targeted as being that of a potential car bomber, only 11 of the 144 people the U.S. promised to help are in the United States.

One hundred and one are in third countries awaiting security reviews and the processing of immigration visas while the remaining 32 face an uncertain future in Afghanistan where it remains unclear if the Taliban will allow them to leave the country following the recent airstrike in Kabul that killed al Qaeda’s top leader Ayman Al Zawahiri.

The arrival of the 11 Afghans to the United States is a recent development as they only arrived in May and July.

“It’s been a year since a U.S. drone strike in Kabul wrongly targeted Zemari and wrecked countless innocent lives, said Kaufman in a statement issued on Monday’s one year anniversary of the deadly drone strike. “Unfortunately, the government still hasn’t made good on its promises to evacuate our clients, let alone resettle them in the U.S. “

“We’re grateful for what the government has done to bring many of Zemari’s loved ones to safety, but for those who remain, the situation is getting more desperate by the day” he added. “After the strike, the U.S. government made a rare promise to make amends for the dire consequences of their ‘mistake’ and it would be a tremendous institutional failure if the government failed to follow through. The government needs to urgently act before it’s too late.”

“On the one-year anniversary of the strike, I’m hoping my government will finally keep its promise and quickly evacuate all the survivors and their families, ” said Dr. Steven Kwon, the founder and president of Nutrition and Education International, the aid agency for whom Ahamadi had worked.

On August 29, 2021 U.S. forces in Afghanistan were on edge following the August 27 suicide bomb attack at the gates of the airport in Kabul that killed 13 American service members and dozens of Afghan civilians who had hoped to gain entry into the airport to leave Afghanistan as part of the U.S. military evacuation after the Taliban took control of the capital city.

Intelligence indicated that the terror group known as ISIS-K was planning a car bomb attack targeting the airport.

When U.S. military overhead drones spotted a suspiciously circuitous route by a white Toyota that had left the vicinity of what was believed to be an ISIS-K safehouse U.S. military officials called a preemptive drone strike on what they had concluded was the vehicle to be used in the possible attack.

The U.S. military defended the validity of the the strike even after reporters in Kabul began to piece together that the strike may have mistakenly targeted Ahmadi and several civilians , including children, as his car pulled into the courtyard of his home.

But two weeks later, Gen. Frank McKenzie, the head of U.S. Central Command, acknowledged that the drone strike had been “a tragic mistake” after a military investigation concluded that 10 civilians, including seven children, had been killed in the drone strike. Kwon identified the civilian casualties as Ahmadi, his three sons, and six nieces and nephews.

In December, Defense Secretary Lloyd Austin agreed with military commanders that no one should be punished for the mistaken drone strike that was attributed to “a breakdown in process.”

In the wake of the drone strike, the Pentagon announced that it would be providing assistance for Ahmadi’s family to be taken out of Afghanistan and that they would also received condolence payments.

Ultimately 144 individuals, about two thirds of whom are Ahamadi’s immediate family and extended family were identified to leave Afghanistan according to Kaufman. The remainder were Ahmadi’s co-workers and their families.

“The Department of Defense, in coordination with other U.S. government departments and agencies, continues to take steps to respond to the Aug. 29, 2021, airstrike in Kabul, Afghanistan,” according to Todd Breasseale, the Pentagon’s deputy press secretary, said in a statement provided to ABC News. “To protect the privacy of the family members, as well as to help protect their safety and security, we are not able to provide more information regarding these efforts at this time.”

The status of the condolence payments to family members remains unclear though Kaufman told ABC News that the focus is on evacuating the individuals stuck in Afghanistan.

“Everyone involved has prioritized the safe evacuation of our full group before moving on to discuss any compensation or ex gratia payments,” said Kaufman.

“We’re all very disappointed that a year out from the strike we still have clients who are stuck in Afghanistan, and we think it is critical that the government follow through on its commitments to compensate the victims of the strike, but for the moment we’ll continue to focus the bulk of our resources on getting the remainder of our group out safely. “

Last week, the Pentagon announced new procedures intended to prevent civilian casualties in U.S. military operations under a plan ordered by Austin that was a direct result of last year’s Kabul drone strike and a high profile incident in Syria that resulted in significant casualties.

Over the next year the Pentagon will set up a new Civilian Protection Center of Excellence that it hopes will better education and training, and increased screening before strikes are launched.

The Kabul strike seemed to show that there was “confirmation bias” during the tracking of Ahmadi’s vehicle and the decision to carry out the drone strike.

The new Pentagon effort will try to prevent that in the future by sending teams to regional military commands, the services, and the DIA that will be tasked with challenging such assumptions to ensure that a drone strike is appropriate.

Also, a new reporting system will be put into place to more accurately report a civilian casualty and the DOD will formalize the process for acknowledging casualties and any subsequent condolence payments or assistance that will be provided afterward.