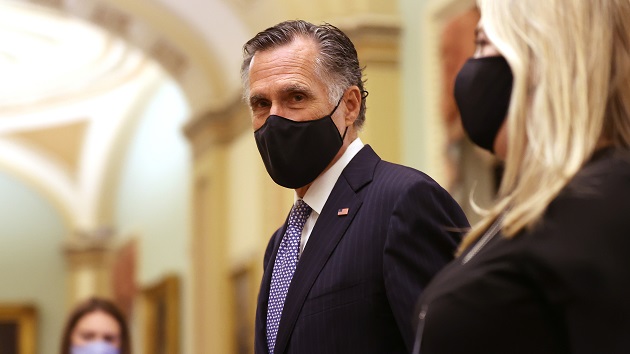 (WASHINGTON) — Sen. Mitt Romney did not know the identity of the Capitol Police officer who led him away from rioters until a clip of the harrowing moment was played during the second day of former President Donald Trump’s impeachment trial.

When the Utah senator learned that the officer was Eugene Goodman — hailed a hero for leading the mob away from the entrance to the Senate floor on Jan. 6 — Romney thanked the officer for keeping him out of harm’s way.

JUST IN: House impeachment managers play security footage of Officer Eugene Goodman, who "passes Sen. Mitt Romney and directs him to turn around in order to get to safety."

"On the first floor, just beneath them, the mob had already started to search for the Senate chamber." pic.twitter.com/wuyZLxhgtX

Goodman told Romney that when the insurrection was taking place, he had been exhausted and nauseated from going from one part of the building to the other, up and down multiple flights of stairs and through clouds of bear spray and tear gas.

Romney said that before the barricades on Capitol Hill were breached, his bodyguard warned him via text message of the violent crowd outside. After Romney received another text stating the mob had gotten inside, he headed to his hideaway, located on the second floor toward the House chamber, he said.

When Romney got into the hall no one was there, including his bodyguard, he said.

“But Officer Goodman came and saw me and he said, ‘Go back in. It’s not safe here. Go back in and you’ll be safer in the chamber,"” Romney said.

During the trial, Romney said that he did not realize he was so close to the rioters when he ventured into the hallway and that he didn’t know it was Goodman who directed him to safety.

“I was very fortunate indeed that Officer Goodman was there to get me in the right direction,” Romney said.

Goodman has been praised for his actions on the day of the Capitol siege. The Army veteran was quietly awarded the Distinguished Public Service Award by both the secretary and chief of staff of the Army.

HERO OFFICER: @DavidMuir reports on Capitol Police Officer Eugene Goodman, the Army veteran seen redirecting a Trump mob during the riots away from the Senate chamber – with lawmakers now introducing a bill to honor his bravery. #AmericaStrong https://t.co/eUC4mPKTF4 pic.twitter.com/b1jFlbTEPe

Three members of Congress introduced a bill to honor Goodman with the Congressional Gold Medal “for his bravery and quick thinking.”

Goodman also was made an honorary deputy sergeant at arms when he escorted Vice President Kamala Harris and her husband, second gentleman Doug Emhoff, into Joe Biden’s presidential inauguration ceremony on Jan. 20.