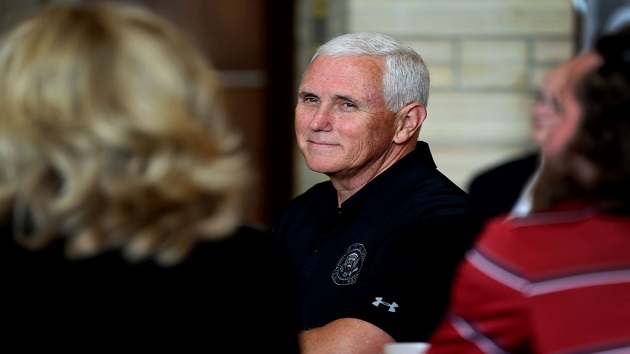 (WAVERLY, Iowa) — Former Vice President Mike Pence continued to make his way through Iowa on Saturday, further fueling speculation he could be considering a 2024 presidential run.

Pence spoke at the Bremer County GOP Annual Summer Chill and Grill to advocate for Republican candidates on the ballot in November.

“In these 80 days, we need to remind the American people that we can have a strong nation, we can have secure borders, we can have a prosperous economy, we can defend all the God given liberties enshrined in our Constitution, but it will take Republican leadership at every level to do it,” Pence said in his speech.

His stop in Waverly, Iowa, comes after he spent the day at the Iowa State Fair on Friday, where he downplayed that his visit, known for bringing out presidential hopefuls, had anything to do with his 2024 ambitions.

“I’m in Iowa for one reason and one reason only, and that is that Iowa and America needs six more years of Senator Chuck Grassley,” he said.

Pence joined Grassley and other GOP leaders at the fair, running through thunderstorms and making stops at booths for the Iowa GOP and Iowa Pork Producers.

Pence didn’t completely shut the door on a presidential run, saying he would consider throwing his hat in the ring in the new year.

Pence’s role on Jan. 6 once again took the spotlight after he indicated this week he would consider testifying if the committee were to present a formal invitation.

“If they present a formal invitation for the committee, I’ve said we’ll give it due consideration, but we’ll do so reflecting on the unique responsibilities that I have to defend the prerogatives of my office as Vice President,” he said.

“While I’m disappointed with the partisan nature of the committee, if a formal invitation were presented to us, our attorneys have been clear that we will first review my unique role as Vice President of the United States. Under the Constitution, we have a separation of powers,” he said. “No vice president in American history has ever been summoned to Capitol Hill to testify before the Congress.”

“I’m deeply troubled that the FBI conducted a search warrant in the home of a former president of the United States of America,” Pence said.

But Pence also criticized people within his party for attacking law enforcement officials.

“The Republican Party is the party of law and order. Republicans stand with the men and women who serve in law enforcement at every level: local, state, and federal level. And as I said this week, I think the calls to defund the FBI are just as wrong as calls to defund the Police,” Pence said.

Since the search, the FBI has issued numerous warnings about increased threats against law enforcement.

“We can hold the Attorney General and the Justice Department accountable, we can demand that they reveal why the search warrant was executed against the residence of a former president of the United States without demeaning the rank and file men and women of the FBI,” Pence cautioned.

Earlier Friday, Pence attended the Grassley Committee Fundraiser and after the fair he served as the special guest at the Iowa Faith & Freedom Coalition.