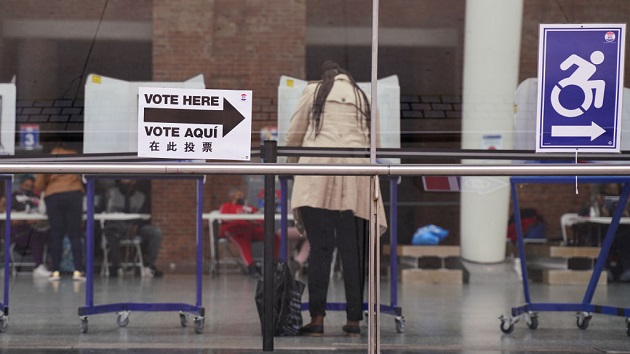 (WASHINGTON) — The 2022 campaign is shaping up to be a historic, decisive moment in American politics.

From our reporters across the country, ABC News brings you all the latest on what the candidates are saying and doing — and what voters want to happen in November’s midterm elections.

For more from ABC News’ team of reporters embedded in battleground states, watch “Power Trip: Those Seeking Power and Those Who Chase Them” on Hulu , with new episodes on Sunday.

Here is the latest from the campaign trail. All times Eastern.

Rep. Liz Cheney, who was ousted from office this year in Wyoming after voting to impeach former President Donald Trump, has endorsed Rep. Tim Ryan in his senate bid in Ohio, the latest Democrat to garner Cheney’s endorsement, the first being Rep. Elissa Slotkin, whom the Wyoming representative is planning to stump for at a campaign event later this evening in Lansing, Michigan.

Cheney said during an appearance at Cleveland State University today that members of her party should reject Ryan’s opponent J.D. Vance and other candidates who support Trump’s unproven claims about voter fraud during the 2020 presidential election.

When asked by PBS Newshour anchor Judy Woodruff whether Cheney would run for president on 2024, she didn’t deny she was considering it.

“I think the most important question is whether we as a nation are going to do what we have to do to preserve the republic,” said Cheney.

“That’s really what I’m focused on.”

The two-term incumbent Democrat is locked in a tight rematch race against Republican Bryan Maryott.

Biden’s trip comes as the Democratic Congressional Campaign Committee announced its final round of “Red Alert” candidates — or Democratic incumbents and candidates who need “immediate resources.”

Levin defeated Republican Diane Harkey by more than 13 points in 2018, and then by 7 points against Maryott in 2020. The district has now turned slightly more Republican through redistricting.

Arizona’s Libertarian Senate candidate Marc Victor dropped out of the race on Tuesday, putting his support behind Blake Masters, the Republican nominee.

His move, made a week ahead of Election Day, gives Trump-backed Masters a further boost as Victor’s candidacy was forecasted to split off some of the Republican vote in the race to unseat incumbent Democrat Sen. Mark Kelly.

Victor told ABC News in a written statement Tuesday that Blake Masters approached him, agreeing to the Libertarian’s offer to both his opponents on “why it was in the interests of freedom, peace, and civility for me to step down and endorse either of them.” Their taped conversation “impressed” the Libertarian, Victor said, prompting him to drop out.

“I publicly offered to meet with either Mark Kelly or Blake Masters to have an unscripted discussion about why it was in the interests of freedom, peace, and civility for me to step down and endorse either of them,” Victor told ABC News.

“Blake Masters availed himself of that opportunity yesterday, and we had a public conversation where I asked him whatever I wanted. I was impressed with Blake Masters and his commitment to being a Live and Let Live Senator from Arizona,” Victor told ABC.

In the [,]() Victor said this decision to drop out one week before Election Day will make some people “very upset” and others “very happy.”

Masters responded to the new support in a campaign press release.

“Marc Victor joins a growing list of Arizonans from across the political spectrum who are fed up with open borders, big government corruption, and rising crime. We are building a broad coalition to defeat the worst Senator in America. This is another major boost of momentum as we consolidate our support against the extreme and radical policies of Mark Kelly and Joe Biden. Live and Let Live,” Masters said.

Victor will still be on the ballot, but any votes cast for him will not be tabulated, according to a spokesperson at the secretary of state’s office.