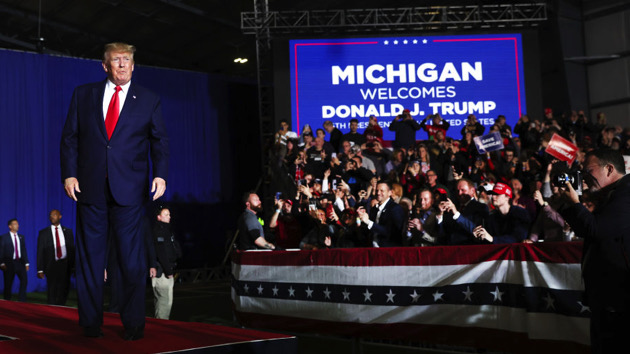 (GRAND RAPIDS, Mich.) — Thousands of Michigan GOP leaders are gathering in Grand Rapids on Saturday to decide which candidates will make it onto November’s ballot in what will be a major test of former President Donald Trump’s hold over the state party.

Trump has made his presence known in the state, endorsing candidates up and down the ballot, mainly focusing on whether or not they believe his baseless claim that the 2020 election was stolen.

In two of the most closely watched races of the weekend, Trump has endorsed Kristina Karamo for secretary of state and Matt DePerno for attorney general. Both have become sounding boards for his unfounded election claims.

DePerno, a lawyer, filed suit seeking to audit the 2020 election results in Antrim County; however, those efforts were dismissed by a Michigan court Thursday. Karamo was part of the Supreme Court lawsuit that was eventually rejected seeking to overturn the 2020 results after claiming she personally witnessed election fraud in Detroit.

“It’s true that any past party president, you know, would be a very influential endorsement,” Matt Grossmann, a political science professor at Michigan State University, told ABC News. “What is not routine at all is that the president is making a decision on the basis of people’s views of whether the last election was stolen or not.”

In Michigan, party delegates nominate candidates for most statewide offices at party conventions rather than holding primaries. The party will formally nominate those candidates in August.

This is the earliest Michigan Republicans have ever held the convention as the party looks to maximize its chances of flipping seats in the battleground state. Trump lost Michigan in 2020 by about 150,000 votes.

“These candidates need the time really to make the case as to why you should be elected,” Gustavo Portela, communications director for the Michigan Republican Party, told ABC News. “It also gives the party an opportunity to back them financially.”

The former president’s particular focus on the state sets up a showdown between the two Trump-endorsed candidates and their opponents this weekend. Trump has also endorsed 10 candidates for seats in the state legislature.

Some in the party have signaled they want to shift away from focusing on 2020. On April 11, Michigan counties held conventions to choose the delegates who will represent them at this week’s state convention. In Macomb County, people were seen on video shouting over each other and trading insults. The night ended with a vote removing the county party chairman and staunch supporter of the former president, Mark Forton.

Amid the infighting among the two wings of the party, Portela says Saturday’s decision will ultimately be determined by who has the best chances of winning in the midterms.

“I understand the president is always going to be involved, but ultimately it comes down to the delegates and what they have to say,” he said.