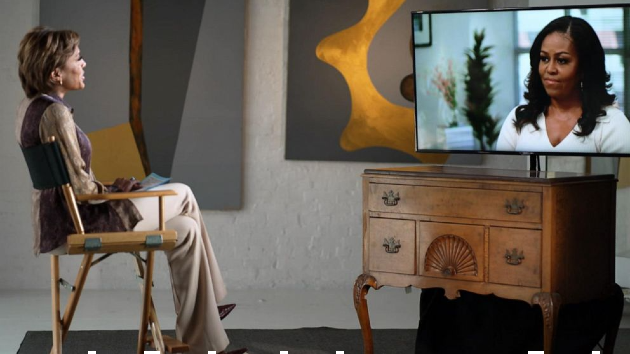 (NEW YORK) — Former first lady Michelle Obama is speaking out for the first time since the inauguration of President Joe Biden, sharing the “reality” that faced guests on the stage as they watched the former vice president be sworn on the same platform where two weeks earlier a mob of angry rioters stormed the U.S. Capitol.

“The mood was wonderful, but it was also mixed,” Obama said in an interview with Robin Roberts that aired Wednesday on ABC News’ Good Morning America. “I think everyone was concerned about more riots, but we were assured that things were under control.”

“When you see fellow Americans storming the Capitol, that, you know, that sits with you, so that reality was with us on that stage,” she said. “But to watch our friend Joe Biden and Jill [Biden] stand there with their beautiful family, to see [Vice President Kamala Harris] and her family standing there, brave and bold, knowing that they were taking on a massive amount of responsibility to get this country back on track.”

Obama said she was “moved almost to tears” at one point in the inauguration, when 22-year-old Amanda Gorman made history as the youngest poet in recent history to perform at a presidential inauguration.

“I was proud and moved almost to tears to hear, not just her words, but the confidence with which she delivered,” said Obama. “I know there are many, many Amanda Gormans. I’m just proud when one of them gets a chance to be seen and the rest of the nation and the world gets to see, yup, a lotta Black folks contribute to this country. A lot of Black folks have made this country what it is today.”

The former first lady’s latest project is focused on spotlighting the voices of young people like Gorman.

On Tuesday, Obama released the Young Reader edition of her best-selling memoir Becoming. The edition, adapted for kids ages 10 and older, features a special introduction by Obama and three photo inserts, according to Penguin Random House, the book’s publisher.

When asked why she finds such joy in working with young people, Obama replied that they “are our hope.”

“They are not jaded yet. They are not beaten down by what they’re supposed to be. They are still wide open,” she said. “That’s the point of ‘Becoming.’ If you are lucky, you will never become something and that’s the end. If you are lucky, you will constantly grow and evolve until the day you cannot breathe anymore, you know? We are all learning and becoming something better and greater.”

Obama said she herself is becoming “more free, and I hope I’m becoming smarter and wiser and more patient.”

The former first lady also said she hopes she is becoming someone “that is comfortable getting out of the way so that the next generation can take the seat that I’m sitting in.”

The “next generation” Obama is referring to is one that has not been afraid to call out injustices and demand change, particularly in the past year that saw protests across the country after the deaths of Black people including George Floyd and Breonna Taylor.

“It feels different,” said Obama, whose nonprofit When We All Vote encouraged young people to get to the polls. “And, you know, what gives me even more hope is what happened at the polls in November. We gotta march, we gotta protest and we have to vote. We have to be educated. We have to be informed.”

“Young people are starting to put those pieces together and understand that, you know, it’s not either or. It’s all of it,” she said, also pointing to Washington insider Vernon Jordan, who died Tuesday at the age of 85, as an example for young people of someone doing it all.

“It’s just a reminder that we’ve got to continue to fill those seats, not just in politics, but Vernon was a powerhouse in business. He worked in civil rights. He did it all,” she said. “And that’s the thing I want young people to know. There are many ways to make change.”

Obama said she sees the powerful voices of the youth in her own two college-aged daughters, Malia and Sasha.

“I always have wanted them to start practicing the power of their voices very early on,” she said. “Look, if you sit around the dinner table, me and Barack, we can’t get a word in edgewise, and we like it like that. We want to hear their thoughts and their opinions, and that’s where it begins.”