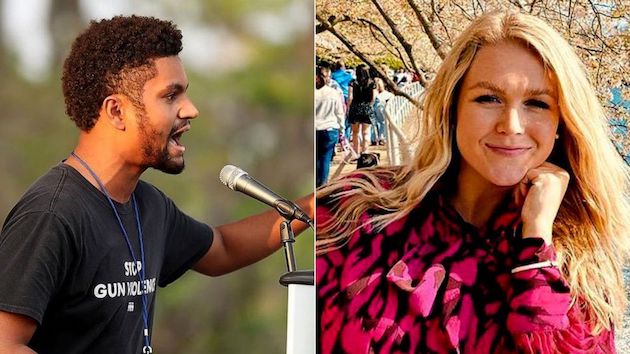 (NEW YORK) — A new generation of politicians is emerging just in time for the midterms.

This election cycle marks the first time members of Generation Z, those born after 1996, are eligible to run for seats in the House of Representatives, where legislators must be 25 years old by the time they’re sworn in.

Karoline Leavitt, a Republican from New Hampshire, and Maxwell Frost, a Democrat from Florida, are the two main viable Generation Z candidates running for Congress in the 2022 midterms.

Leavitt turns 25 just a few weeks before the New Hampshire primary in August, and Frost turned 25 earlier this year.

Both candidates have some political experience.

Leavitt worked in the Trump administration as an assistant press secretary. Following that, she served as communication director for the No. 3 Republican in the House, Rep. Elise Stefanik, R-N.Y.

She was raised in New Hampshire and is running in the GOP primary to represent its 1st District, hoping for the chance to go head-to-head against the Democratic incumbent, Rep. Chris Pappas.

“I’m honored to be considered a contender in this primary race to represent my home district and defeat the Democrat, who I obviously feel is not doing a good enough job,” said Leavitt, who has been outspoken about her false belief that Trump won the 2020 election.

Some of Leavitt’s campaign promises include strengthening the Second Amendment, fighting for energy independence, tackling the opioid crisis and advocating for legislation that supports the anti-abortion movement.

“We need young, fresh leadership in Washington on both sides of the aisle,” said Leavitt. “There are politicians that have been [in Washington] literally three times as long as I’ve been alive. This is a serious problem for our country and my generation, [which particularly] lacks young conservative voices.”

Another Gen Z candidate is also running in that crowded race. Tim Baxter, who shares a pro-Trump platform, is struggling to gain traction, however, and had to take out a loan for over $100,000 to continue funding his campaign.

Frost — the Gen Zer running in the Democratic primary for Florida’s 10th Congressional District — was a national organizer for the ACLU and then became the national organizing director of March for Our Lives, a youth-led organization dedicated to ending gun violence.

He’s hoping to fill the open seat of Rep. Val Demmings, who is running for a Senate seat.

Frost said one particular moment cemented his decision to run: being reconnected with his biological mother and having a conversation with her about his birth.

“I hung up the phone and said, I need to run for Congress, not just for myself, but for people like my biological family, my family, friends, and people who live in central Florida.”

Both Leavitt and Frost agree it’s time to elect young people to Congress to represent issues younger voters care about and to give them more of a say in decisions being made now, which will impact young Americans down the line.

The median age of a senator in Congress is 64, while it’s 58 for members of the House. Nearly two-thirds of Congress is over 55, according to Pew Research.

Leavitt believes it’s crucial for the Republican Party to “encourage young conservative leaders when they come along” while Frost said Generation Z faces unique challenges and the country “needs a diversity of opinions, thoughts, experiences and age” in Congress.

When people tell Leavitt to wait her turn, she said her response is, “for who?”

Frost said he’s had similar experiences with people questioning his age and experience. But he tells them something he picked up from a voter, that he’s “just on time” for a congressional bid.