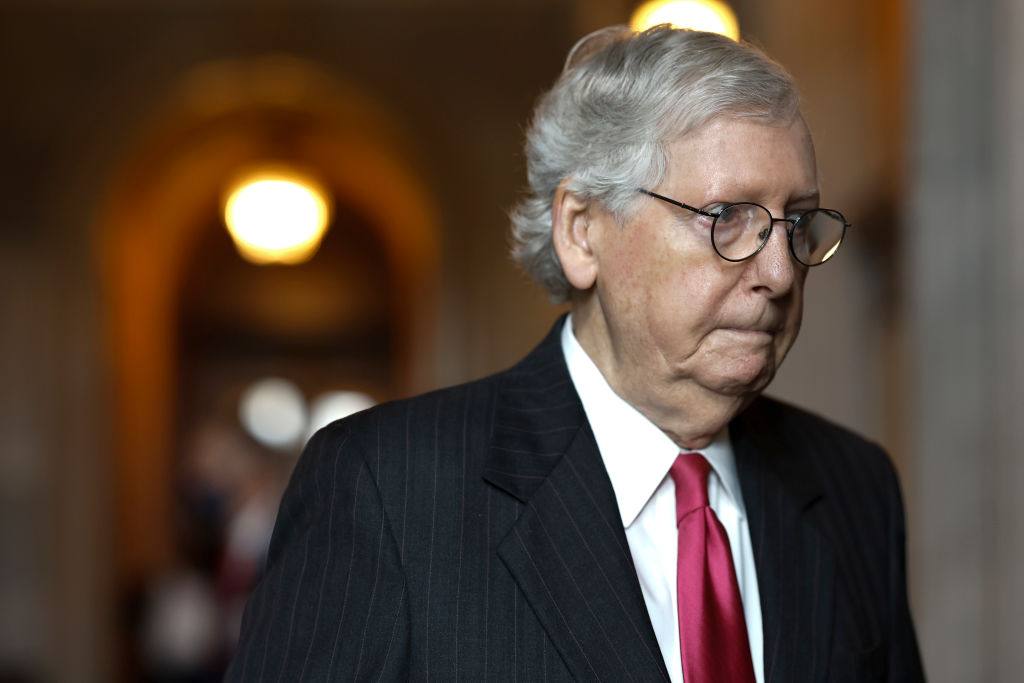 (WASHINGTON) — Senate Minority Leader Mitch McConnell on Friday will host a fundraiser with Senate candidates in key battleground states a week after appearing to criticize the “quality” — of some GOP Senate candidates.

The same source said the event had been organized in June.

Last week, McConnell seemed to suggest that the quality of some GOP candidates could make it more difficult for the party to retake the Senate.

“I think there’s probably a greater likelihood the House flips than the Senate,” McConnell said at a Northern Kentucky Chamber of Commerce luncheon in Florence, Kentucky, last week. “Candidate quality has a lot to do with the outcome.”

The comments fueled more criticism from former President Donald Trump, who once again voiced his disapproval of McConnell, going as far as calling for his removal as the Senate Republican leader.

“Mitch McConnell is not an Opposition Leader, he is a pawn for the Democrats to get whatever they want. He is afraid of them, and will not do what has to be done. A new Republican Leader in the Senate should be picked immediately!” Trump said in a statement Wednesday.

Trump and McConnell have at times been at odds during the midterm election season as Trump continued to assert his powers over the Republican party, endorsing candidates up and down the ballot.

While McConnell and Trump aligned on Senate candidates in Georgia and Nevada, the two are in a standoff in Alaska’s Senate race.

McConnell’s super PAC has backed Sen. Lisa Murkowski, R-Arkansas — who voted to convict Trump during his second impeachment trial — in her reelection bid against Trump-endorsed candidate Kelly Tshibaka. Tshibka has publicly said she would not support McConnell as GOP leader. The two candidates have both advanced to the general election.

After a primary season in which McConnell tried to stay relevantly neutral, he is doubling down on his efforts of ensuring Republicans take back control of Congress.

The Senate Leadership Fund, a super PAC linked to McConnell, announced it is reserving $34.1 million in Pennsylvania, $37 million in Georgia, and $27.6 million in North Carolina to support the Republican nominees.

“The stakes in this election could not be higher. It is imperative that Republicans regain control of the Senate and serve as a firewall against President Biden’s disastrous policies. I am determined to do everything I can to ensure our candidates have the resources they need to win this November,” said McConnell.

The spat between McConnell and the former president have left vulnerable candidates stuck between seeking help from McConnell and his Super PAC as they are being outraised by their Democratic opponents while also maintaining their close ties to Trump, who has endorsed all three candidates attending the fundraiser.

Oz, who is holding a rally with Trump next weekend in Pennsylvania, tried to distance himself from McConnell’s remarks, saying they weren’t about him.

In a Fox Business interview, Oz said McConnell has “expressed himself quite clearly with his pocketbook” and claimed the senator has donated tens of millions of dollars to the ex-television host’s campaign.

“He was highlighting that the quality of candidates does matter a lot in statewide races. It always matters,” Oz said.

“I got in this race to win it. I never got in it to follow Washington around. I said I’m here for the people,” Walker said.

Budd did not respond to ABC News’ request for comment.

Political experts said McConnell’s comments are emblematic of a growing sentiment among a subset of Republicans who are now grappling with a lack of experienced candidates embattled with scandals in a contentious general election cycle.

“I think McConnell is, you know, just upset that, you know, that Trump pushed all these inexperienced and fringe candidates for Senate nominations and I think he was absolutely truthful on saying that this is could very cost Republicans control of the Senate,” Alan Abramowitz, Professor emeritus of political science at Emory University said.

“I mean, the whole gravitational pull towards, you know, finding some sort of, you know, star or celebrity status, individual to run seems to be the perfect recipe to win a primary, but it’s proving to make it more difficult to win a general,” Duncan said.

“Republicans failed to recruit or nominate their strongest candidates in a number of these Senate races and ended up with candidates who I think are struggling as a result,” Abramowitz added.

McConnell’s comments not only highlight the tense battle for regaining a GOP majority but also puts the political future of former President Donald Trump on the ballot in November should his backed Senate candidates not win in the general election.

All three Republican candidates are lagging behind their Democratic opponents, according to FiveThirtyEight’s recent polling average. ​

Now, Republicans are pushing for a more unified message among party leaders and hope candidates start focusing on drilling down delivering a strong conservative policy message.

“Our problems continue to get worse and worse and heavier and heavier and heavier. And to me, that’s forcing Americans back to saying, okay, timeout, I’m gonna have to spend more than 10 seconds watching a commercial before I make my decision or Hey, I’m not gonna just vote for the person that’s the snarkiest on Twitter anymore. I’ve got to go figure out what this person believes on inflation, national security, immigration, all the big issues that are now affecting kitchen tables and boardrooms and everything in between,” Duncan said.