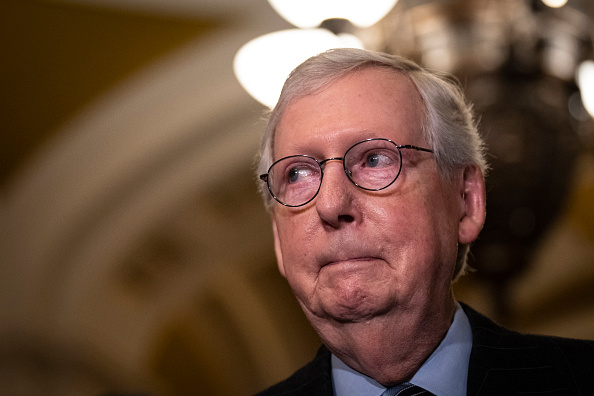 (WASHINGTON) — Sen. Mitch McConnell on Wednesday was comfortably reelected as the GOP leader in the upper chamber despite a challenge — his first in 15 years — and despite intraparty finger-pointing over the GOP’s disappointing performance in the midterms last week.

McConnell had faced opposition from Florida Sen. Rick Scott, who mounted a historic challenge for the post atop the Republican conference.

The leadership vote, done by secret ballot behind closed doors in the ornate Old Senate Chamber, was 37-10, with one member voting present, per Sen Kevin Cramer, R-N.D.

The conference met for three and a half hours.

McConnell, the stolid Kentuckian currently on track to break a Senate record for longest serving leader in history in 2023, had not previously faced any such defiance. The Scott move, recently pushed by former President Donald Trump, surprised many.

Scott, a McConnell critic of late — who clashed with the leader over Republicans not putting forward a plan ahead of the midterms for how they would govern if they gained the majority — exhorted his conference both in a speech behind closed doors on Tuesday afternoon and in a letter to them to make a change from “the status quo.”

Scott, in charge of the GOP campaign arm this cycle in which the party performed far below expectations, explained why he was the better choice over McConnell.

“Like each of you, I am deeply disappointed by the results of the recent election. Despite what the armchair quarterbacks on TV will tell you, there is no one person responsible for our party’s performance across the country,” Scott wrote.

He added, “Unfortunately, we have continued to elect leadership who refuses to do that and elicits attacks on anyone that does. That is clearly not working and it’s time for bold change. The voters are demanding it.”

McConnell minced no words in talking to reporters after the meeting on Tuesday, saying it was a matter of when — not if — he would be elected leader.

“I think the outcome is pretty clear, I want to repeat again, I have the votes and I will be elected,” McConnell said during a news conference. “The issue is whether we do it sooner or later.”

Asked to respond to Scott’s challenge, McConnell said: “I don’t own this job. Anybody in the conference is certainly entitled to challenge me. I welcome the contest.”

Republicans sound off on McConnell, Scott

The GOP conference met for more than three hours Tuesday for what one senator called “a spirited discussion” and another said was “kind of a rhetorical slugfest.”

“It was a really, really, good discussion. People have a desire to be a team and win, but we realize that we’re 50 individuals. The new people (senators) were probably, like, ‘Woah! What’s going on?’ But it was a healthy discussion,” said Sen. Shelley Moore Capito, R-W.Va., a McConnell supporter in line to be elected conference secretary by her colleagues on Wednesday.

About 15 to 20 senators stood to speak at the marathon conference meeting. Sen. Mike Braun, R-Ind., who spoke second, announced that he would be supporting Scott.

“When you measure how we’ve done in recent elections, especially the presidential ones, swing state Senate races, we got to do better,” Braun, who joined the Senate with Scott in 2018, said. “It’s very clear to me, I ran a business for 37 years, that if you don’t have a master plan, a mission statement, which I don’t think we have as a Republican Party, that it’s not going to work. And I think independents elect the swing state senators and the president and that was on view here in these [midterm] elections.”

“I think that when you keep having the same results, and presidential elections, we’ve won one popular vote since, what, 2004? It ought to cause you to have some deep thought about what you need to do differently,” continued Braun.

Republican senators said McConnell appeared surprised by the Scott move but offered a retort eventually, saying that being leader is not an easy thing.

“He counter-punched a time or two … in just the difficulty of the job, which is true. It’s not like any side has a mandate,” Braun told reporters.

According to Sen. Josh Hawley, who said he planned to support Scott, McConnell also took jabs at Scott’s performance in his current role.

“Sen. Scott disagrees with the approach that Mitch has taken in recent years, and he made that clear, and Senator McConnell criticized Senator Scott’s management at the NRSC and I imagine we’ll hear more about that tomorrow,” Hawley said.

As head of the National Republican Senatorial Campaign Committee, Scott controls the purse string of the GOP’s campaign arm. Under his leadership, the NRSC rounded the home stretch of campaign season with relatively little cash on hand, opening Scott to severe criticism, including from McConnell whose Super PAC had to pick up the slack.

“If you’re gonna assess blame for election losses, I don’t know how you trade in the leader for the gentleman at the NRSC,” Sen. Cramer told the Huffington Post.

Multiple GOP senators pointed to the sheer fundraising prowess of McConnell and his aligned super PAC, the Senate Leadership Fund, this cycle, as a top reason to keep him at the helm.

McConnell’s super PAC, according to AdImpact, raised “a total of $205M pooled across nine Senate races.”

Sen. Joni Ernst, currently a member of leadership and McConnell supporter, said she had no problem with the Scott challenge, but she said the Florida Republican failed to make a substantive case for why he should be chosen.

“I do think that elections are okay, and I think if people want to make challenges or throw their name in, I think that’s fine,” said Ernst, R-Iowa. “But what they have to do is present a real plan on what they want to see for the future of our conference, and I didn’t necessarily hear that coming from Rick Scott. He had a lot of things that he wanted to air out his grievances about, but we haven’t heard a conclusive plan yet.”

But Scott actually did offer a plan for the party in advance of the midterms. In February, he put forward his “12 Point Plan to Rescue America.” It made him no friends on either side of the aisle.

Congressional Democrats and the White House alike lambasted the Scott proposal, quickly turning it into a talking point. McConnell scorched Scott for suggesting that Republicans might raise income taxes.

“Let me tell you what would not be a part of our agenda,” McConnell said in March, shortly after Scott announced his plan. “We will not have as part of our agenda a bill that raises taxes on half the American people and sunsets Social Security and Medicare within five years.”

The public disagreement was the earliest sign that the relationship between McConnell and Scott was beginning to fracture. Trump, who has made his disdain for McConnell public, even nudged Scott to challenge McConnell for his seat, adding salt to the wound.

But while several Trump-aligned senators are expected to support Scott’s bid during the closed-door vote, it’s clear most Senate Republicans are prepared to keep McConnell a top the party.

Asked on Tuesday whether he thought Scott had any chance, Sen. Thom Tillis, R-N.C., was blunt: “Not at all. Not at all.”