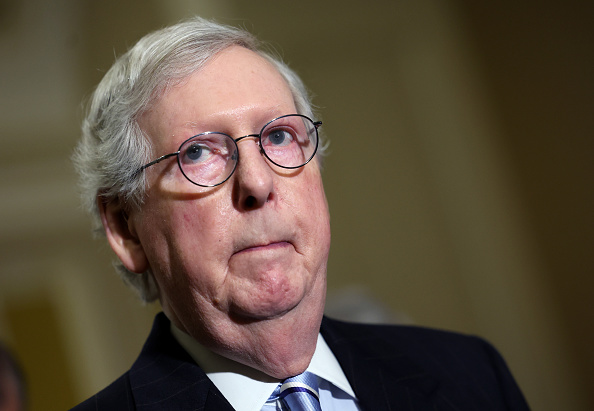 (WASHINGTON) — On Tuesday, for the second week in a row, Senate Republican leader Mitch McConnell cast serious doubt on Donald Trump’s ability to become the president in 2024 — without mentioning him by name.

“Anyone seeking the presidency who thinks that the Constitution could somehow be suspended or not followed, it seems to me, would have a very hard time being sworn in as the president of the United States,” McConnell said at the start of his weekly news conference.

He was referencing Trump’s recent social media post that repeated baseless claims of widespread election fraud and called for the “termination of all rules, regulations, and articles, even those found in the Constitution.”

Tuesday saw McConnell’s first comment on Trump’s call to terminate the Constitution, which Trump made Saturday on Truth Social before walking it back on Monday — but it’s the second time McConnell has started his week by casting doubt on Trump’s third bid for the White House.

“Anyone meeting with people advocating that point of view, in my judgment, are highly unlikely to ever be elected president of the United States,” McConnell said then. Trump responded in a statement to Fox News, saying in part: “Mitch is a loser for our nation and for the Republican Party.”

Asked directly on Tuesday if he could categorically rule out supporting Trump in 2024, McConnell repeated that view.

“What I’m saying is it’d be pretty hard to be sworn into the presidency if you’re not willing to uphold the Constitution. That’s what I said, and I just said it again,” McConnell added.

While McConnell was a close ally to the Trump White House, aiding his legislative priorities and speedy confirmations of Trump’s judicial nominees, the two have become estranged in the wake of Jan. 6.

McConnell blamed Trump from the Senate floor following the attack for having “provoked” and “fed lies” to the mob, while Trump has since taken to mocking McConnell as a “loser.”

The former president, on Monday, attempted to downplay his Constitution comment on Truth Social in the face of backlash but has not deleted his original post. A growing number of Republicans in Congress have now condemned his call to terminate the Constitution because of his false election claims, but House Leader Kevin McCarthy, on a quest to become speaker, has maintained his silence.

Trump is so far the GOP’s sole announced candidate for the presidency in 2024.