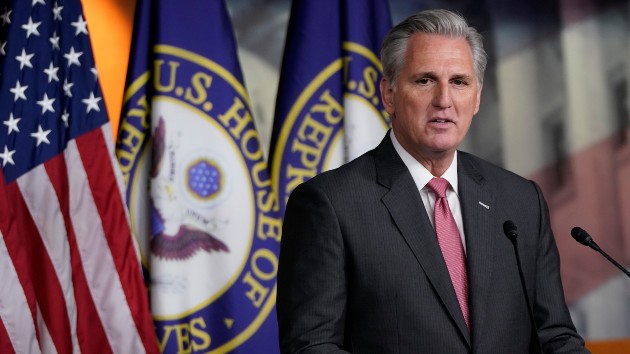 (WASHINGTON) — House Republican Leader Kevin McCarthy on Tuesday broke his silence on the bipartisan Jan. 6 commission proposal negotiated by one of his key lieutenants, saying in a new statement that a new commission would be “duplicative” of federal law enforcement efforts and “potentially counterproductive.”

While the proposed panel would give both parties equal representation in appointees to the commission and require bipartisan agreement for subpoenas, McCarthy said he wants the effort to expressly include a review of “political violence” in American cities last summer amid racial justice protests.

But Rep. John Katko, R-N.Y., said the panel could decide to investigate or review such episodes if the appointees agreed to do so, even if not explicitly stated in the legislation.

McCarthy’s statement comes after Rep. Liz Cheney suggested in an interview with ABC News that he testify before any commission regarding his conversations with Trump on Jan. 6 and attempts by several conservatives to whitewash the events of that day.

The bill is expected on the floor this week and can still pass without GOP votes. But McCarthy’s opposition could give cover to more Republicans in the House and Senate to oppose the proposal and try to depict it as partisan.

“Given the political misdirections that have marred this process, given the now duplicative and potentially counterproductive nature of this effort, and given the Speaker’s shortsighted scope that does not examine interrelated forms of political violence in America, I cannot support this legislation,” McCarthy said in a statement.

Republicans conducted roughly a half dozen investigations into the 2012 Benghazi attack. And the 9/11 attack was investigated by several congressional committees before the 9/11 Commission began its work.