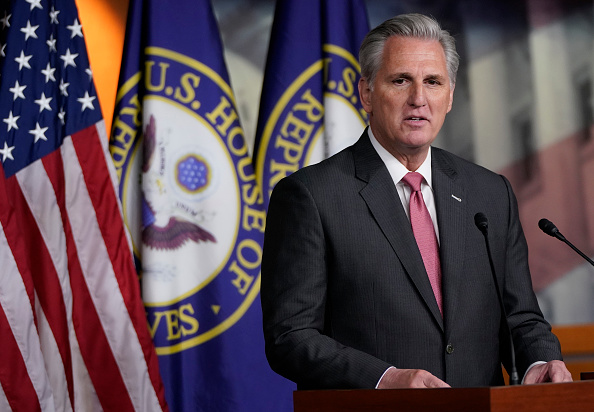 (WASHINGTON) — House Republican leader Kevin McCarthy and other GOP leadership hopefuls will go before their caucus on Tuesday afternoon in a vote to determine who will head the Republican conference next year as the party looks to win a razor-thin majority.

McCarthy is seeking the speakership and has the backing of others in leadership, like Minority Whip Steve Scalise, though the disappointing midterm cycle has fueled discontent from some conservatives like Reps. Matt Gaetz and Andy Biggs, the latter of whom plans to challenge McCarthy.

The behind-closed-door leadership election, which followed pitches to fellow members from McCarthy and others on Monday, could be a prelude to the more consequential vote in January, if the GOP retakes the House. That’s when McCarthy would need 218 votes from the chamber to become speaker — and the highest-ranking Republican in federal government, second in line to the presidency.

Already, the hardline House Freedom Caucus has been maneuvering to block McCarthy’s speakership before the internal vote on leadership on Tuesday, and some allies of Donald Trump have urged him to bearhug the former president tighter to win enough support.

“If Kevin McCarthy wants to be speaker, he must be much more declarative that he supports President Trump,” Jason Miller, who worked on Trump’s 2016 and 2020 campaigns, said on Friday on Steve Bannon’s “War Room” podcast.

The midterm election results, which McCarthy and others had projected would carry Republicans into the House majority with dozens of seats flipped, instead saw them projected to eke out, at most, a small majority comparable to what Democrats hold now.

That has potentially roiled leadership bids in both the House and the Senate: Conservatives inside and outside Congress launched a pressure campaign for at least a delay until next month’s Georgia Senate runoff is done.

“The Republican Party needs leaders who will confidently and skillfully present a persuasive coherent vision of who we are, what we stand for, and what we will do. Many current elections are still undecided. There should be no rushed leadership elections,” more than 60 conservative figures wrote in a letter on Monday.

“Conservative Members of the House and Senate have called for the leadership elections to be delayed. We strongly urge both Houses of Congress to postpone the formal Leadership elections until after the December 6 runoff in Georgia and all election results are fully decided.”

McCarthy’s path to the speakership could be shaped by the Freedom Caucus, a group of populist rabble-rousers who clashed with John Boehner and Paul Ryan, the two previous GOP House speakers.

Biggs, of Arizona, said Monday night that he would be put forward as the potential speaker at Tuesday’s vote.

Some other conservatives have suggested that Rep. Jim Jordan, R-Ohio, a McCarthy ally and Freedom Caucus co-founder, could jump off the uncertainty from Biggs’s challenge to run for speaker too.

“We have an opportunity to have a paradigm-shattering victory [on] the speakership to either be able to get Jim Jordan in as speaker — I don’t care if he’s not running right now — or to have a coalitional-style government where every decision goes through [the House Freedom Caucus],” Russ Vought, the White House budget director in the Trump administration, told Steve Bannon during a Friday interview, pushing for a “wartime speaker.”

Gaetz, of Florida, who is not a Freedom Caucus member, said Monday that the Republicans’ small majority would give outsized sway to McCarthy dissenters like him.

“Every five people is essentially a veto now. That means that it’s probably not going to be Kevin McCarthy as speaker, because there are five of us would not want to see him,” Gaetz said on Charlie Kirk’s show. “It is probably not going to be somebody like Jim Jordan, who I would prefer, because here are probably five people who don’t like him. So, we’ve got to go down the list of the Republicans and see who could actually unite a conference.”

McCarthy has support from some right-wing members of the caucus, with Georgia Rep. Marjorie Taylor Greene saying the Freedom Caucus’s maneuvers amount to “bad strategy.”

McCarthy will only need a majority of the Republican conference to support him on Tuesday and he’s expressed confidence that he’ll clinch the nomination.

Heading into the first GOP conference meeting this week, he said he “feels like we just won the majority.” When asked if he had votes for speaker he said “couldn’t be speaker if I couldn’t.”

Scalise, of Louisiana, the current House GOP whip who is anticipated to become House majority leader, was more bullish, saying ” McCarthy “will be speaker.”

Oklahoma Rep. Tom Cole, the top Republican on the rules committee, which would govern the timing of the leadership vote, added that there’s “nothing to gain” by postponing the vote and credited the millions McCarthy donated to other Republicans with helping with the majority, slim as it may be.

“Well, it’s certainly slimmer than we would have hoped. But that, to me, that makes it all the more imperative you need somebody there that knows how to run the ship. And again … absent Kevin McCarthy, we wouldn’t be going into the majority,” he said.

And in a sign that the Freedom Caucus isn’t completely sold on an effort to block a McCarthy speakership, Rep. Scott Perry of Pennsylvania said he spoke with McCarthy on Monday and that the conversation “went well.”

“We’re going to let the conference decide, and I’ll make my decision based on what I see and what I hear,” he said.

Beyond speaker, Republicans are also choosing their picks for other leadership positions.

Reps. Jim Banks of Indiana, Tom Emmer of Minnesota and Drew Ferguson of Georgia are running for the whip position opened by Scalise’s likely promotion.

Katherine Faulders, Lauren Peller, Will Steakin and Trish Turner contributed to this report.