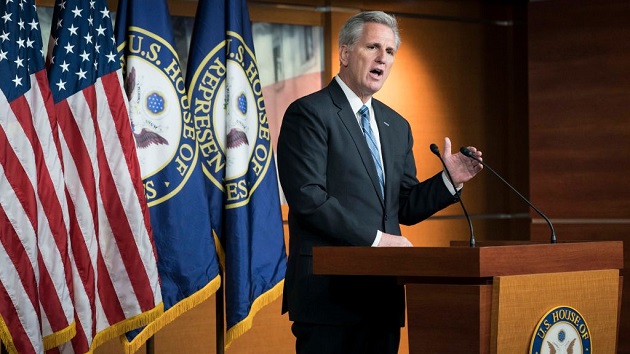 (WASHINGTON) — Speaker Kevin McCarthy and leading Republicans are expected to soon make good on a vow to keep three Democrats from seats on influential committees in the new House.

“Speaker McCarthy confirms that Adam Schiff, Eric Swalwell, and Ilhan Omar are getting kicked off the Intel and Foreign Affairs Committees. Promises made. Promises kept!” Rep. Troy Nehls, a member of the conservative House Freedom Caucus, tweeted on Tuesday.

McCarthy has long pledged to oust the three, citing objections to their behavior and the precedent of the previous House removing committee assignments for Republican Reps. Marjorie Taylor Greene of Georgia and Paul Gosar of Arizona.

In those cases, the Democratic majority and some Republicans in the House voted to remove Greene and Gosar over their inflammatory conduct, including Greene spreading conspiracy theories — some of which she has since renounced — and Gosar sharing an animated social media video depicting violence against President Joe Biden and Rep. Alexandria Ocasio-Cortez. (Gosar said amid the controversy, “I do not espouse violence.”)

House Majority Leader Steve Scalise was asked during a press conference on Tuesday what the process would be for stripping members of their assignments and said no one had yet been assigned to committees. But he suggested removals were a new standard first set by Democrats.

“As we see what comes out, the Democrats set a precedent that we urged them strongly not to go down last Congress,” Scalise said.

“They decided that they were going to break the precedent that had been in place for over 200 years and remove members of the opposing party that our party selected to be on committees,” he continued. “And so that was a practice they set and so, obviously, we’re going to be looking very closely at who they appoint. They haven’t appointed anybody yet to committees, but we’re gonna see if they do.”

After Republicans won back the House in November, McCarthy reiterated to Fox News that he planned to keep the three Democrats from their committee posts.

Rep. Pete Aguilar, the chair of the House Democratic caucus, on Tuesday declined to elaborate on next steps should Schiff and Swalwell be blocked or booted by Republicans from the intelligence panel.

“We will send the names of the individuals who this caucus supports and are qualified to serve on committees,” Aguilar told reporters. “What the speaker does beyond that is something that we will handle … but it isn’t anything we’re going to get in today.”

Schiff previously discussed the potential removal of his committee assignment during a November interview with ABC “This Week” co-anchor Jonathan Karl.

McCarthy has accused Schiff of lying to the public during references to a disputed dossier that claimed to outline links between former President Donald Trump’s 2016 campaign and Russia.

McCarthy has also called Swalwell a “national security threat” for Swalwell’s reported run-ins with an alleged Chinese spy, stating there’s no way he should be allowed to serve on the committee.

Swalwell has not been accused of wrongdoing and he has said he stopped contact with the woman after federal authorities briefed him, according to the Associated Press.

Separately, McCarthy’s criticized Omar over what he described as her “repeated antisemitic and anti-American remarks.” Omar has previously apologized for some of her statements, including about lobbyists on behalf of Israel’s government.

Omar has also fired back at McCarthy, accusing him of amplifying rhetoric targeting minorities.

“What it does is gin up fear and hate against Somali-Americans and anyone who shares my identity, and further divide us along racial and ethnic lines,” she said.