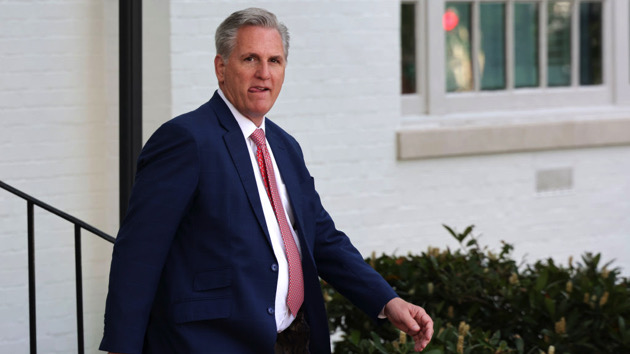 (WASHINGTON) — House Republicans on Wednesday rallied behind Minority Leader Kevin McCarthy as he defended himself over audio recordings surfaced of him blaming former President Donald Trump for the Jan. 6 riot and suggesting that some GOP lawmakers were inciting violence and should be kicked off social media platforms.

In the first closed-door GOP meeting since the New York Times released recordings of a Jan. 10, 2021, leadership call in which McCarthy was sharply critical of Trump and some hard-right members of Congress, the California Republican argued that he was speaking hypothetically and walking through various “scenarios” following the attack on the Capitol as Congress met to certify the 2020 election results.

“He said that, you know, they were speculating on different scenarios,” Rep. Robert Aderholt, R-Ala., told ABC News. “He said they were laying out different things of what could be, and he said he never accused anyone of anything.”

“I think the majority of the conference understood,” one GOP member told ABC News, adding that McCarthy claimed the tapes were “taken out of context by the New York Times.”

McCarthy received a standing ovation and a round of applause after his remarks, multiple lawmakers told ABC News.

“We’re coming together as a team,” Rep. Ronny Jackson, R-Texas, told ABC News, adding that Republicans wouldn’t “let leaked audio tapes sent to the press pose a part we’ve got bigger things to do. We’re all on the same page.”

Still, his explanation did little to satisfy some of McCarthy’s persistent critics, including Rep. Matt Gaetz, R-Fla.

Asked if he had confidence in McCarthy after the meeting, Gaetz replied, “No more or less than usual.”

Gaetz criticized Rep. Steve Scalise, R-La., in the meeting over comments made on the recording obtained by the New York Times. The Louisiana Republican suggested Gaetz’s comments attacking Rep. Liz Cheney, R-Wyo., in television appearances after the Capitol riot were “potentially illegal.”

At one point, GOP Rep. Marjorie Taylor Greene, R-Ga., even chimed in and demanded Scalise apologize to Gaetz. An apology was not offered, according to a source familiar with the exchange.

McCarthy was also critical of Gaetz on the recording, and discussed Greene as well as GOP Reps. Louie Gohmert of Texas and Mo Brooks of Alabama.

Of Trump, McCarthy said, “I’ve had it with this guy,” and told other GOP leaders on the recorded call that “what he did is unacceptable.”

He also suggested he would tell Trump “it would be my recommendation you should resign,” and that some Republicans who made inflammatory comments on and around the Capitol riot should be taken off Twitter.

“Can’t they take their Twitter accounts away, too?” he said, according to the audio.

McCarthy initially denied the New York Times reporting, calling it “false.” After the reporters published the audio recordings of the comments, McCarthy told GOP lawmakers that he had spoken with former President Trump and that he still supported McCarthy.

“He basically said we need to keep on track and keep pushing forward with what we’re doing,” Rep. Barry Loudermilk, R-Georgia, said after the meeting. “This is a distraction by the left trying to drive a wedge in a very unified Republican Party.”

“Kevin McCarthy is a great leader and he will be a great speaker,” said Rep. Buddy Carter, R-Ga.

While few Republicans publicly criticized McCarthy after the meeting, others suggested they still needed to digest the episode and McCarthy’s actions.

“I think I’m going to talk to him in private,” said Rep. Debbie Lesko, R-Ariz. “I’m glad he talked about what was said.”